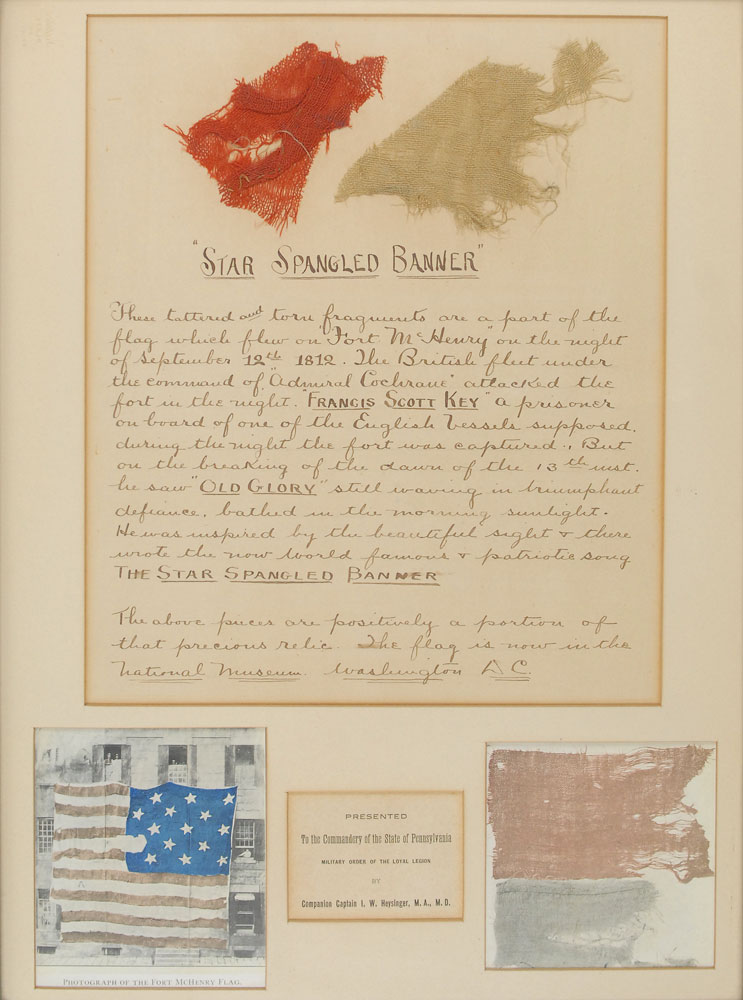 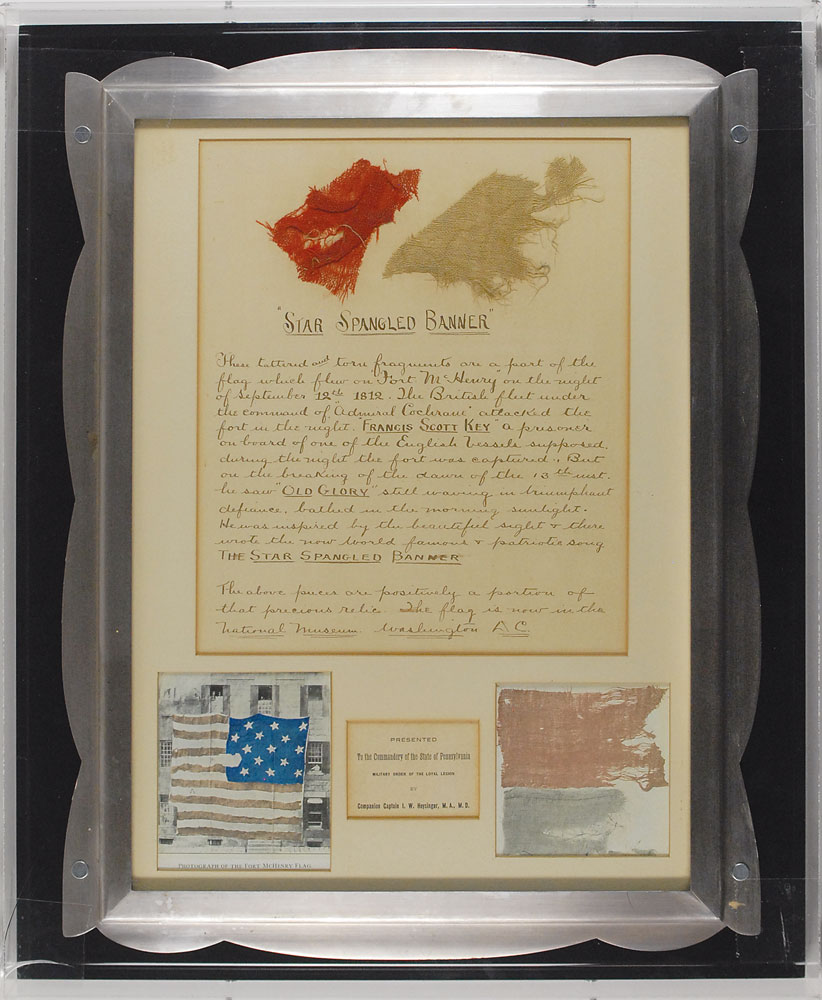 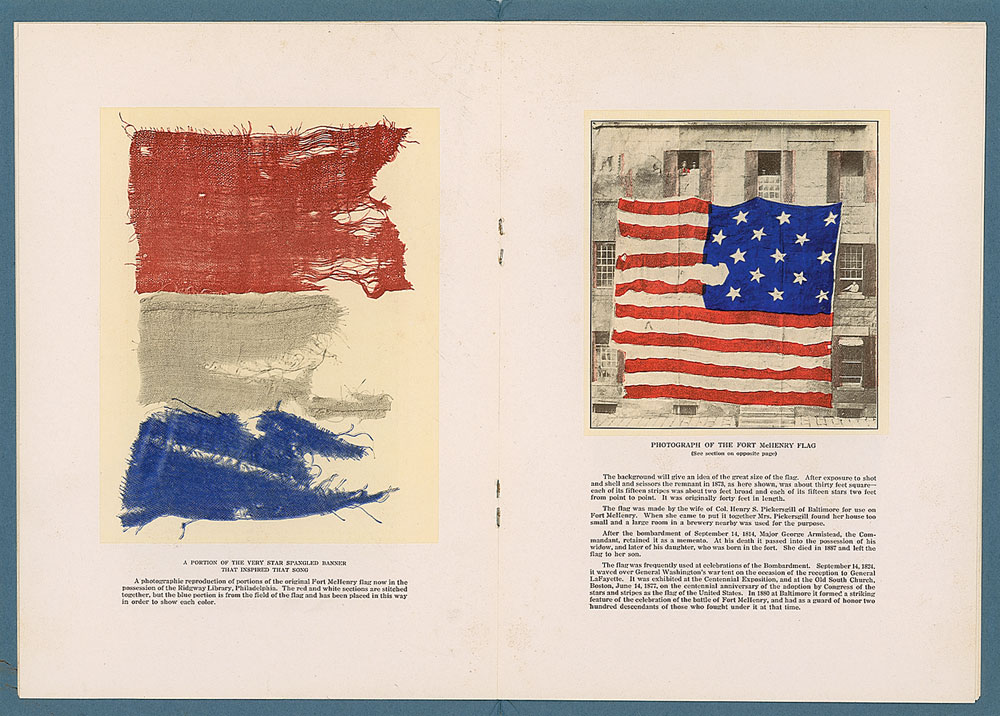 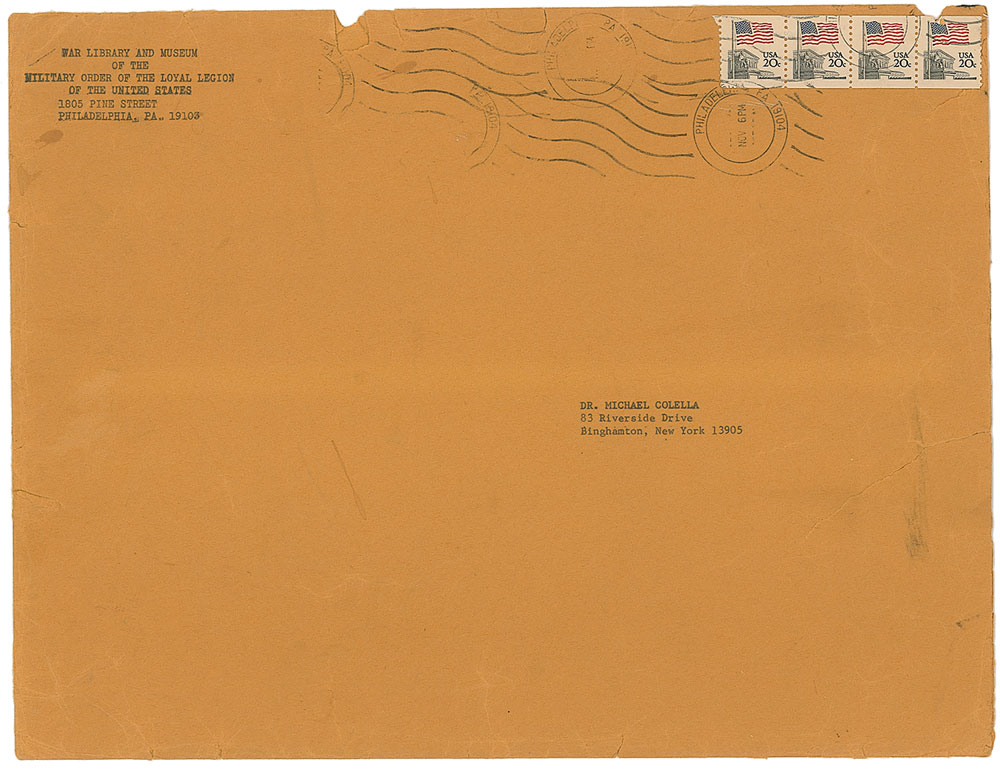 Astounding and superbly documented pair of fabric fragments from the actual 'Star Spangled Banner' flag that inspired Francis Scott Key to write America's national anthem after witnessing the bombardment of Fort McHenry by British ships during the War of 1812, during which an American flag continued to fly strong over the fort. Each swatch measures approximately 3 x 3 and is mounted to a descriptive manuscript penned by Isaac Winter Heysinger, who originally presented the fragments to the Loyal Legion War Library and Museum in Philadelphia. His manuscript, entitled "Star Spangled Banner," reads: "These tattered and torn fragments are a part of the flag which flew on Fort McHenry on the night of September 12th 1812. The British fleet under the command of 'Admiral Cochrane' attacked the fort in the night. 'Francis Scott Key' a prisoner on board on one of the English vessels supposed during the night the fort was captured. But on the breaking of dawn on the 13th inst. he saw 'Old Glory' still waving in triumphant defiance, bathed in the morning sunlight. He was inspired by the beautiful sight & there wrote the world famous & patriotic song The Star Spangled Banner. The above pieces are positively a portion of that precious relic. The flag is now in the National Museum, Washington DC." The swatches and manuscript are impressively matted and framed with the original presentation card and two images of the flag to an overall size of 19 x 23; this superior quality display was custom built for the items while they were in the possession of the Loyal Legion.

The famous flag was commissioned by George Armistead upon taking command of Fort McHenry in June 1813, requesting ‘a flag so large that the British would have no difficulty seeing it from a distance.' Baltimore seamstress Mary Young Pickersgill was selected for the work, and she, along with several employees, crafted a massive flag that measured 42 feet across and 30 feet tall. Armistead remained commander on the night of the bombardment, which took place on September 14, 1814 (erroneously dated two days earlier in Heysinger's manuscript accompanying the flag swatches). Major Armistead kept the flag as a souvenir for the great victory in the battle, passing it down through generations; Armistead's widow left it to their youngest daughter, Mrs. William Stuart Appleton, who then left it to her son Eben. Eben Appleton loaned the flag to the Smithsonian in 1907 where it was placed on official display for the first time, eventually making it a permanent gift. When the flag was given to the Smithsonian, eight feet were missing from the fly, and a portion had been cut from the canton—many of these pieces had been distributed by Armistead and his descendants as souvenirs.

Further provenance is provided in a booklet published in 1914 in Philadelphia by John Wanamaker to commemorate the battle's 100th anniversary, featuring a color image of these fragments inside. A photocopy of a 1969 letter from the Smithsonian's Donald E. Kloster to the Union League of Philadelphia is also present, in which he asks for further details about the flag fragments from the Loyal Legion held in their collection; he goes on to write that the Smithsonian had 'come across some fragments of the flag that apparently were given by Colonel Armistead to various people during the time he had it.' Also accompanied by a 1982 letter from The War Library and Museum of The Military Order of the Loyal Legion of the United States, mentioning the deaccession of these fragments and transmitting information about Isaac Heysinger, who served in the Union Army as a member of the Rhode Island cavalry. He had interest in a variety of fields, and wrote numerous articles on music, art, science, economics, religion, and history, including several books on the Civil War. Additionally, he held over 100 patents and owned one of the finest art collections in the United States. An incredible opportunity to own substantial fragments of the most iconic flag in American history.