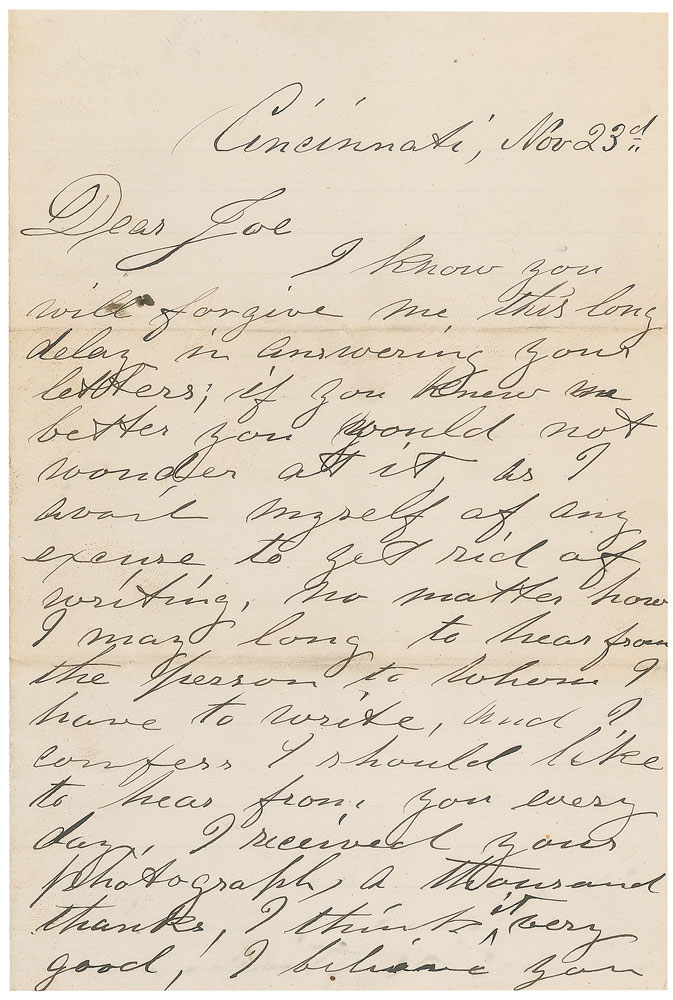 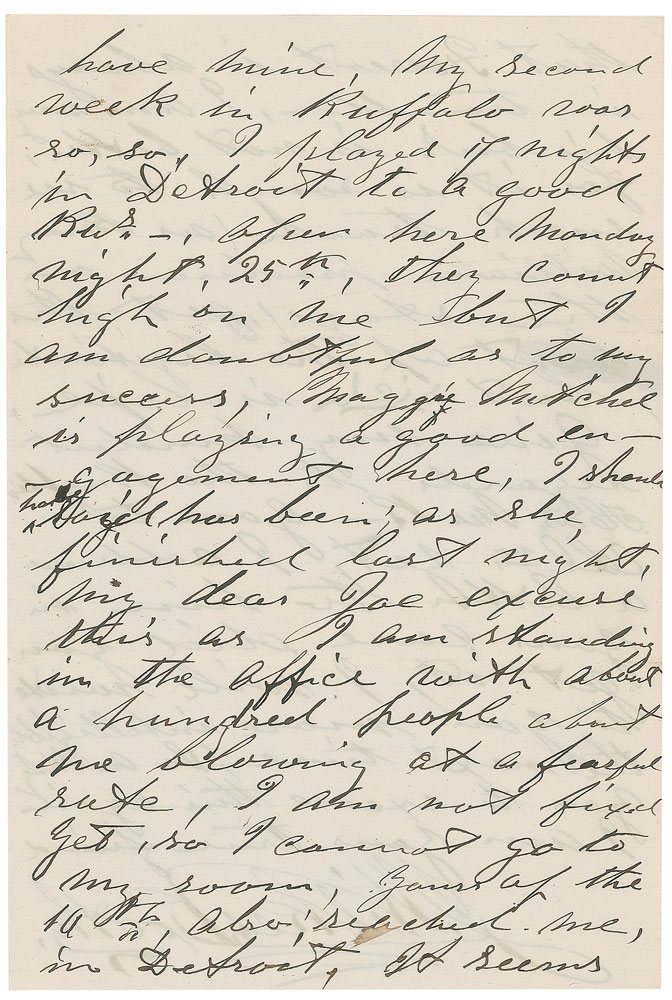 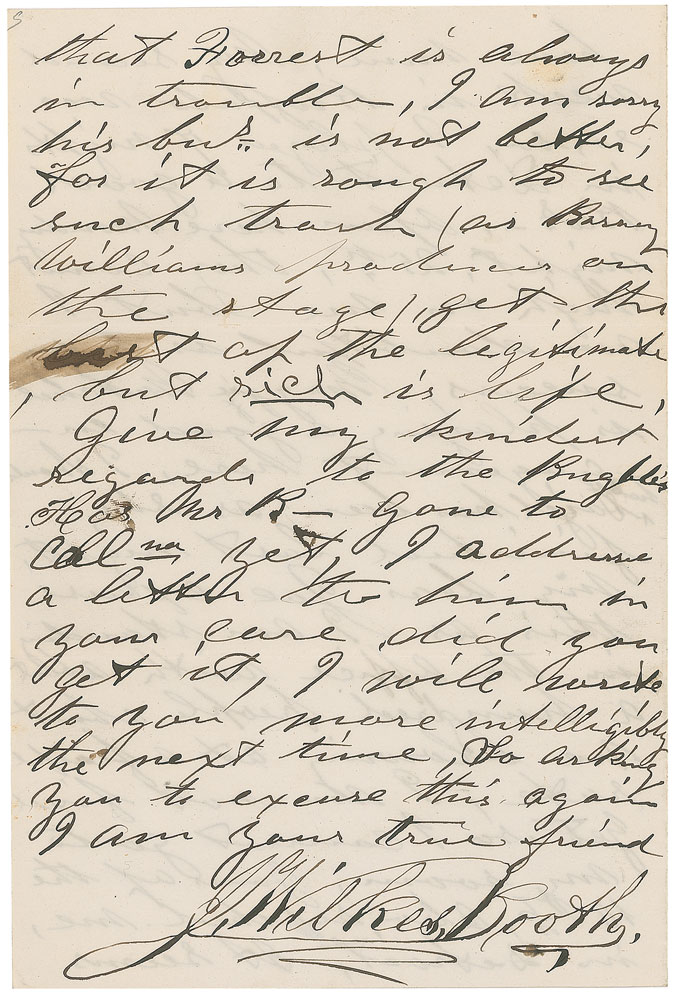 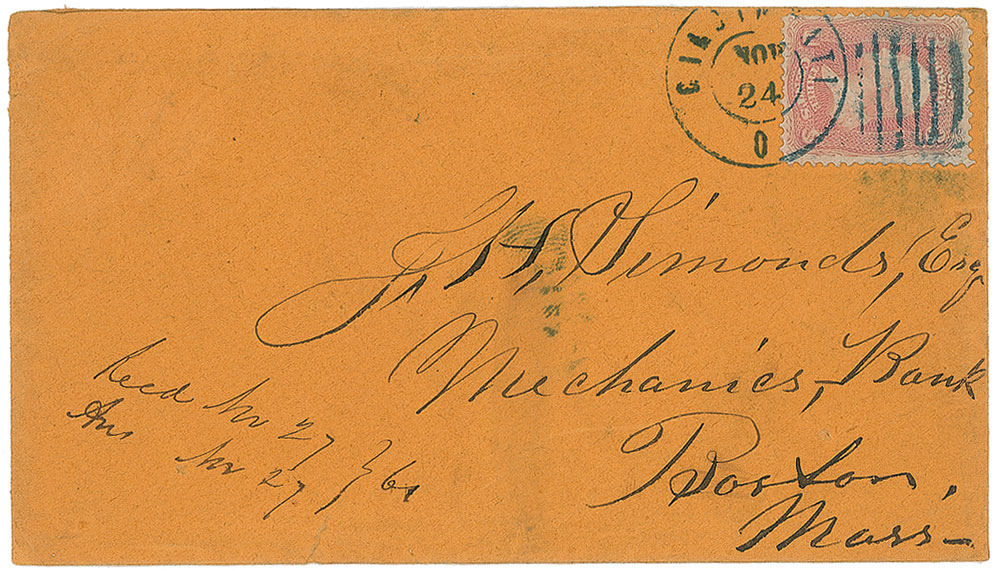 War-dated ALS signed “J. Wilkes Booth,” three pages on two adjoining sheets, 5.25 x 8, November 23, 1861. Letter written from Cincinnati to Joseph H. Simonds. In full: “I know you will forgive me, this long delay in answering your letters; if you knew better you would not wonder at it, as I avail myself of any excuse to get rid of writing, no matter how I may long to hear from the person to whom I have to write. And I confess I should like to hear from you every day. I received your photograph, a thousand thanks, I think it very good, I believe you have mine. My second week in Buffalo was so, so. I played 17 nights in Detroit to a good Bus[iness]. After here Monday night, 25th, they count high on me but I am doubtful as to my success. Maggie Mitchel is playing a good engagement here.”

At this point in the letter, Booth’s handwriting begins to get a bit more jumbled. He continues: “I should have has been; as she finished last night. My dear Joe excuse this as I am standing in the office with about a hundred people about me blowing at a fearful rate. I am not fixed yet, so I cannot go to my room. Yours of the 16th also reached me, in Detroit. It seems that Forrest is always in trouble. I am sorry his bus. is not better, for it is rough to see such trash (as Barney Williams practices on the stage), get the best of the legitimate, but such is life. Give my kindest regards to the Bugbee's. Has Mr. B. gone to Cal. yet? I addressed a letter to him in your care, did you get it. I will write to you more intelligibly the next time, so asking you to excuse this again.” Mild toning along two horizontal mailing folds, and a couple light brushes to text, otherwise fine condition. Accompanied by the original mailing envelope, addressed in Booth’s hand and docketed by Simonds, bearing a very scarce 3¢ pink of 1861 (Scott 64) stamp.

Published in Right or Wrong, God Judge Me: The Writings of John Wilkes Booth, ed. J. Rhodehamel and L. Taper, pp. 74-75, Provenance: The Calvin Bullock Collection (Sale, Christie's, 19 December 1986), lot 14 [ envelope then present]; anonymous owner (Sale, Christie's, 14 June 2005, lot 335).
On November 25, 1861, Booth opened a 10-day engagement at Wood’s Theater in Cincinnati, appearing in such favorites as Othello, Macbeth, Hamlet, and the Marble Heart—a role that Lincoln once watched him perform. Standing in a hotel lobby two days prior, he penned this unusually long letter to his close friend and Boston banker Joseph Simonds; highlighting his deep involvement in the theater world, he offers several references to some of the biggest actors of the day—the scandal-plagued Edwin Forrest, President Lincoln’s favorite rising star Maggie Mitchell, and the Irish-born comic actor Barney Williams.

Two years later, Simonds helped Booth handle his shares in a Pennsylvania oil venture, overseeing its production while Booth remained on tour. As the actor’s theatrical income declined during the war, Simonds loaned him money to help him get by, inadvertently contributing funds to an abortive plot to kidnap the president in March of 1864. Following Lincoln’s assassination, Simonds was summoned to testify about their financial dealings during the Lincoln conspirators’ trial in May of 1865. An incredibly rare letter, desirable both in its glimpse into the famed actor’s touring stage life and in its connection to a friend who would later have to answer for himself during one of America’s darkest hours.