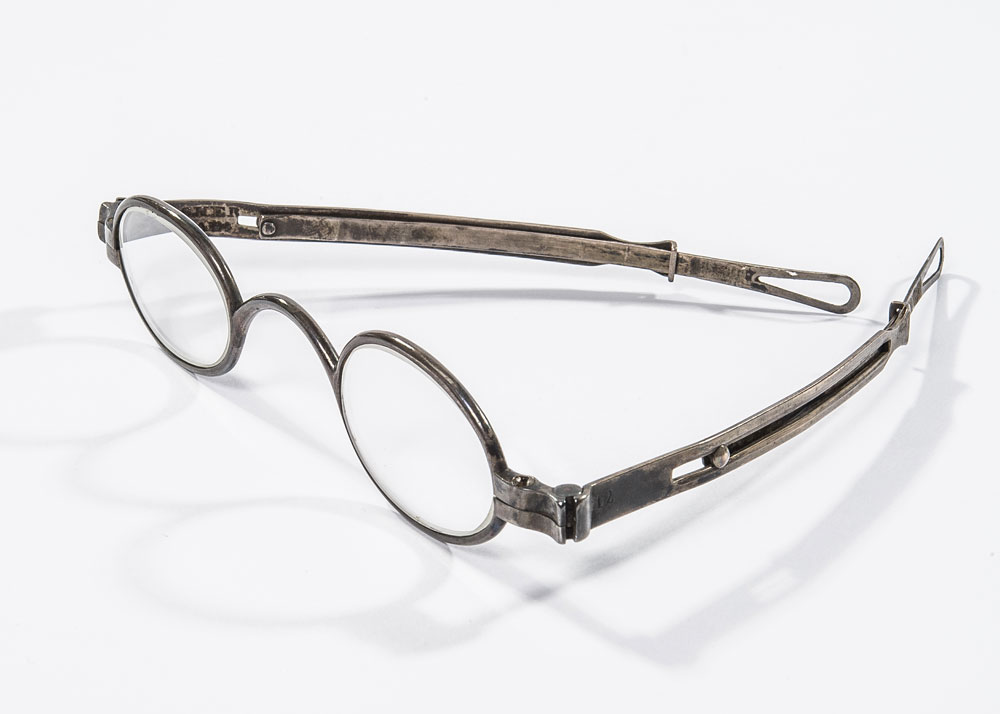 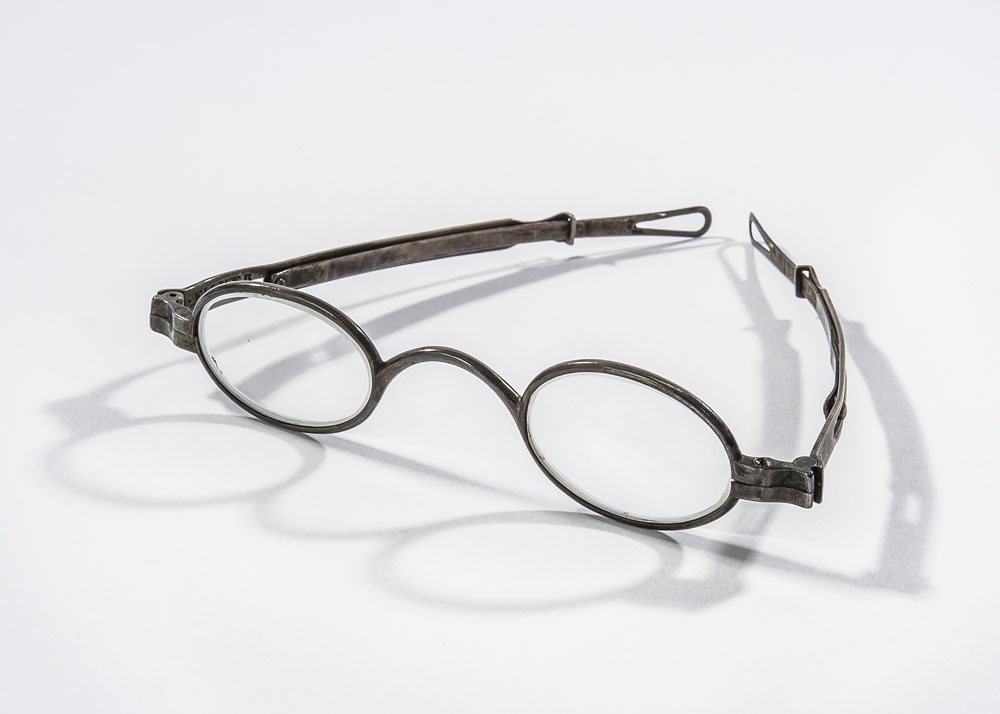 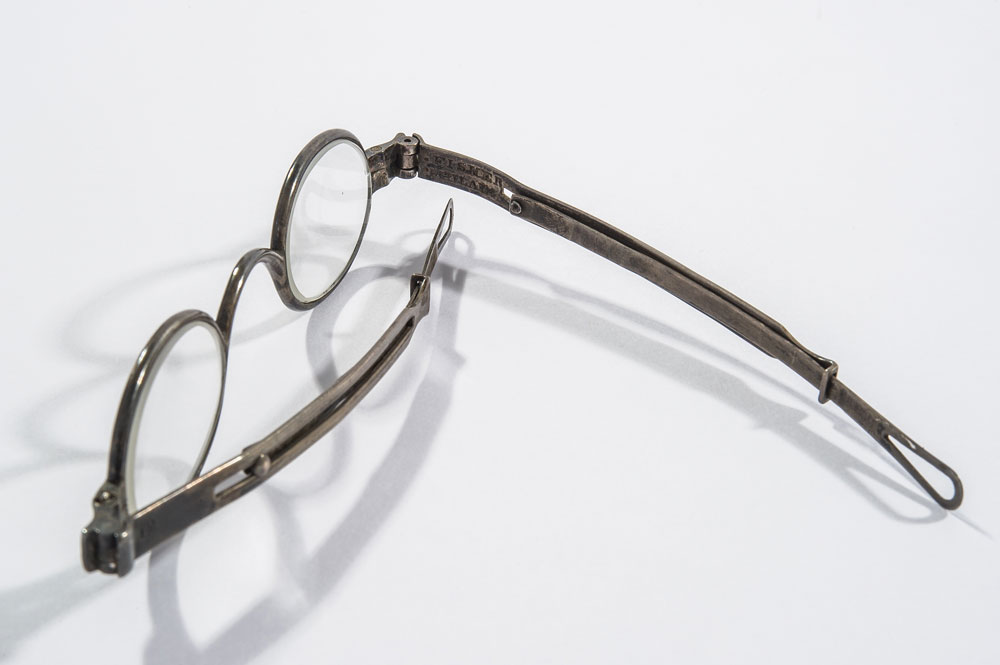 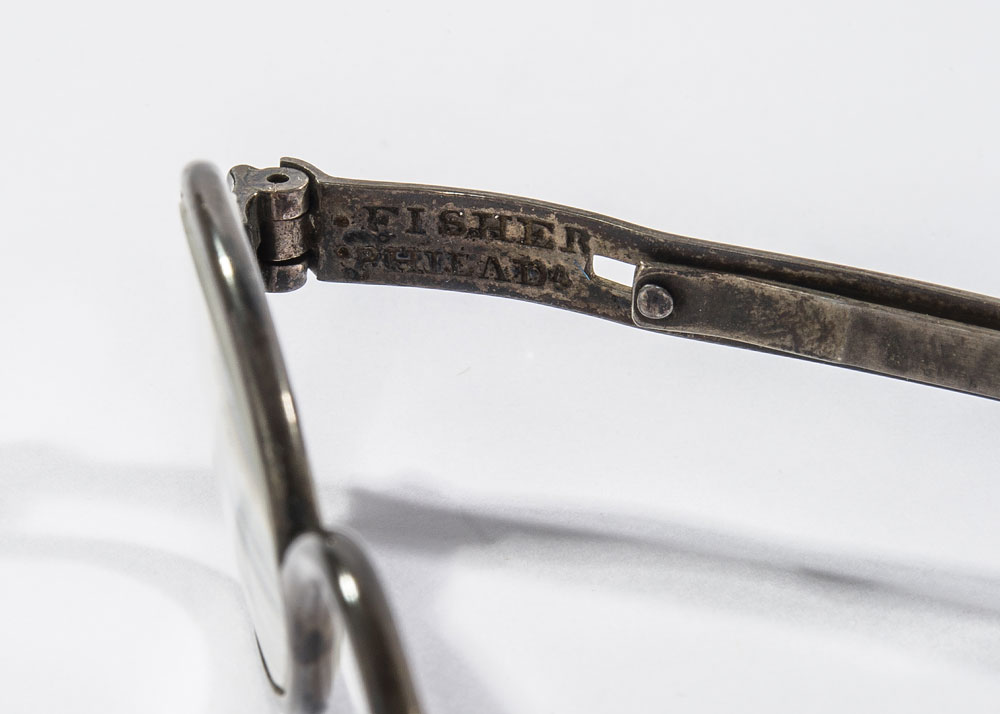 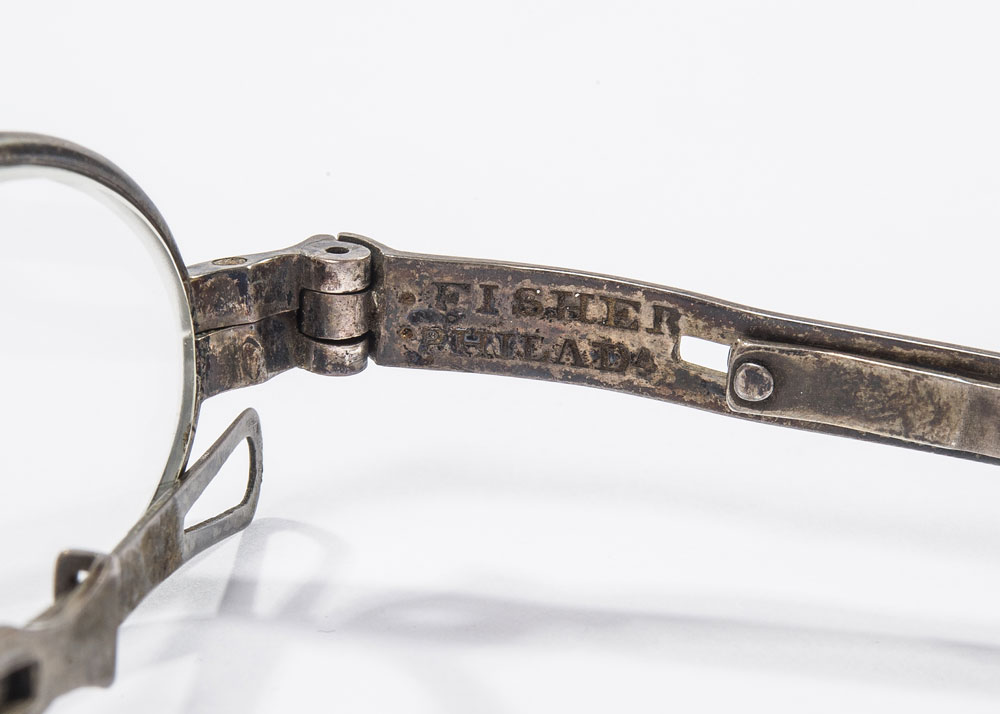 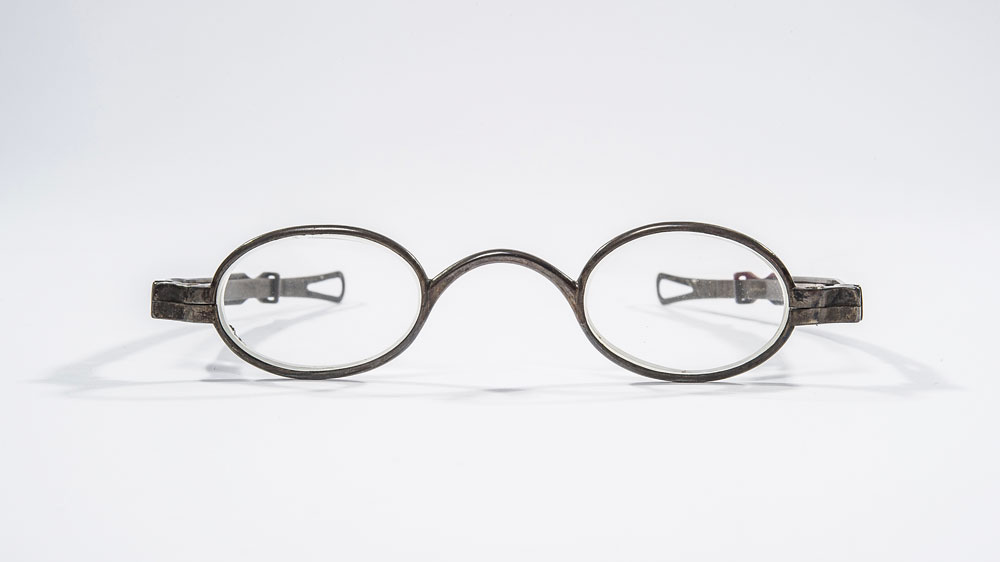 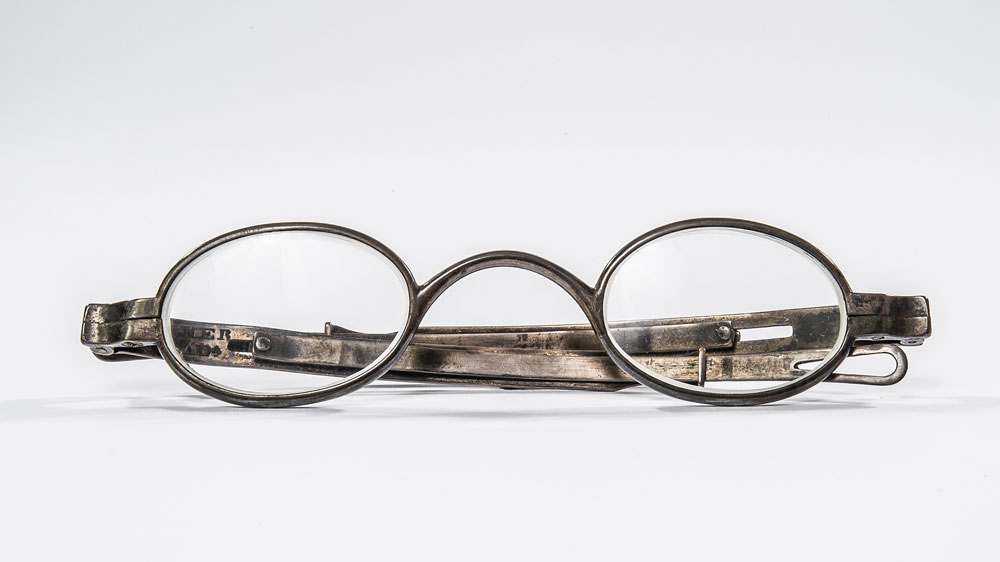 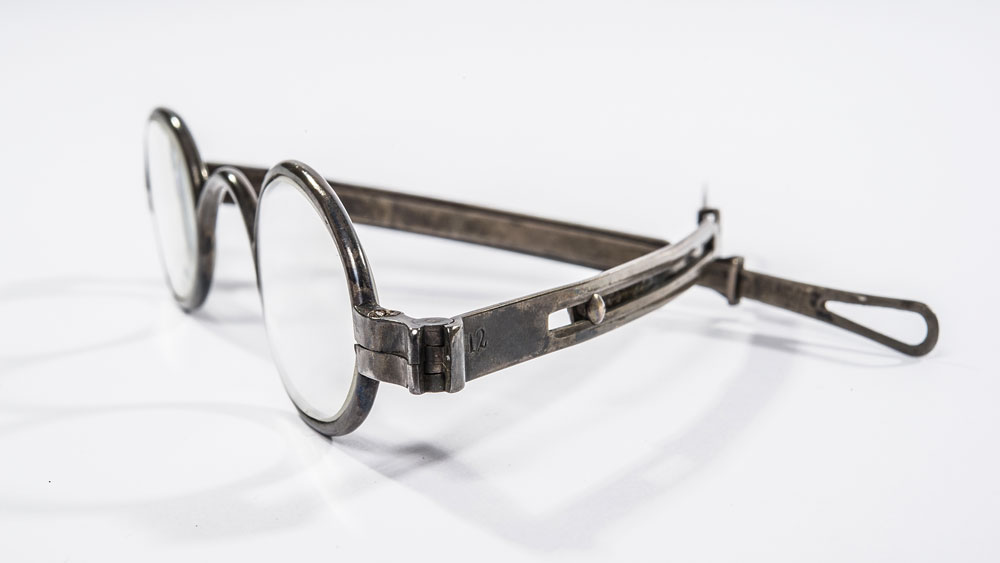 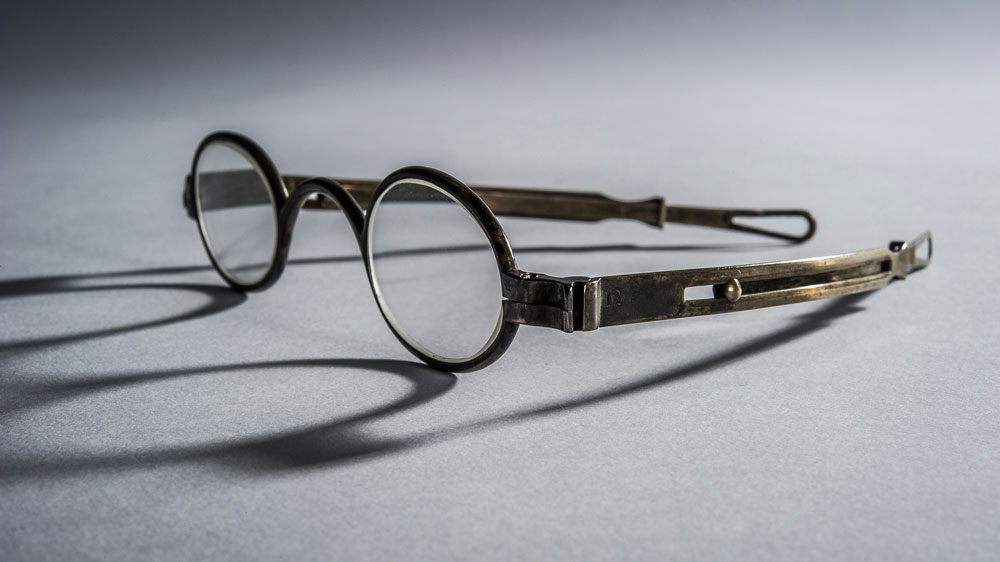 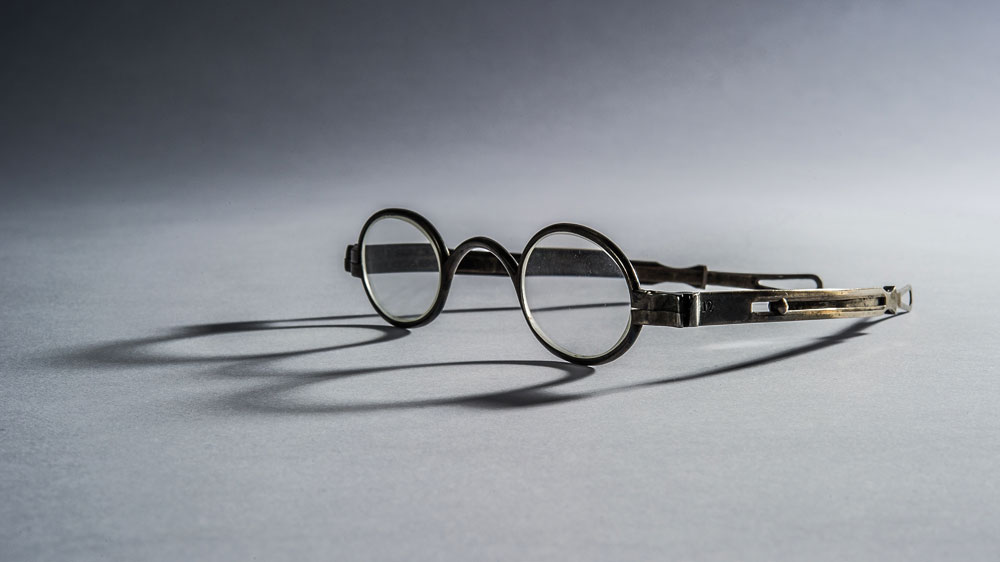 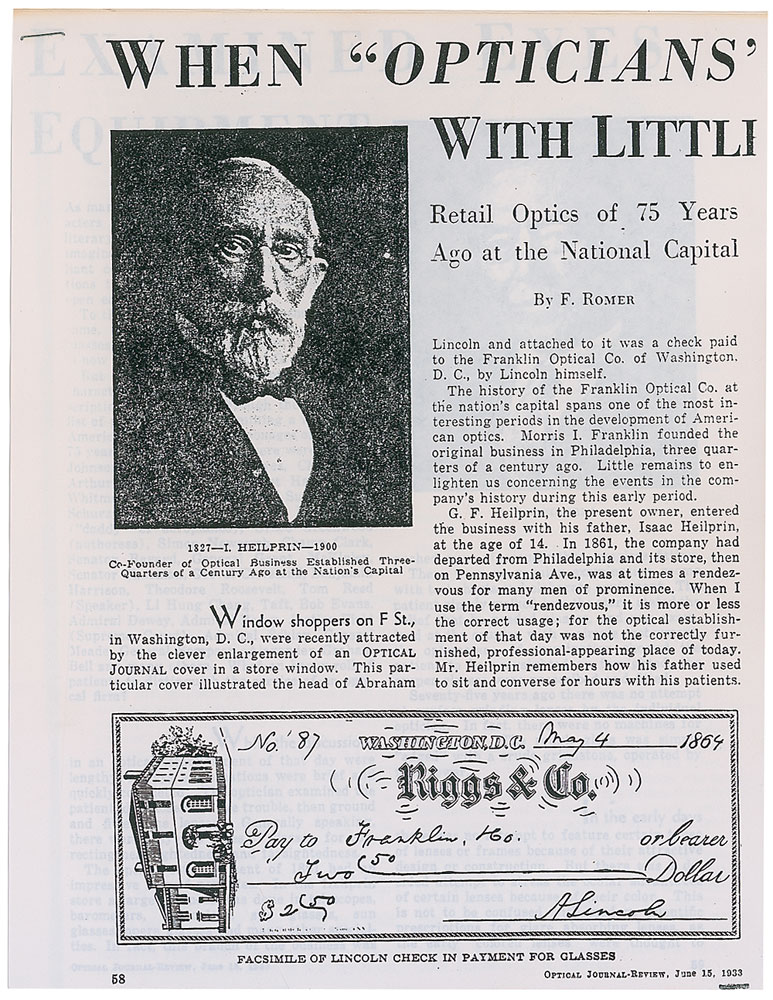 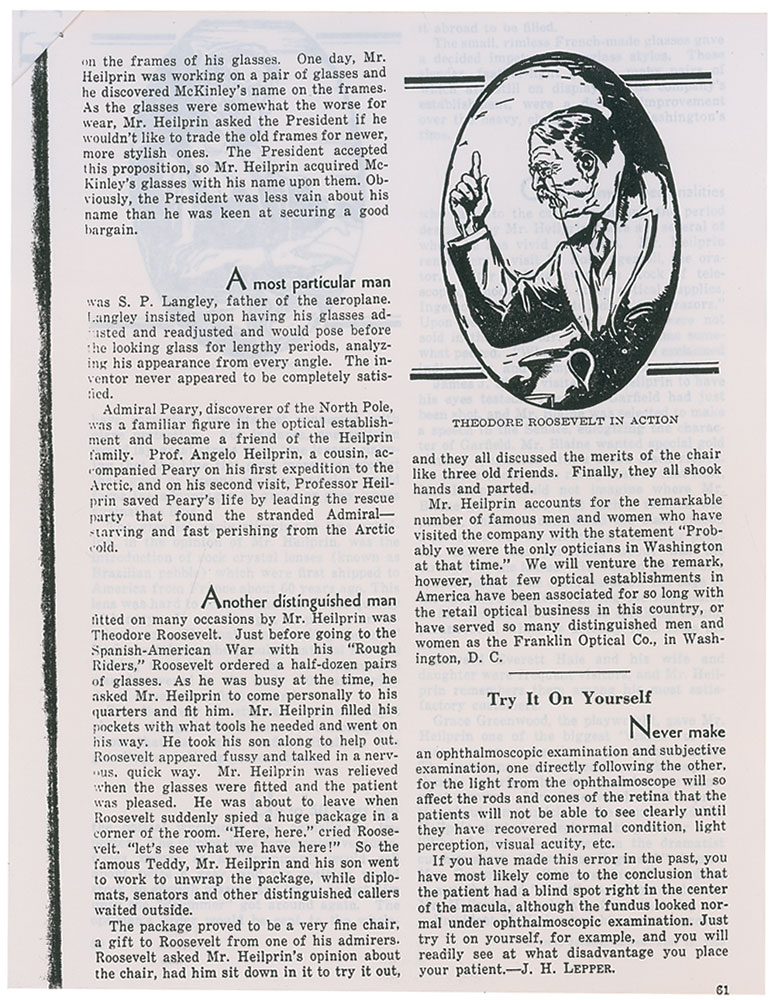 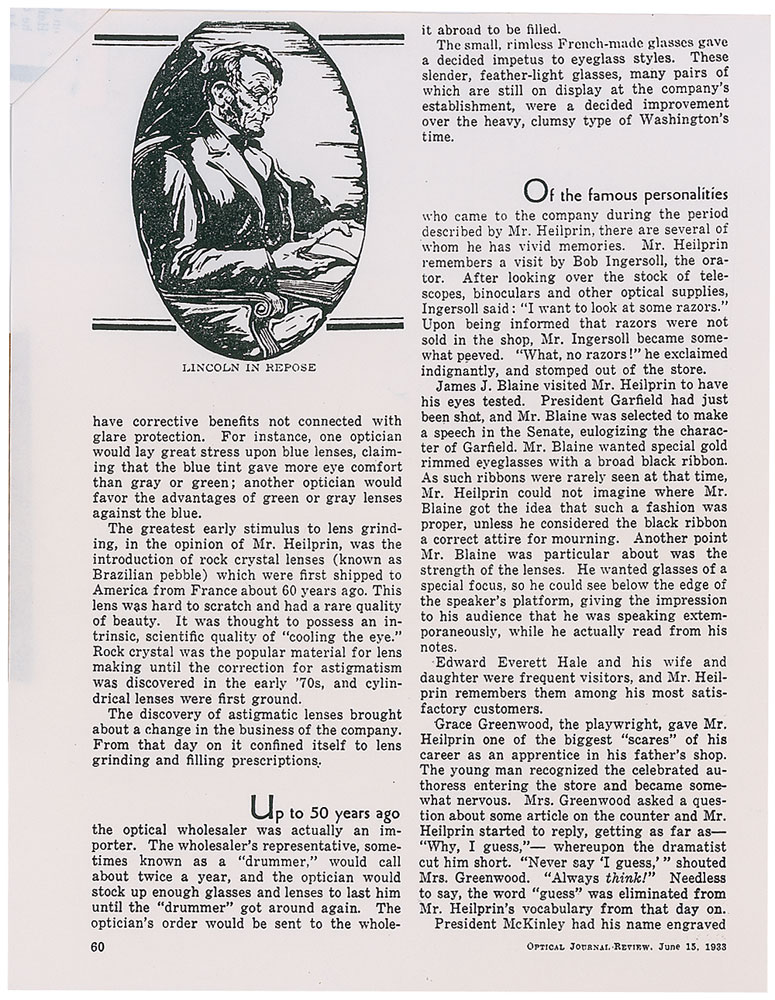 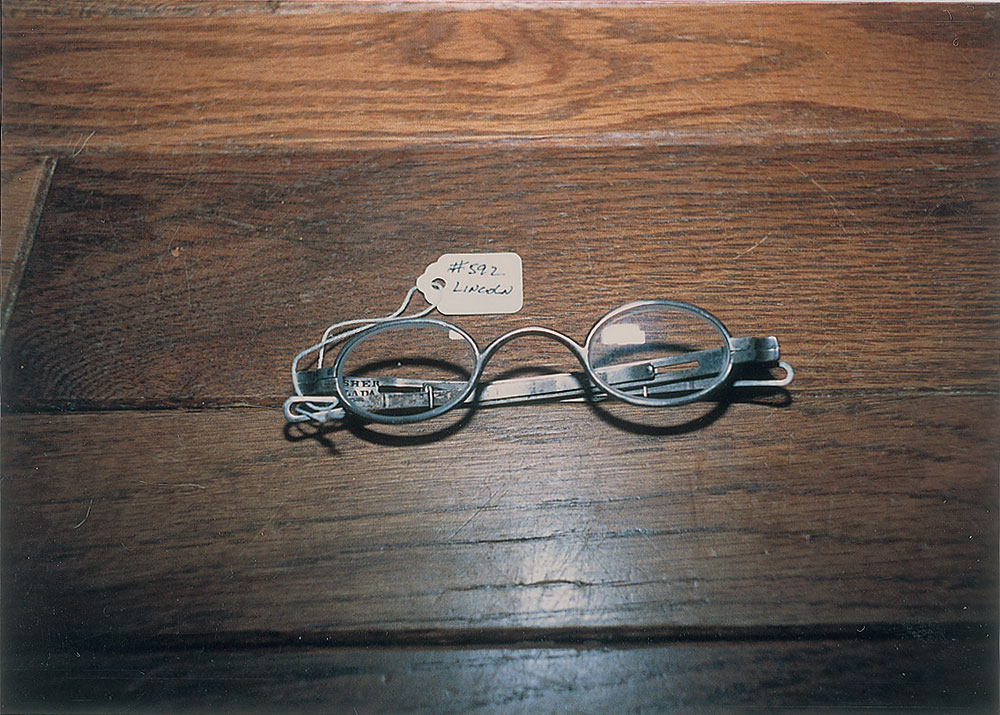 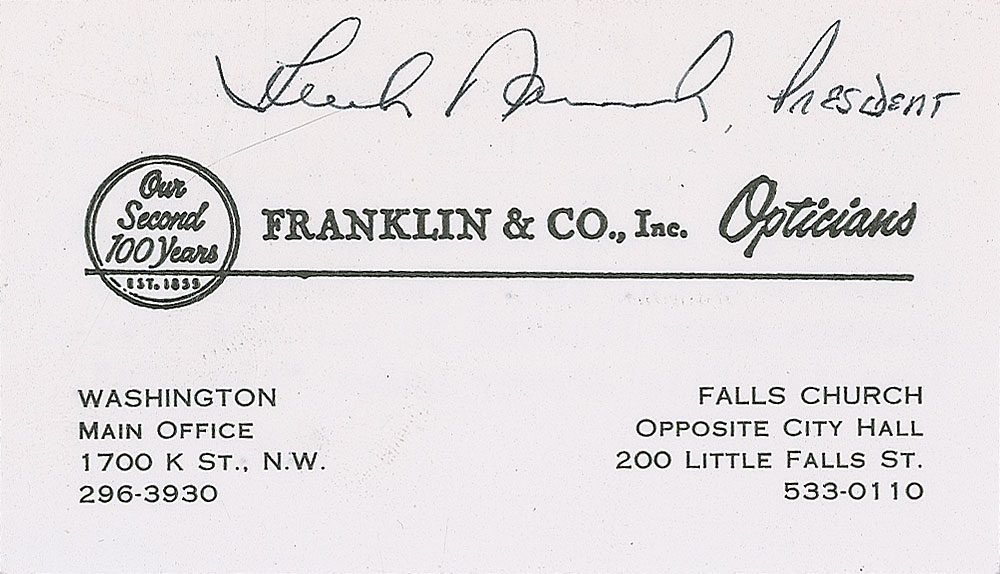 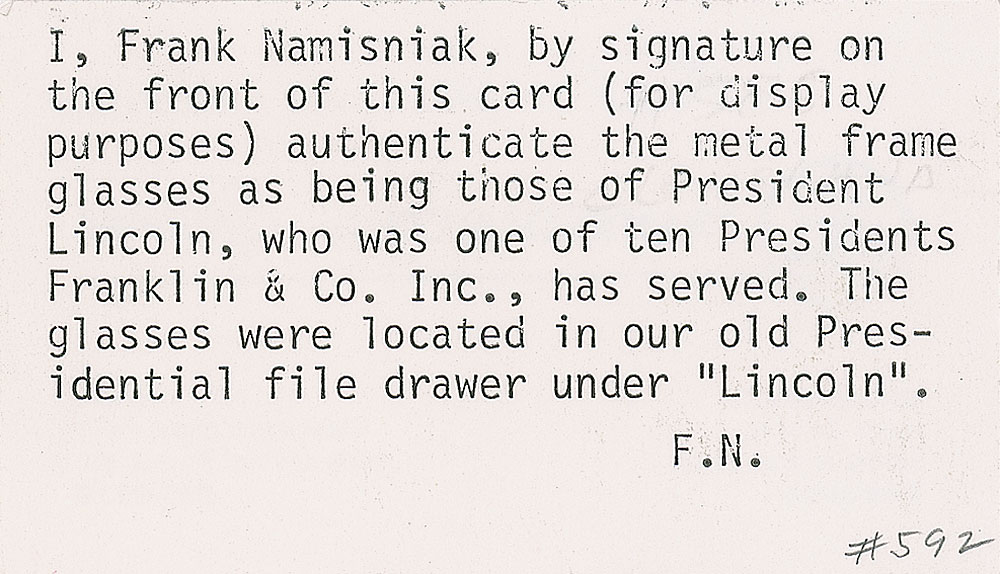 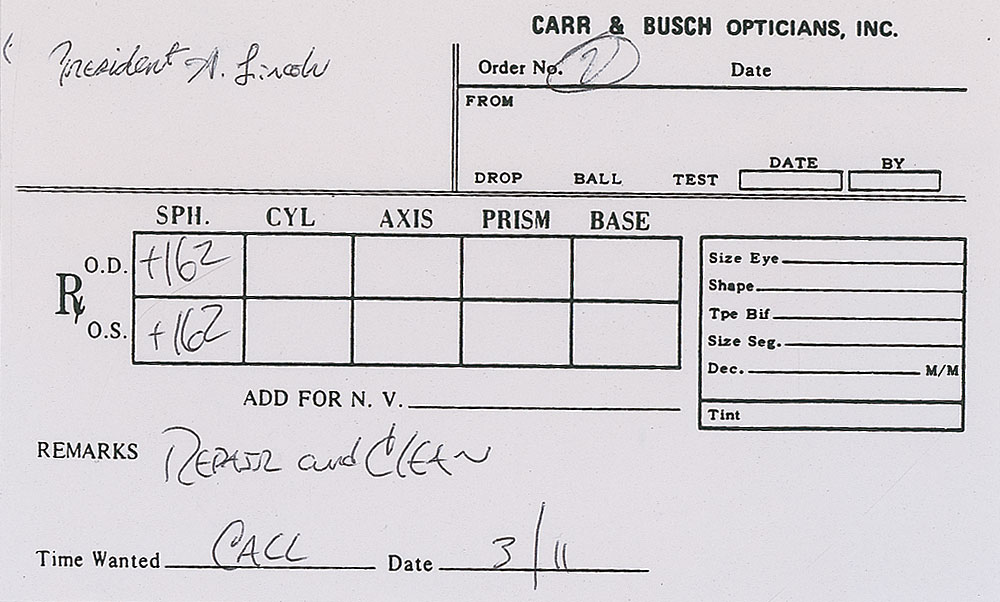 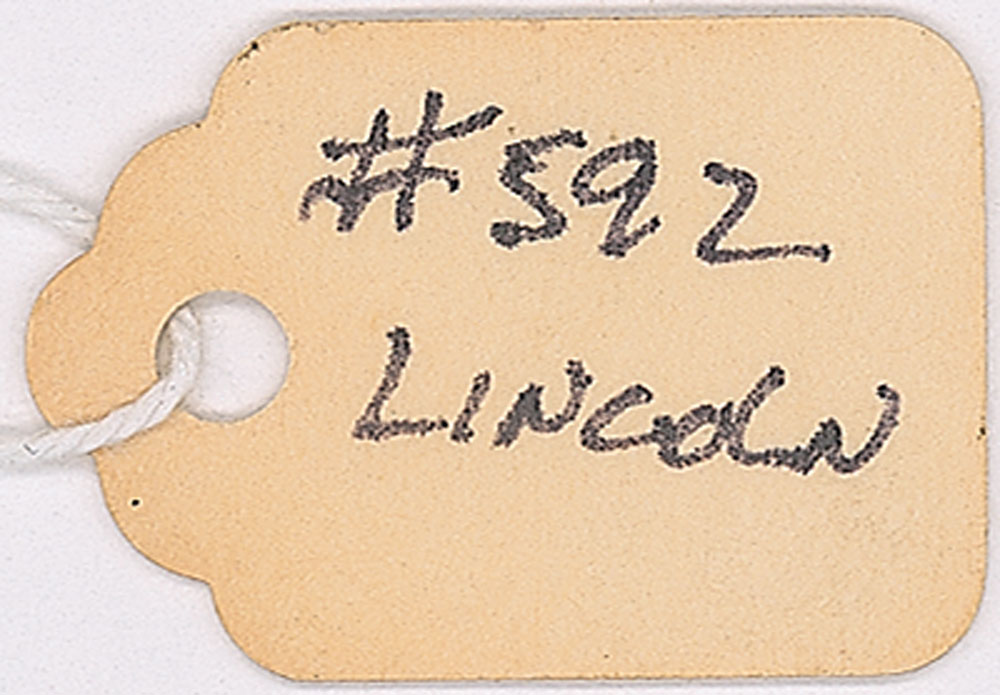 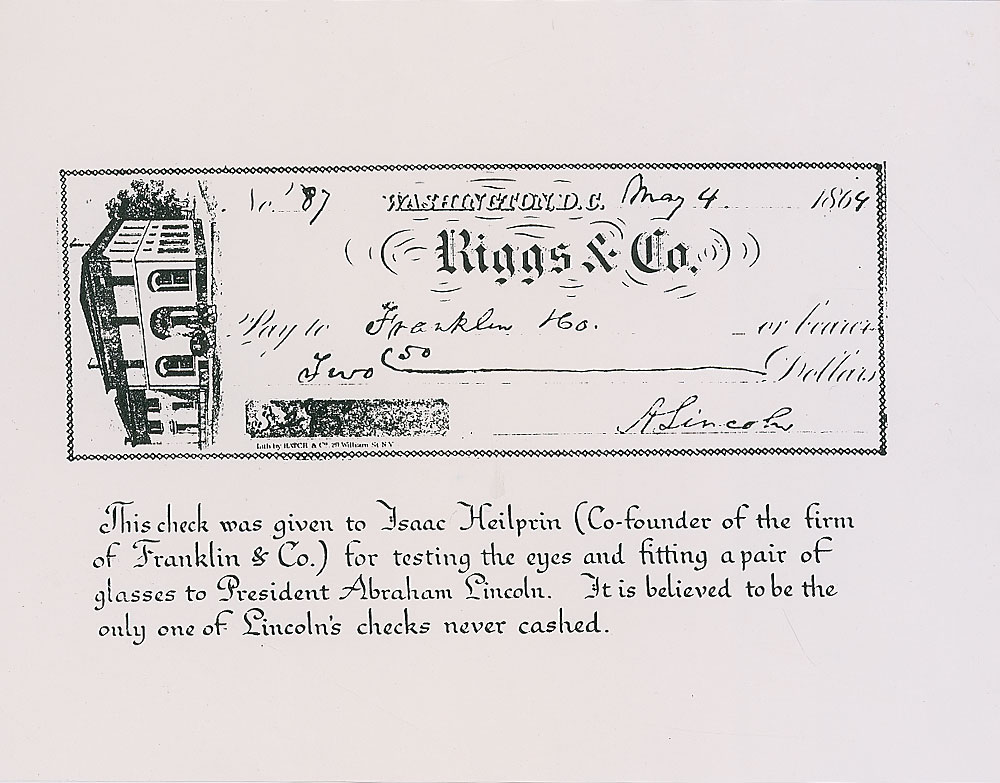 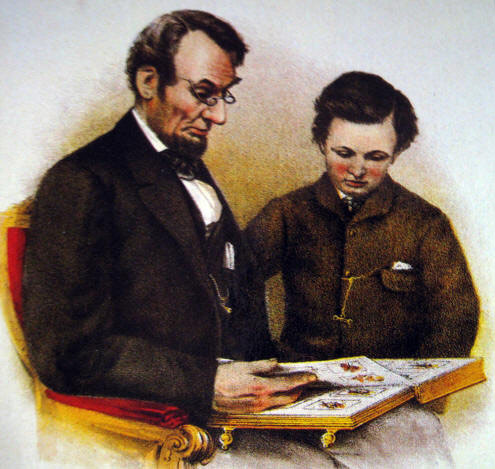 President Lincoln’s gray metal eyeglasses, with +1.62 prescription lenses, featuring straight adjustable-length temples and a fixed bridge, with small loops at the earpieces. The frames are marked inside the right temple by the maker, “Fisher, Philad’a.” Many years ago, Raleigh DeGeer Amyx was able to obtain these from Franklin & Co. Opticians of Washington, DC, which outfitted ten presidents for their eyeglasses. At one time the Franklin Company had displayed their presidential collection in downtown Washington for anyone to view, but eventually they were safely tucked away in separate sections of an old optician’s glasses drawer, befitting the back room of a working optical company. Having been acquainted with the owner of Franklin Opticians, Raleigh DeGeer Amyx was able to acquire the contents of this drawer to add to his world-class collection. Glasses are in fine condition. Includes a typed statement on a Franklin & Co. business card certifying the authenticity of the eyeglasses as being those of President Lincoln. Also accompanied by a photocopy of the check President Lincoln used to pay for an eye test and glasses fitting at Franklin & Co. Opticians in 1864. The company had initially been co-founded in Philadelphia by Isaac Heilprin during the 1850s, before relocating to Washington in 1861, establishing the storefront just four blocks from the White House—along with their fine service, it was this close proximity that made Franklin & Co. the favored optician of so many presidents. The check that President Lincoln wrote to Franklin & Co., which is dated May 4, 1864, covered the cost of a pair of steel glasses and case—an important note, as dignitaries generally favored gold frames at much greater expense. This choice is demonstrative of both his humility and personal financial situation—despite holding the nation’s highest office, Abraham Lincoln’s bank account was frequently overdrawn. Knowing this, Heilprin opted to never cash the check, keeping it as a souvenir while also alleviating this small debt—today it is believed to be the only uncashed check written by the president extant.

This rare pair of Lincoln glasses is a wonderful and most intimate historical artifact—President Lincoln required glasses to read, and can easily be envisioned wearing this stately pair. Although not generally imagined wearing glasses, one of the most famous photos of Abraham Lincoln shows the bespectacled president reading with his young son Tad. He is also known to have worn glasses during some of the most important moments of his presidency, particularly when reading speeches and addressing the public. In multiple recollections of his speech at Gettysburg, he is described as wearing glasses similar to these. In 1891, journalist John Russell Young recalled his memories of the speech, writing, ‘From an ancient case he drew a pair of steel-framed spectacles, with bows clasping upon the temples in front of the ears, and adjusted them with deliberation.’ A later book by Henry Ester Jacobs described his actions thus: ‘He drew from his pocket a metallic spectacle case and adjusted a pair of steel glasses near the tip of his nose.’ President Lincoln was also carrying two pairs of gold glasses with him when he was assassinated, one pair matching this prescription of +1.62 and the other prescribed at +2.00; he was also carrying a Franklin & Co. glasses case. These are all held today by the Library of Congress. The example of Abraham Lincoln’s eyeglasses here offered is of the utmost historical interest and appropriate for the personal or institutional collections of the highest distinction.