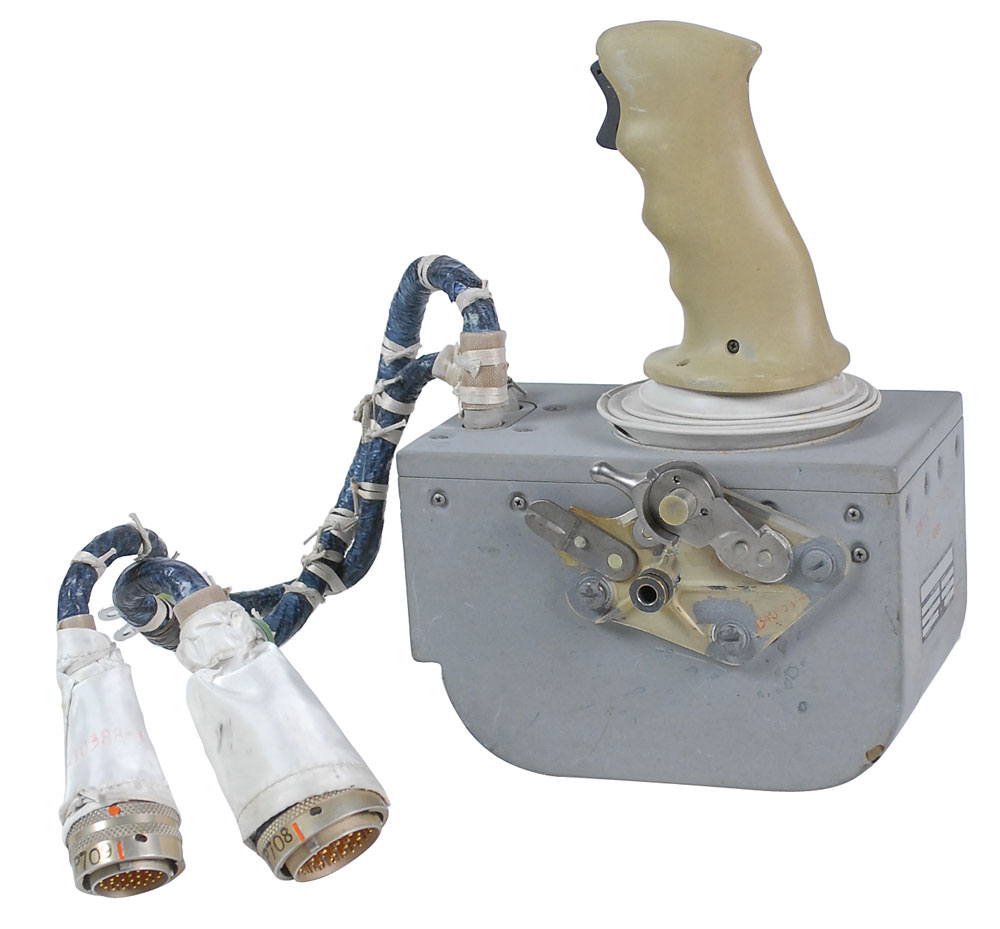 Flown lunar module rotational hand controller, used by Dave Scott and flown to the lunar surface on board Apollo 15’s Lunar Module Falcon. Controller and housing measure 4 x 10.5 x 7, with two 15″ umbilicals protruding from the top of the housing, both with Beta cloth covered plugs at the end. Housing retains its original Honeywell label which reads: “Attitude Controller Assembly; MFG. Serial No. 041P; Mfg Date 3 Mar. 1969.” Spring-loaded hand controller remains quite tight and returns to neutral, and was used to control pitch, roll, and yaw while maneuvering to and from the lunar surface. The communications trigger switch is also present, and a screw on the front of the housing retains one of its wax tamper seals. Located on the left side of the cabin interior, this controller was used by Commander Dave Scott to land the LM to the Hadley Rille landing site, as well as piloting the ascent stage to rendezvous with Command Module for their trip home. In fine condition, with expected light wear.

Accompanied by a very detailed 2014 two-page letter of authenticity and explanation from Dave Scott which reads, in part: “I hereby certify that the Rotational Hand Controller (RHC) included with this letter was used to maneuver the Lunar Module ‘Falcon’ during the Apollo 15 descent and landing on the Moon; and after 3 days on the surface of the Moon, this RHC was used during lunar launch, ascent and rendezvous with the Command and Service Module, ‘Endeavor,’ in lunar orbit…This LPD function was especially significant during Apollo 15 whereby during the initial descent from lunar orbit, the Mission Control Center (MCC) informed the crew that the trajectory would take the LM 3,000 feet south of the planned touchdown point. The lunar surface became visible during descent at about 7,000 feet altitude (LM ‘pitchover’) and based on the MCC input that we would land 3,000 feet south, I immediately began to move the target point north using the RHC to redesignate the LGC touchdown point…In summary, this remarkable device (RHC, ACA), coupled with appropriate mode switching, provided the Commander (and LMP) with 11 separate functions during four major phases of a lunar landing mission:

—Landing Point Designation, fore, aft, and laterally during approach and landing; and

This Apollo 15 Lunar Module Rotational Hand Controller (RHC, aka ACA) has been in my personal collection since returning to Earth.” RR Auction COA.