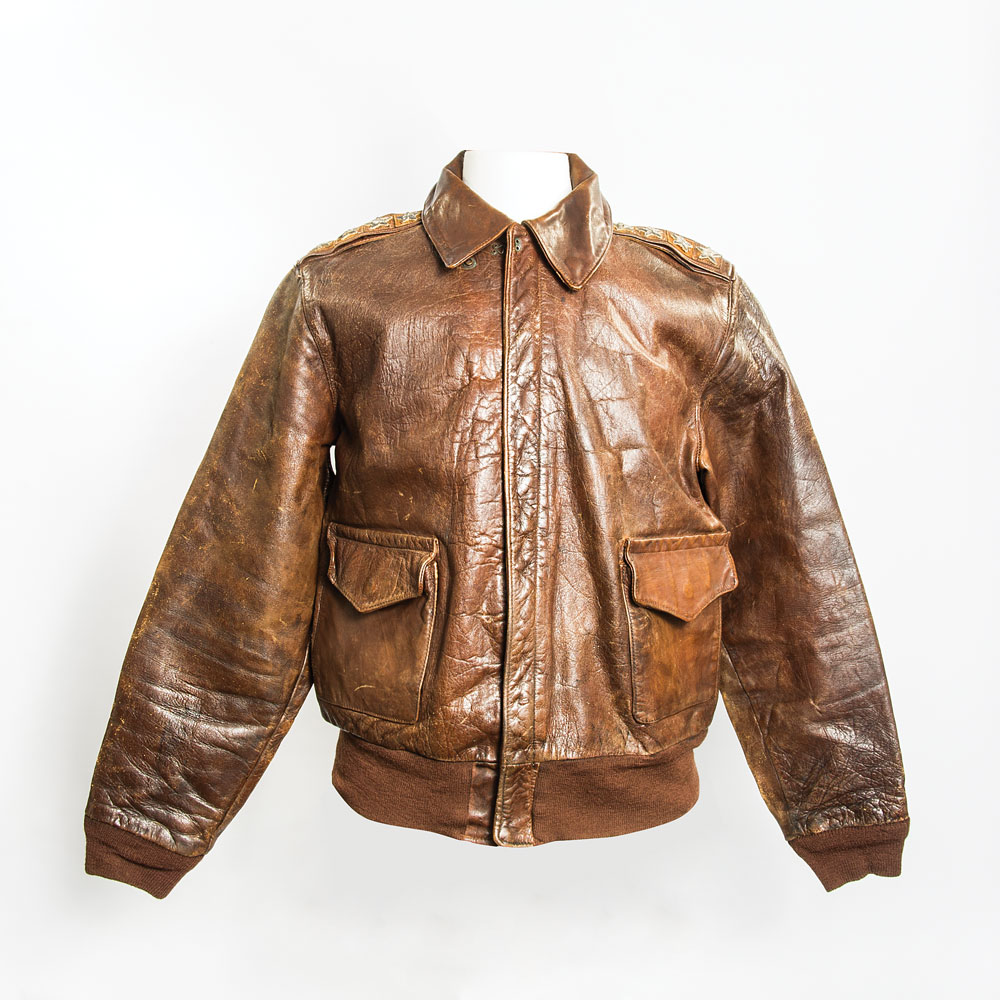 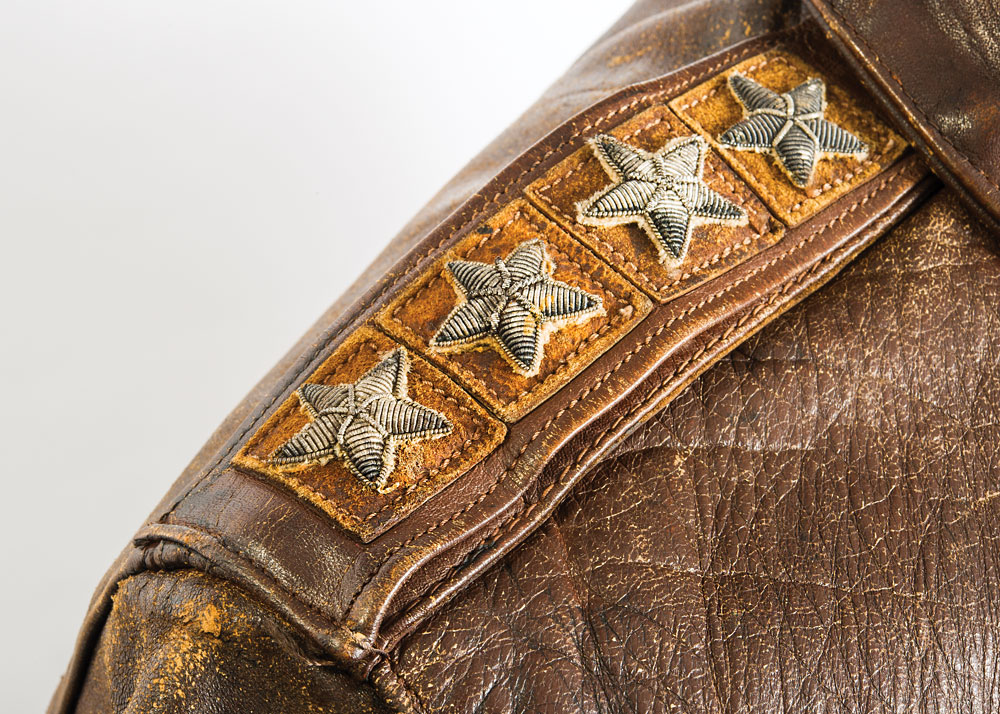 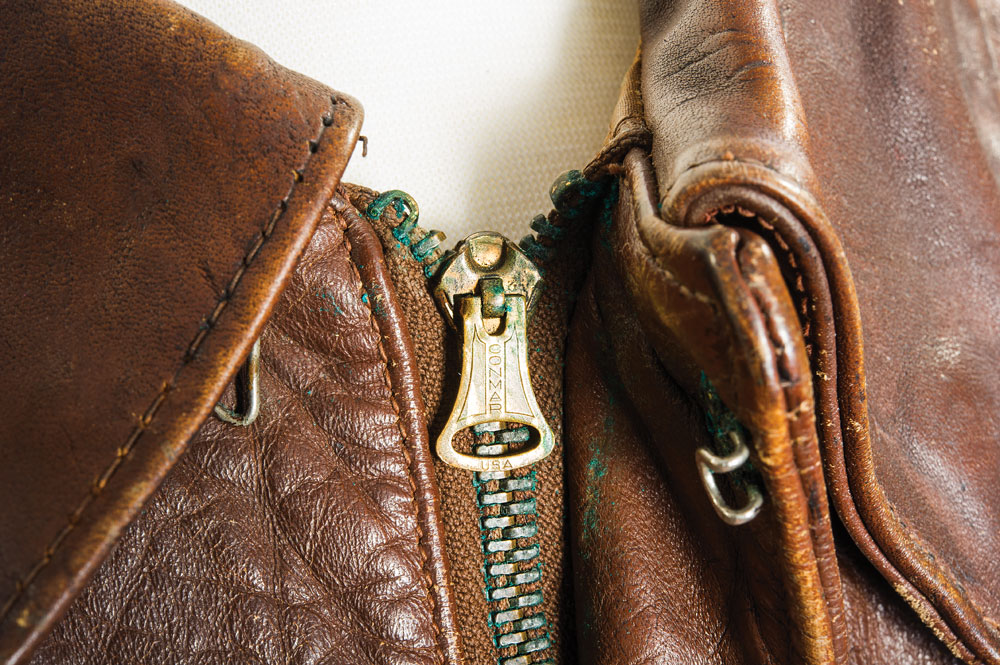 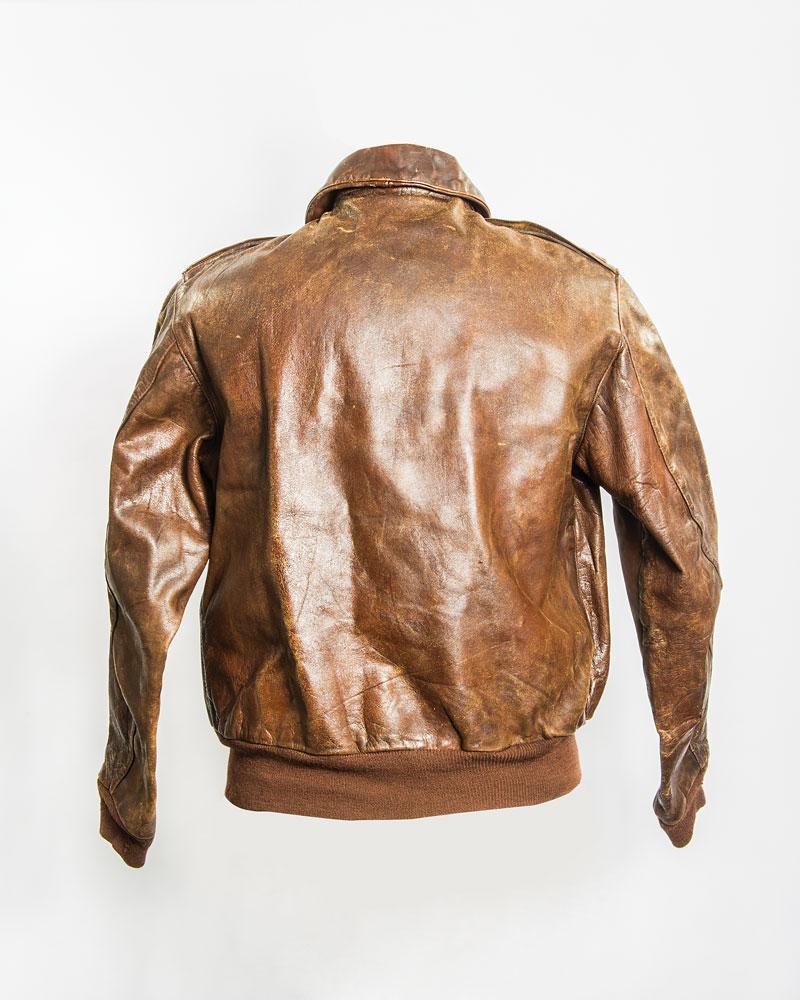 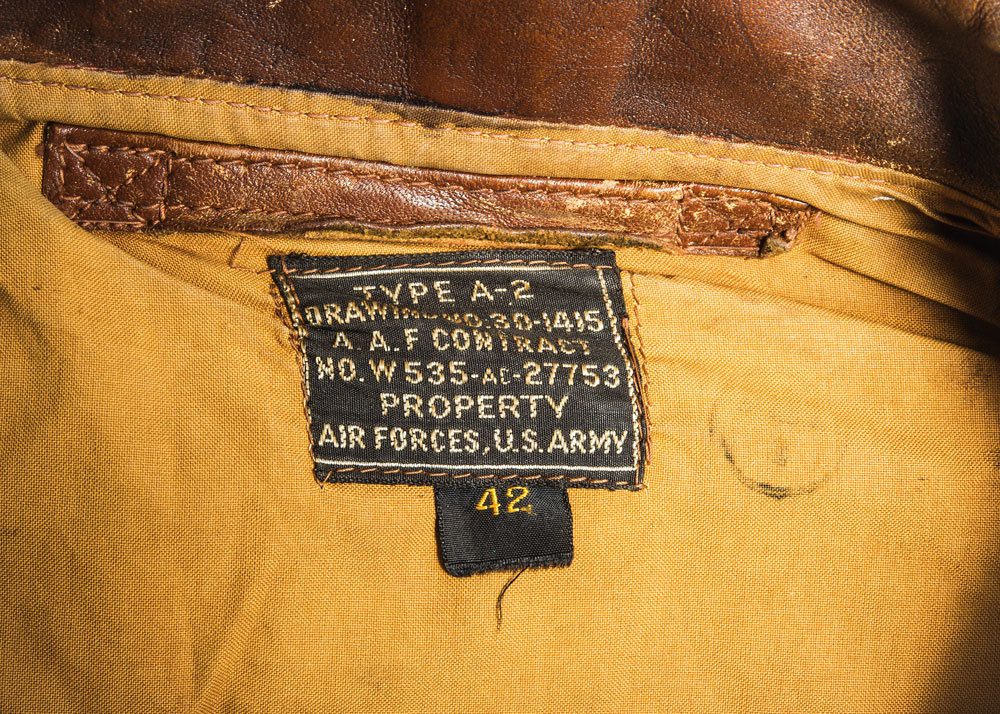 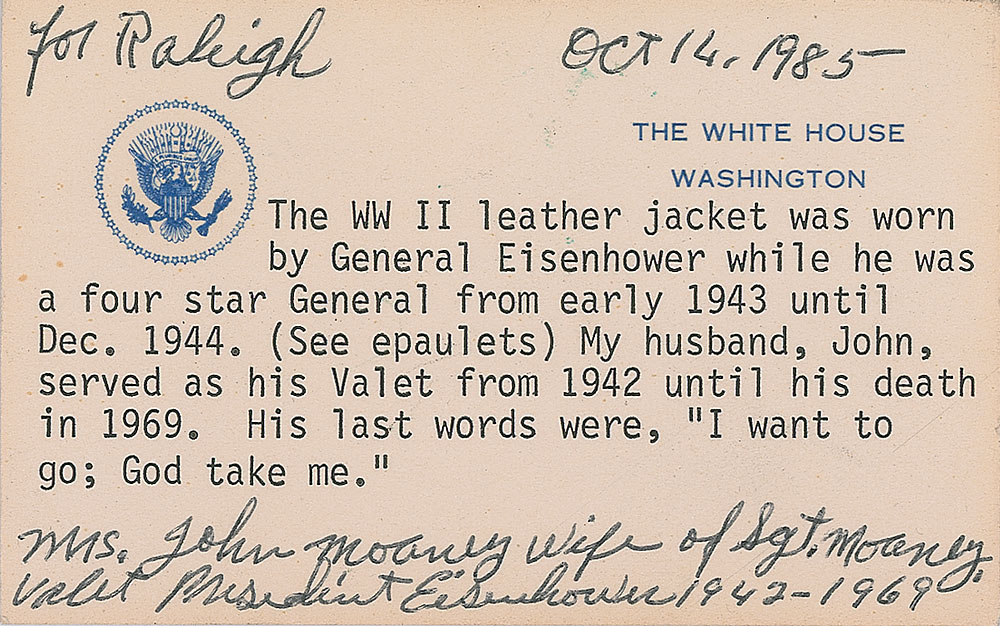 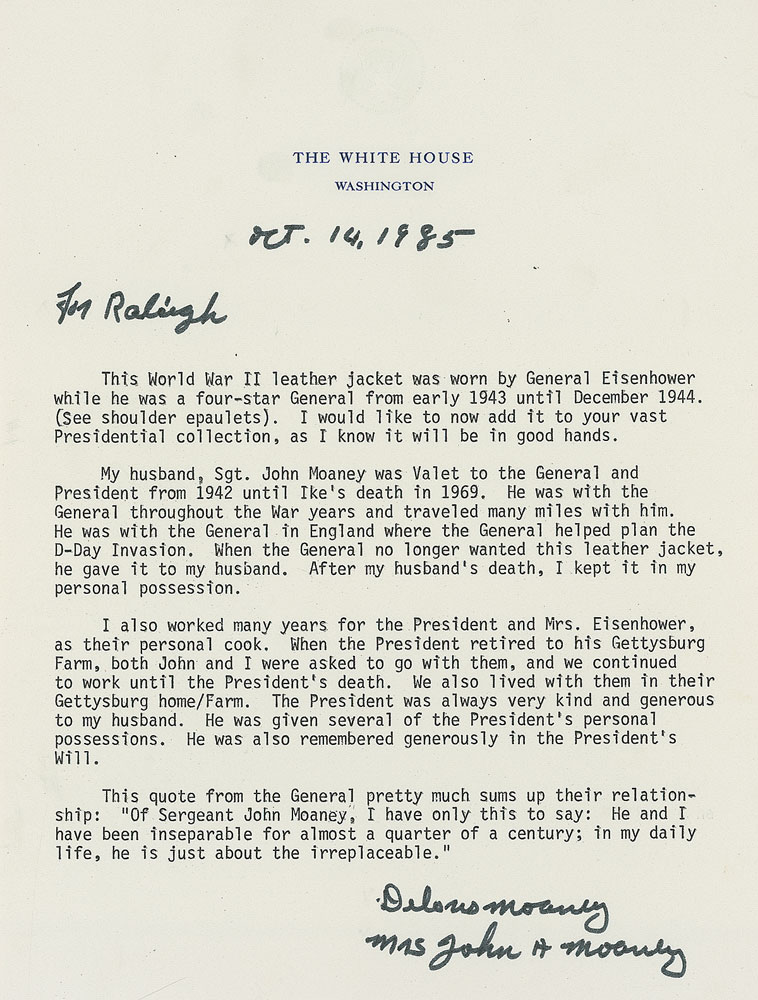 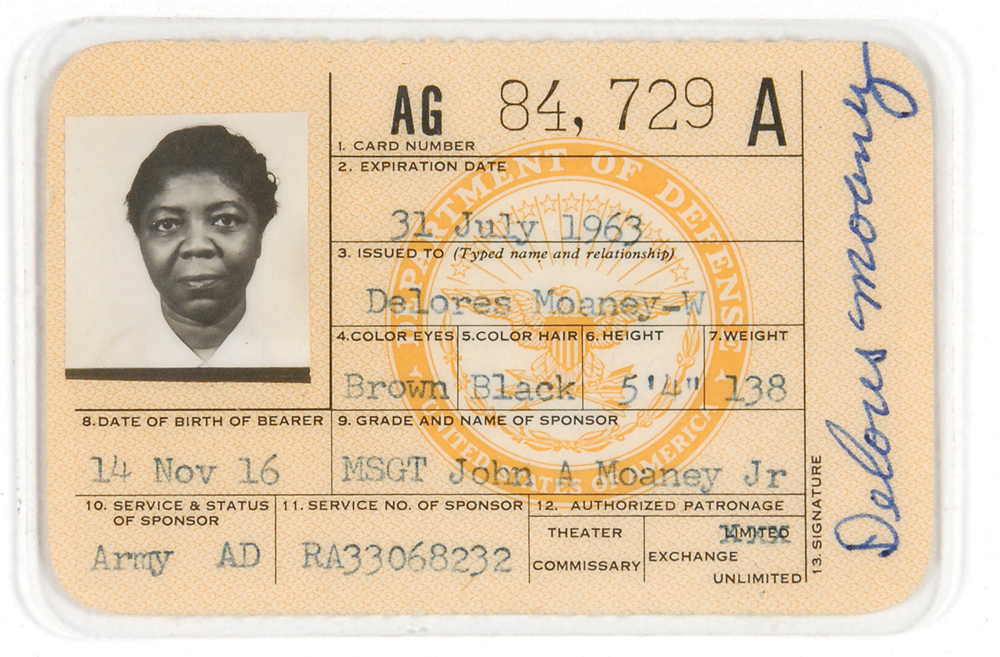 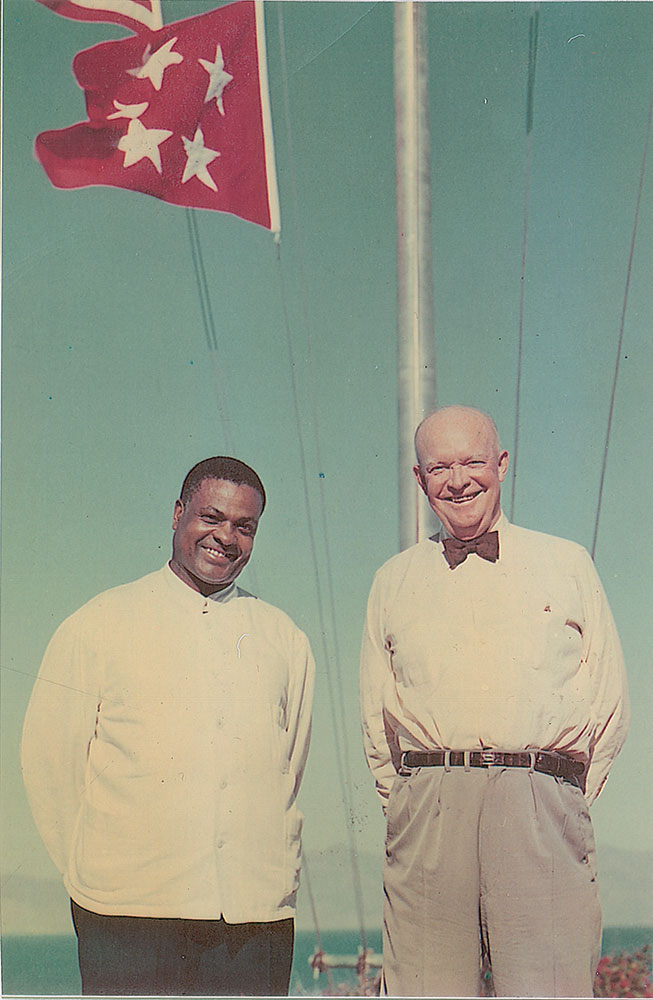 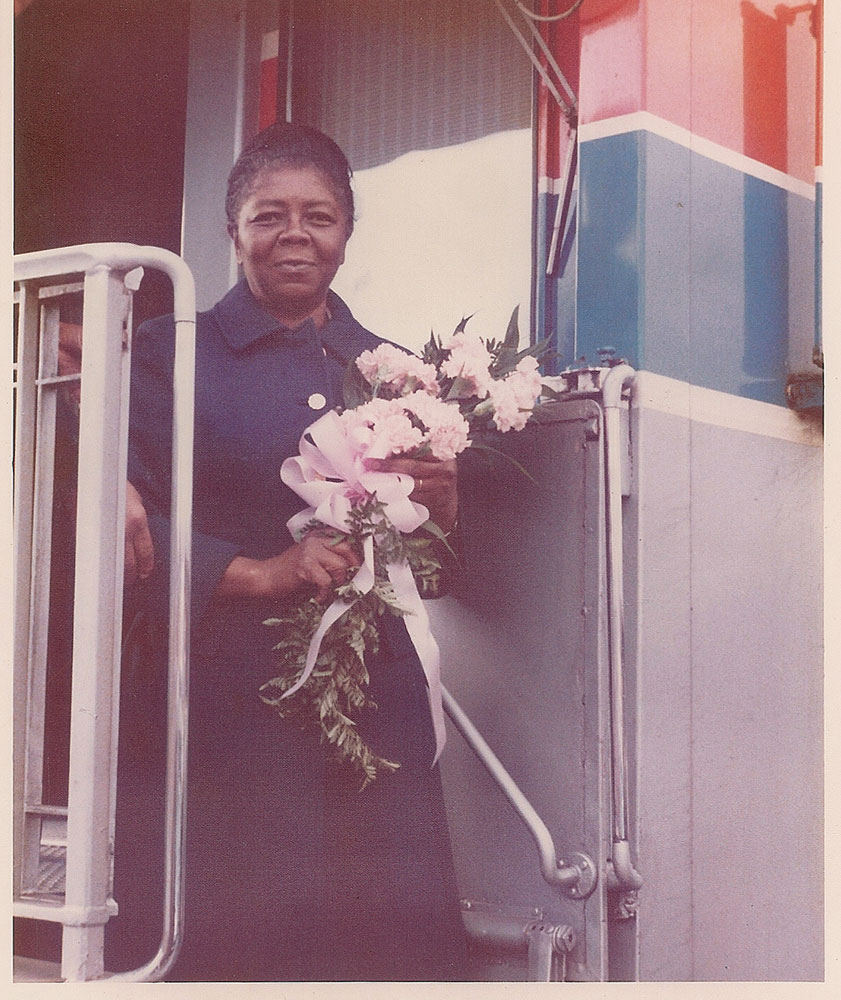 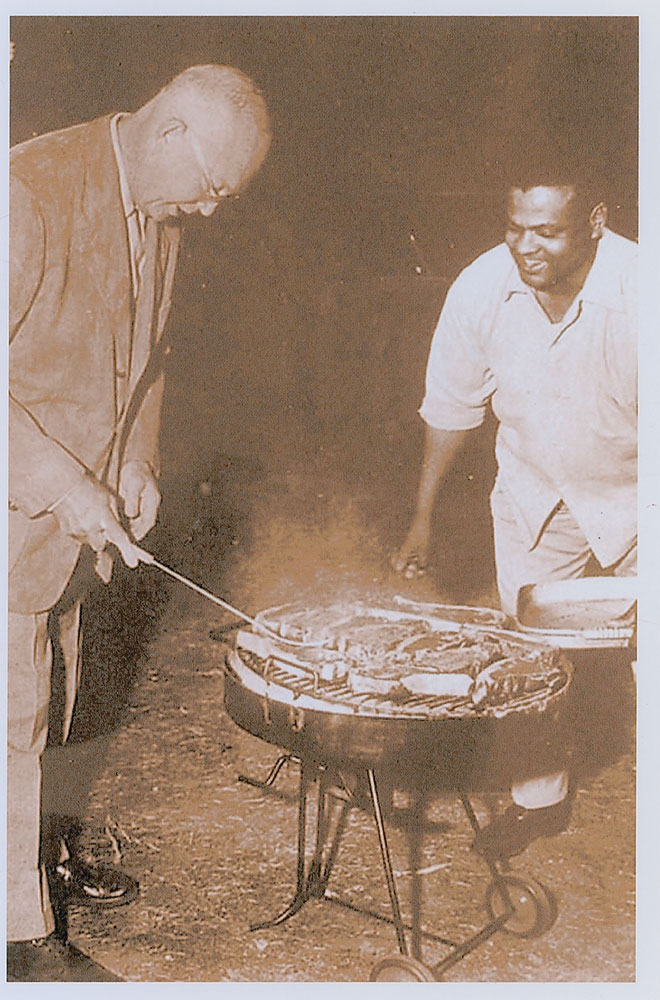 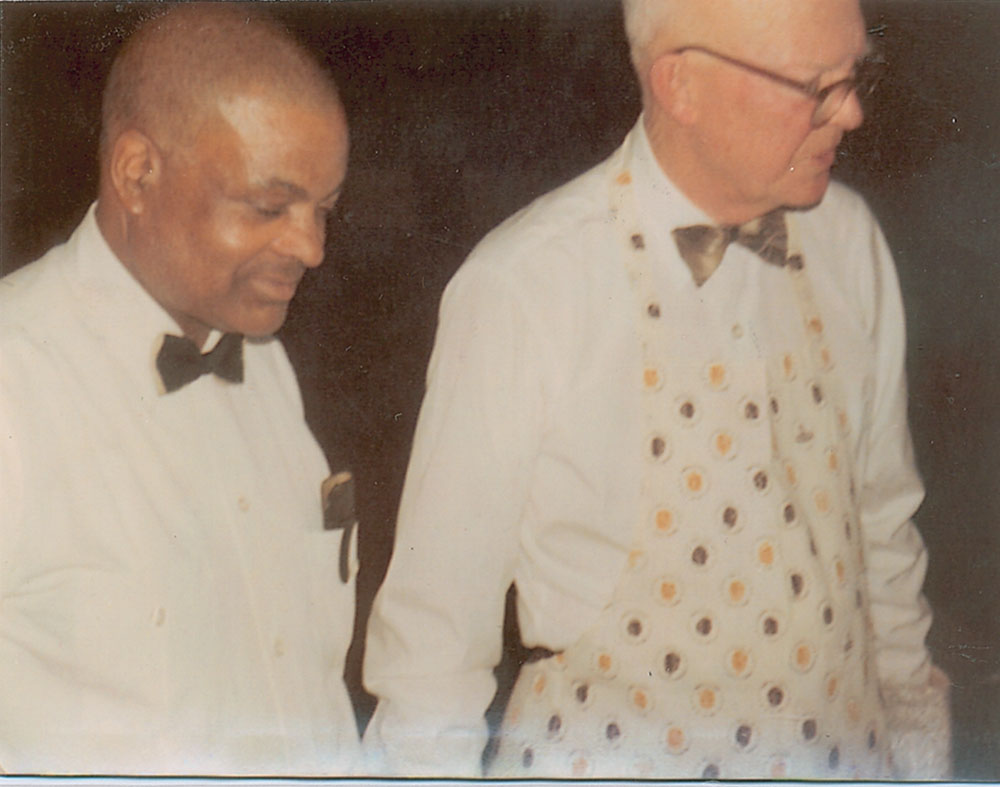 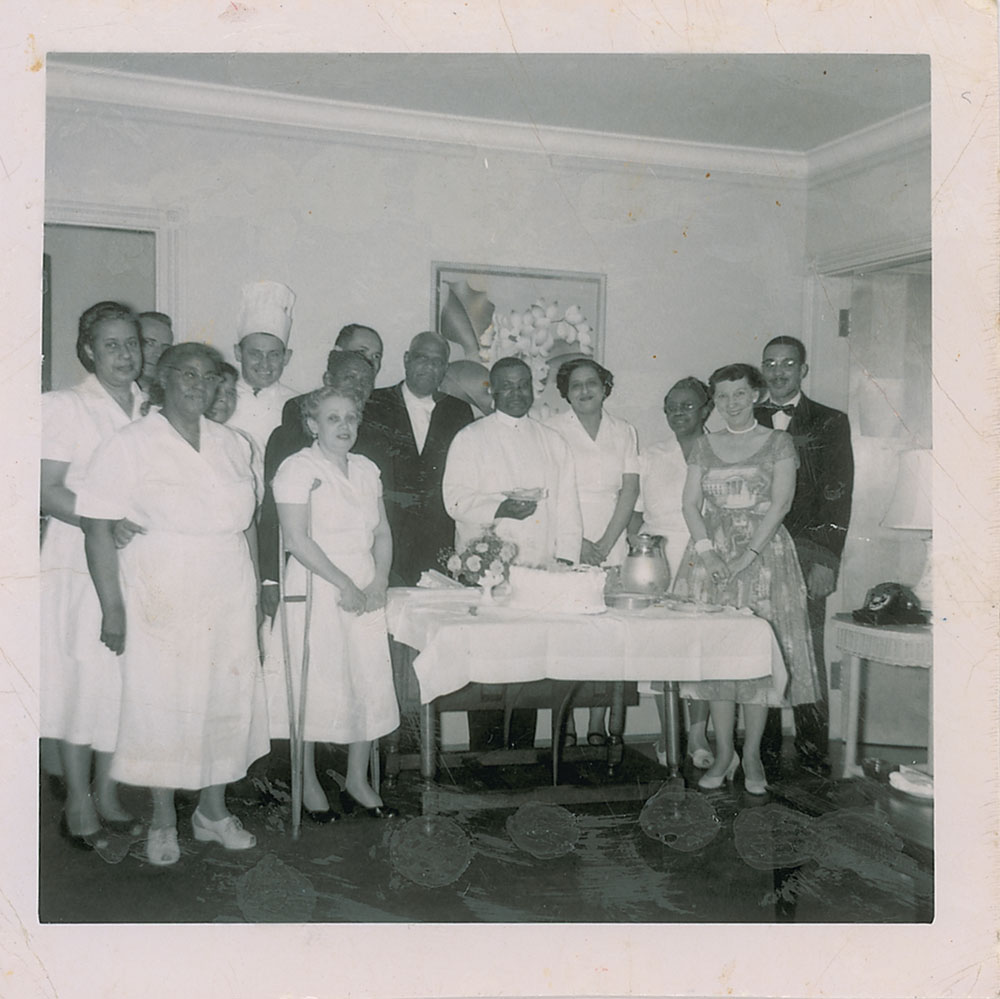 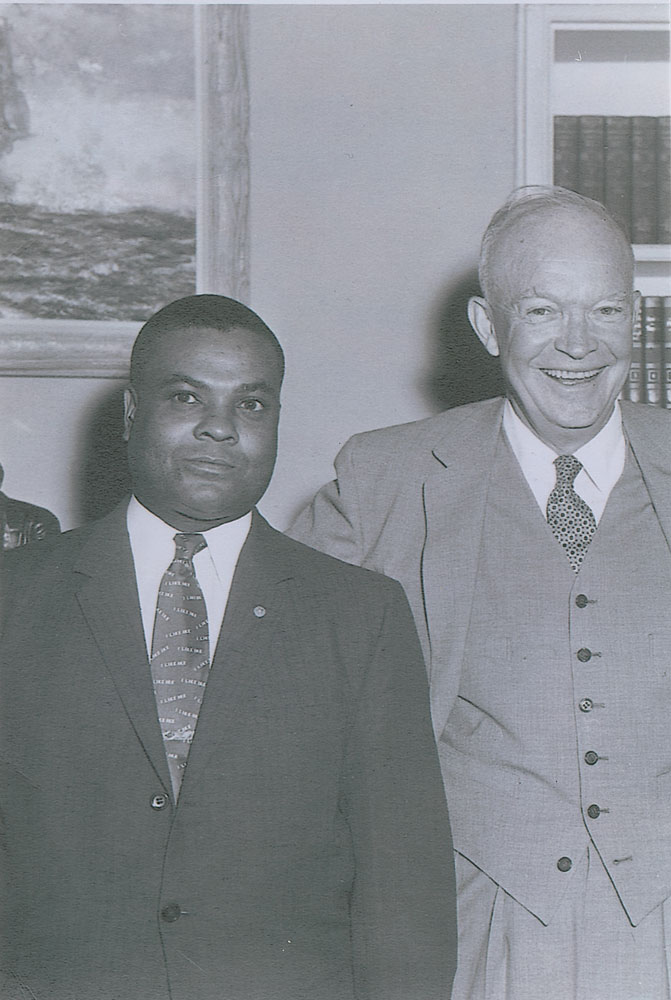 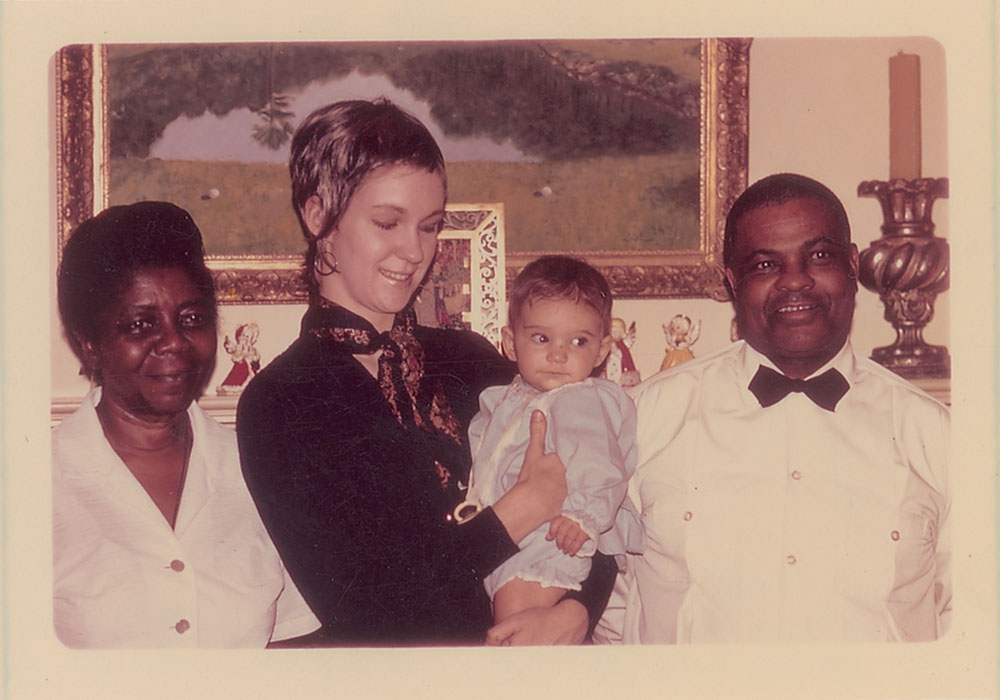 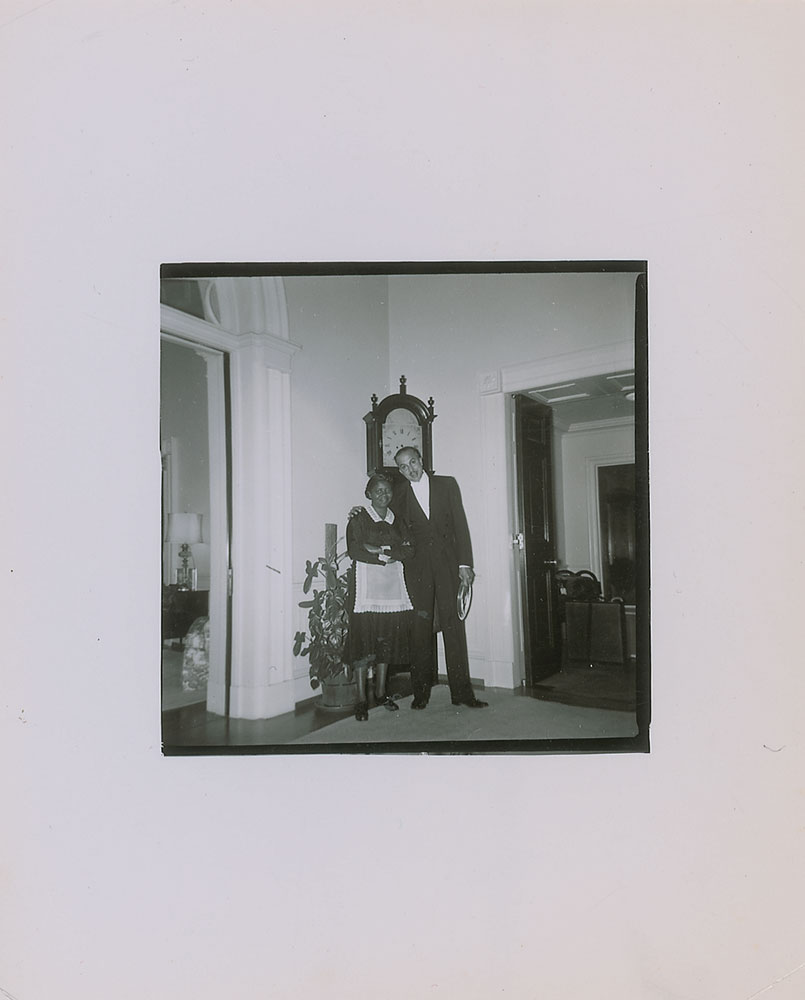 President Eisenhower's personally-owned and -worn dark brown Type A-2 leather flight jacket from World War II, size 42, featuring four-star epaulettes on the shoulders. The tag inside the neck area does not indicate a manufacturer, reading: "Type A-2 / Drawing No. 30-1415 / A. A. F. Contract / No. W535-AC-27753 / Property / Air Forces, U. S. Army." An inspection stamp to the right of the tags is faded but visible. All markings are of the appropriate manufacture dates or delivery timeframe. The jacket has a brass Conmar zipper, brown stitching for the jacket, and olive drab stitching for the four-star epaulette patches. The pockets feature rounded lower corners and an angular flap.

Includes a detailed letter of significant provenance on White House letterhead signed by Delores Moaney, the Eisenhower family's cook and the widow of Sgt. John Moaney. Her husband had served as Dwight D. Eisenhower’s close personal valet from 1942 until the president's death in 1969. In part: "This World War II leather jacket was worn by General Eisenhower while he was a four-star General from early 1943 until December 1944…My husband, Sgt. John Moaney was Valet to the General and President from 1942 until Ike's death in 1969. He was with the General throughout the War years and traveled many miles with him…When the General no longer wanted this leather jacket, he gave it to my husband. After my husband's death, I kept it in my personal possession." Also includes additional pieces of important provenance consisting of a typed White House card signed by Mrs. Moaney, briefly outlining the same details, as well as four modern prints of photos showing John Moaney with Eisenhower, and nearly 100 very interesting and unique original black and white candid photos, mainly of workers at the White House, with several picturing Ike and Mamie Eisenhower, and a few picturing Sgt. John Moaney.

The epaulettes decisively date the jacket to between February 11, 1943, and December 20, 1944, the period during which Eisenhower was considered a four-star general; it is most likely that this jacket was issued just a bit earlier, with new star patches sewn to the epaulettes as he advanced in rank. Most importantly, it was during this time that Eisenhower planned Operation Overlord, leading the Allied forces in the invasion of Normandy on D-Day—June 6, 1944. As an iconic World War II leather jacket owned and worn by General Eisenhower during the most crucial period of the war, still in excellent condition for its age, this is an artifact of ultimate historical interest and significance. A quintessential military and presidential relic to say the least.