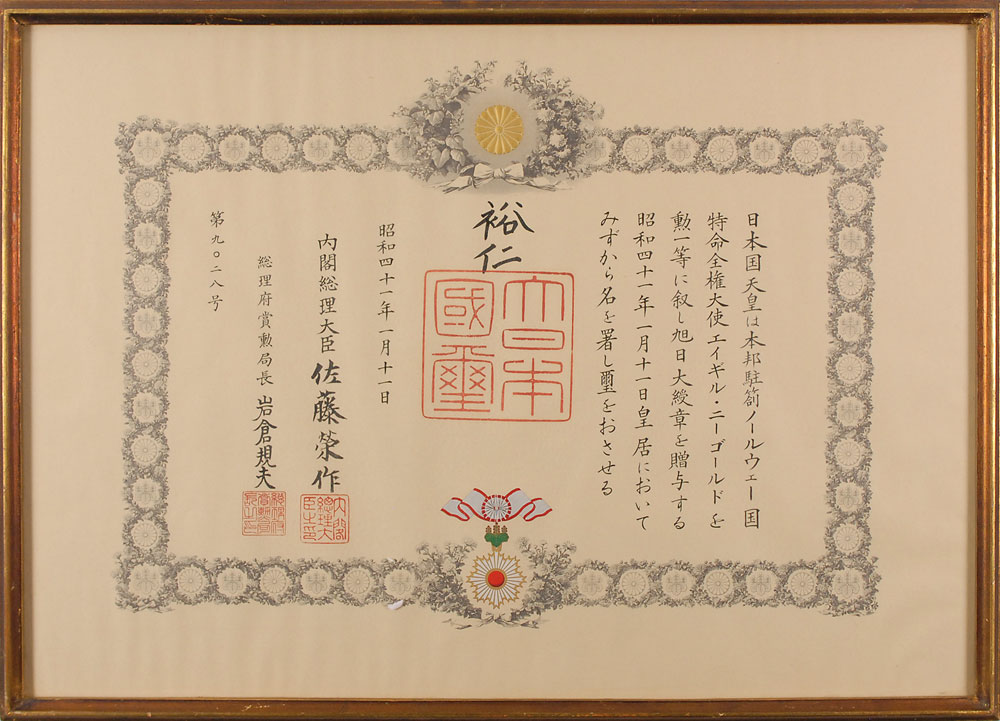 Extremely rare DS in Japanese, signed by Hirohito as emperor of Japan and Eisaku Sato as prime minister, one page, 22.5 x 16, January 11, 1966. Document bestowing the First Class Order of the Rising Sun upon Norwegian diplomat Eigil Nygaard. In full (translated): "We, the Emperor of Japan, do hereby confer upon Mr. Eigil Nygaard, Ambassador Extraordinary and Plenipotentiary of Norway in Japan, the First Class of the Order of the Rising Sun. in witness whereof, We have caused the Seal of State affixed to these presents, which We have signed with Our own hand at Imperial Palace. This Day, the Eleventh of the First Month of the Forty-first Year of Showa." Prominently signed in the center by Hirohito above a large red stamped seal of state, and countersigned by Eisaku Sato and Norio Iwakura above their seals of office. Framed to an overall size of 23.75 x 17, with an official English translation affixed to reverse.

Also present are the medal, breast star badge, and sash for this award, housed in the original black lacquer box on a lift-out velvet tray. Medal measures approximately 3.5″ in diameter and features gold-plated inner rays, silver-plated outer rays, and a dark red center, with a pin and hook to the reverse. This was to be worn on the red and white sash, measuring 65 x 4, which features a prominent rosette. The breast star badge features a dark red center with white and gold rays, approximately 3″ in diameter, and is attached to an ornate green, red, and gold latch pin and pivot. Also includes a small lapel pin that matches the sash.

Included as well is a vintage matte-finish 14 x 10.75 coronation portrait featuring separate images of Emperor Hirohito and Empress Nagako. Presented in its original black lacquer frame to an overall size of 16.5 x 12.75, with decorative backing present but detached.

All items are in overall fine to very fine condition, with some subtle dampstaining to the coronation portrait. Accompanied by a TLS signed "K. Yamayoshi" confirming the English translation.

Eigil Nygaard, the recipient of the award, was Norway’s ambassador to Japan from October 3, 1958, to November 19, 1966. Established in 1875 by Emperor Meiji, The Order of the Rising Sun was the first national decoration awarded by the Japanese government, given to recognize distinguished achievements in international relations, promotion of Japanese culture, development in welfare, or preservation of the environment. Hirohito documents are extraordinarily rare, and this example is also signed by Sato, who was later awarded the Nobel Peace Prize for signing the nuclear arms Non-Proliferation Treaty. With the document absolutely remarkable in itself, the inclusion of the award medals and sash—all beautifully designed and in stunning condition—elevates this collection to one worthy of a museum. RR Auction COA.