"The Wright Brothers had heard of Ader only as a man, who was rumored to have attempted to solve the problem of human flight," writes Wilbur, "and had met with disastrous failure" 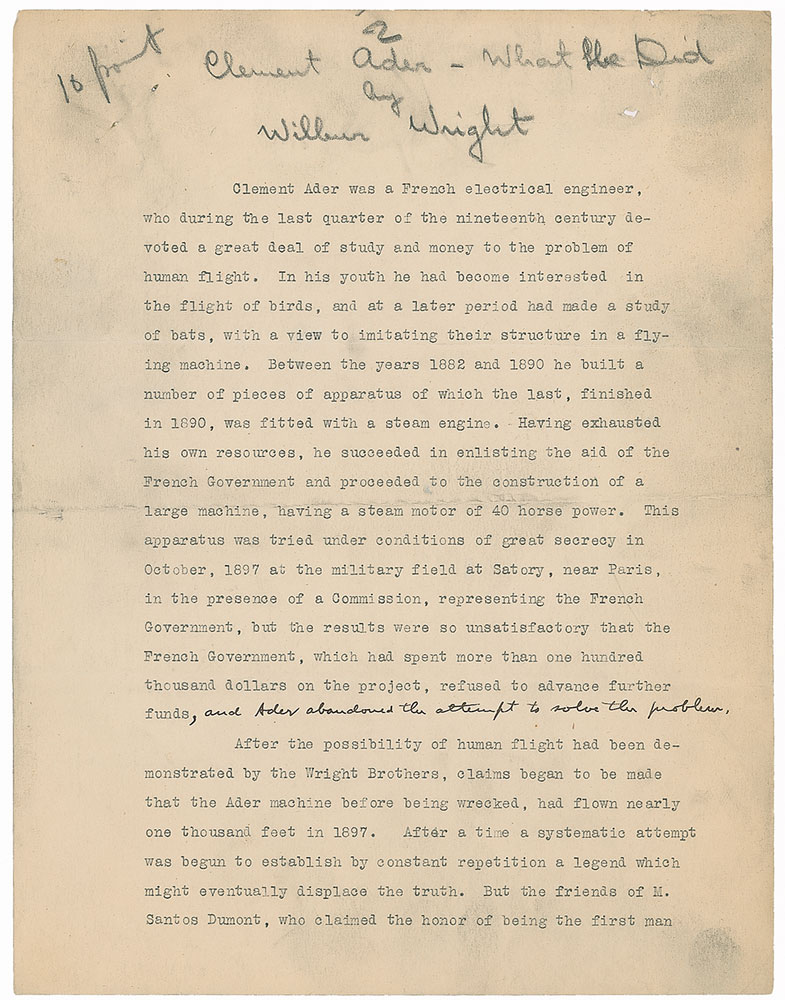 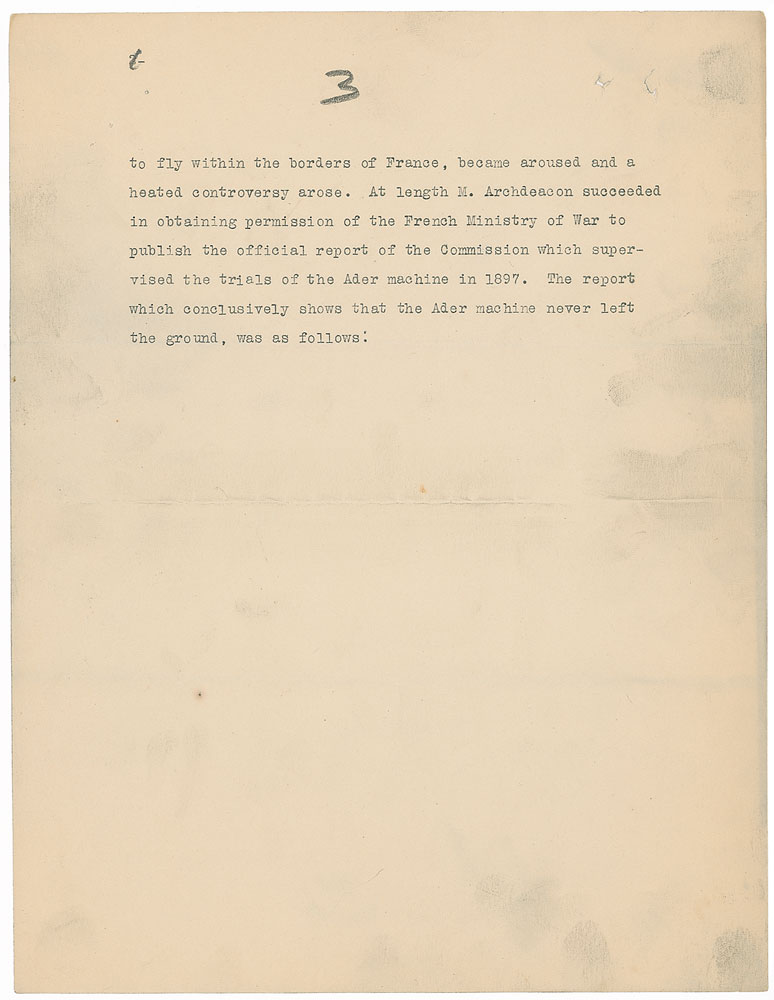 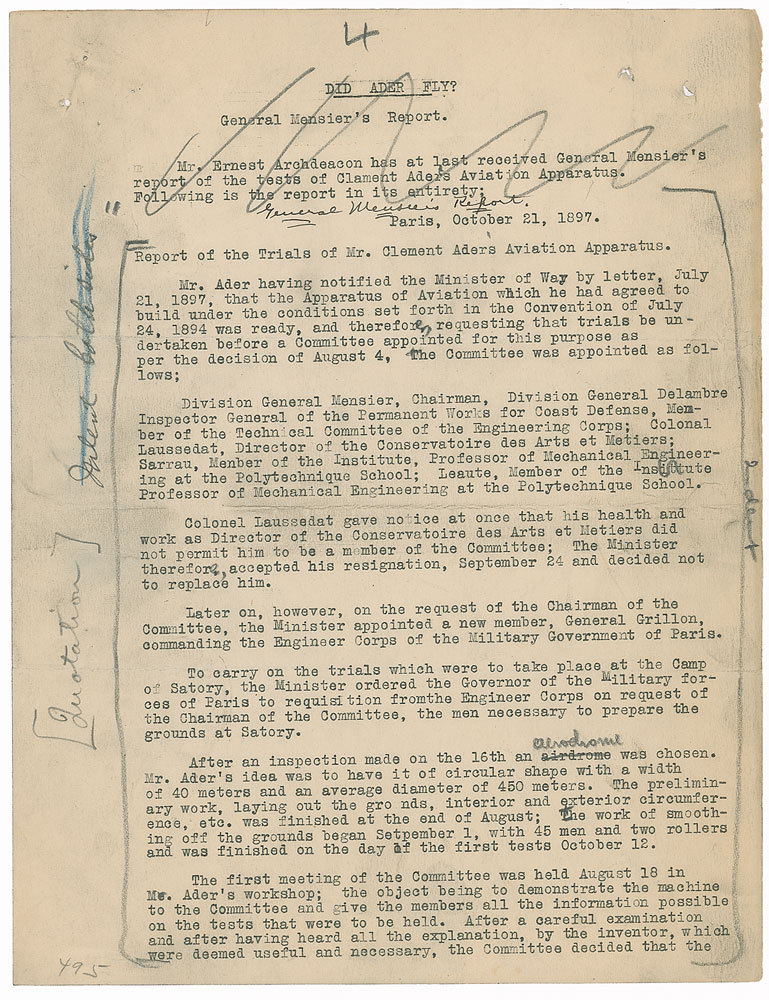 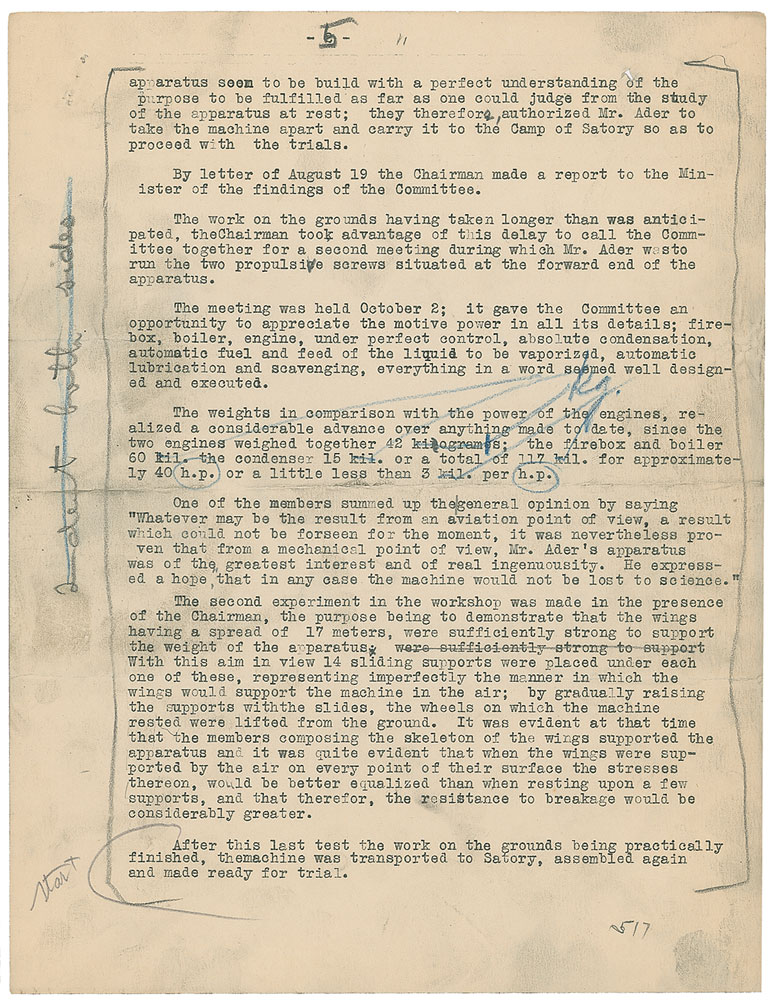 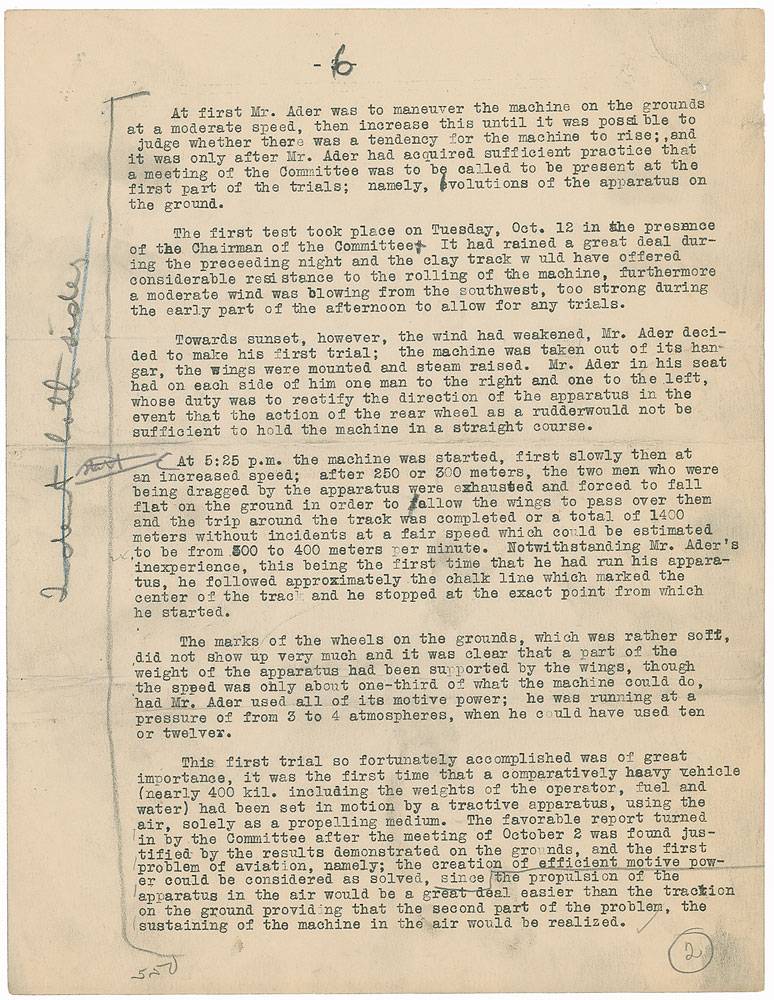 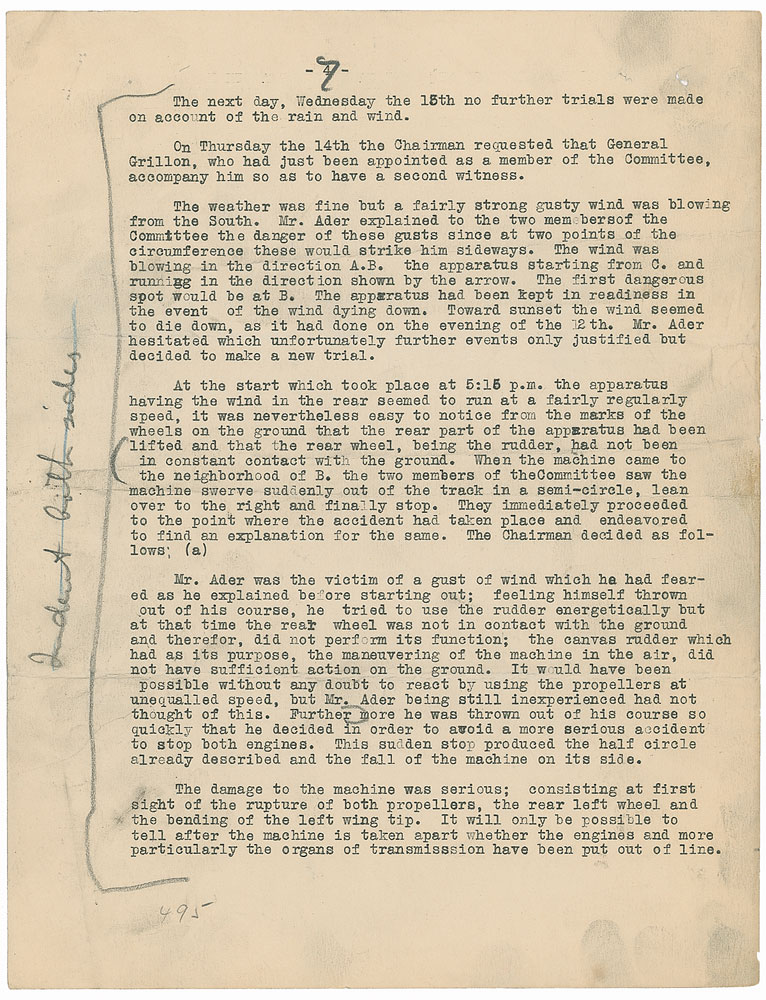 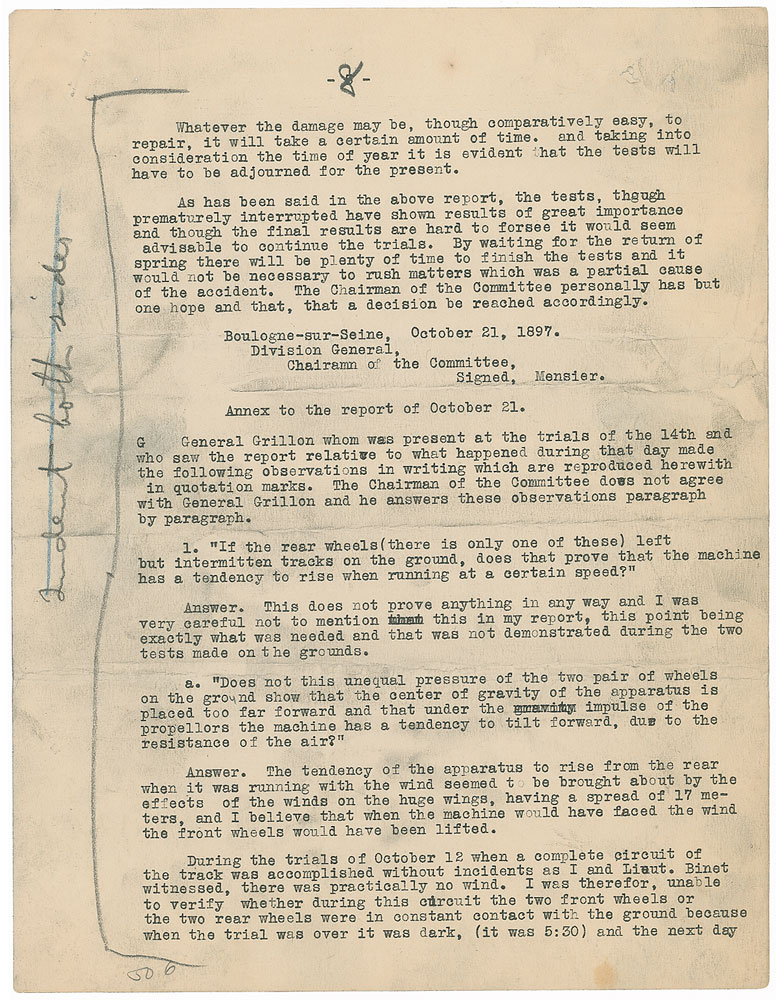 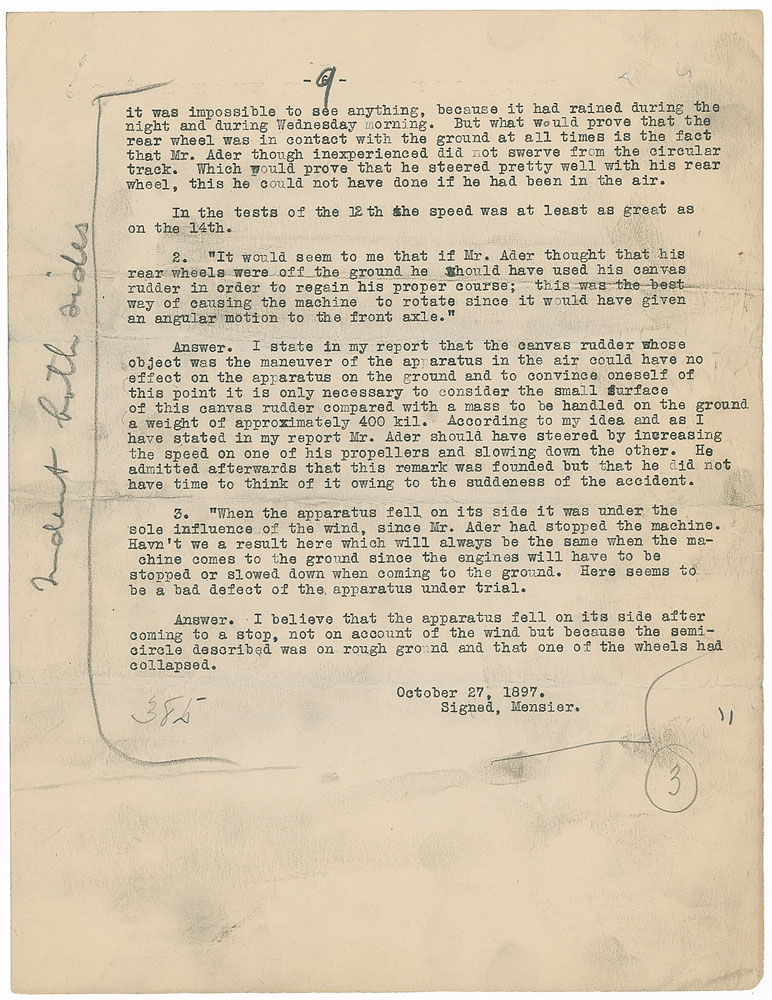 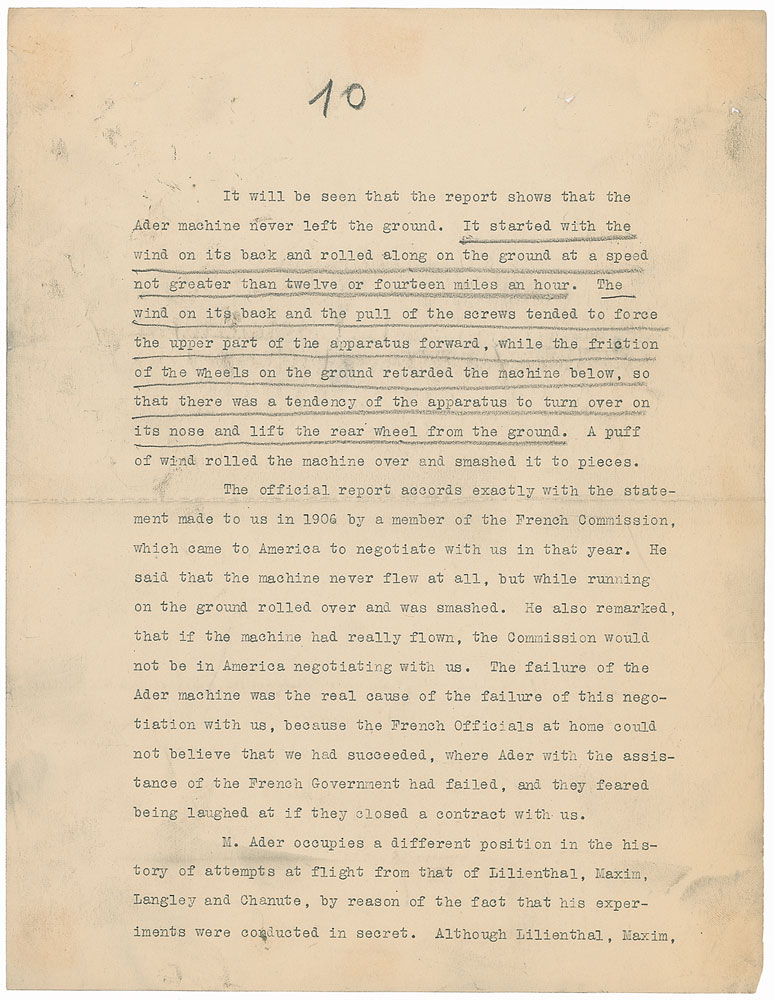 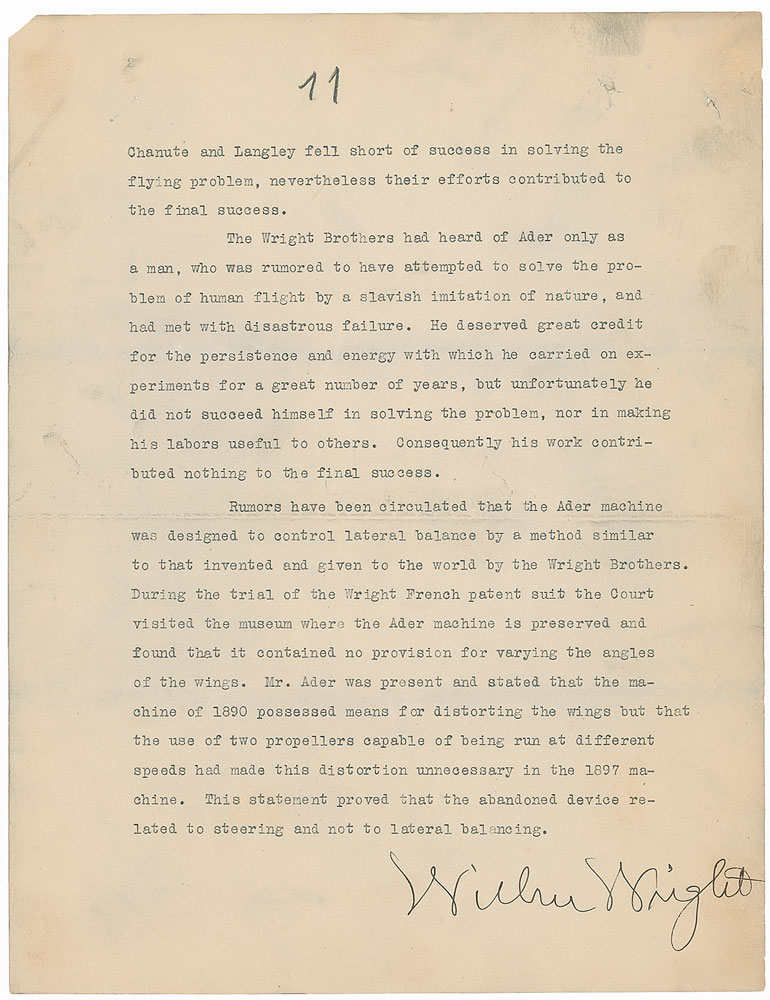 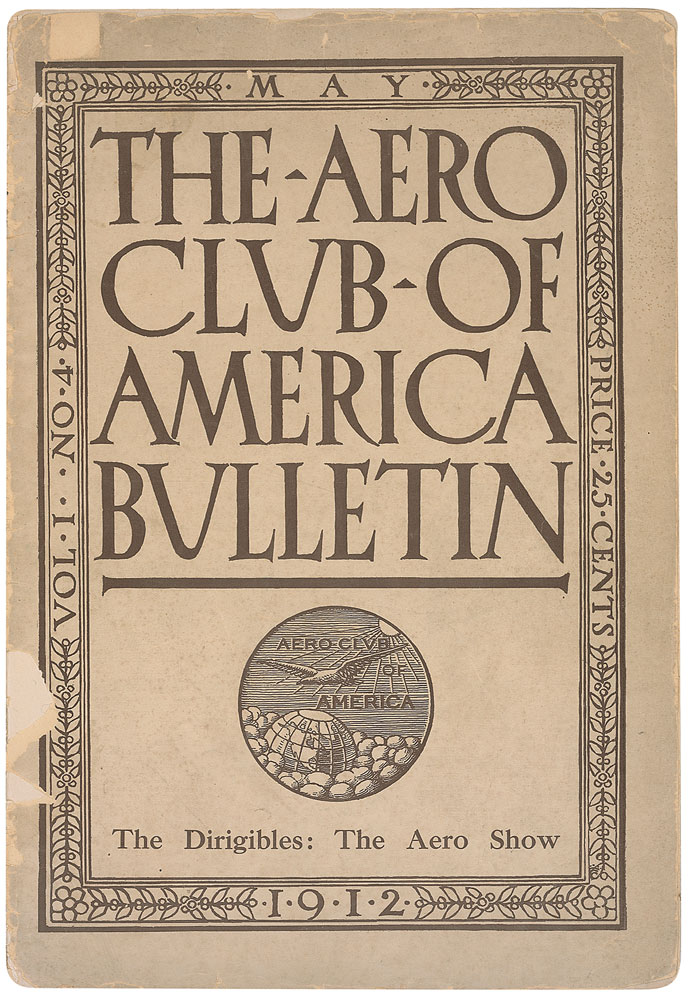 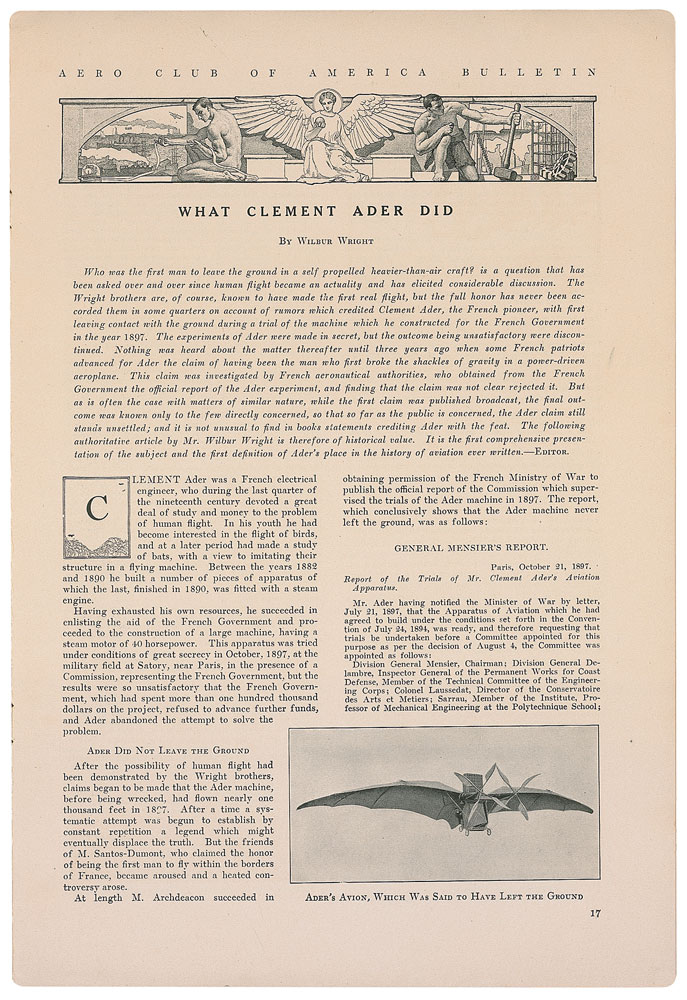 "The Wright Brothers had heard of Ader only as a man, who was rumored to have attempted to solve the problem of human flight," writes Wilbur, "and had met with disastrous failure"

An amazing typed manuscript of an essay entitled “What Clement Ader Did,” which was published in the May 1912 edition of The Aero Club of America Bulletin, 10 pages, 8.5 x 11, signed on the last page in black ink, “Wilbur Wright,” with a couple of additional ink notations in the hand of his brother Orville Wright.

The essay begins: “Clement Ader was a French electrical engineer, who during the last quarter of the nineteenth century devoted a great deal of study and money to the problem of human flight…Having exhausted his own resources, he succeeded in enlisting the aid of the French Government and proceeded to the construction of a large machine, having a steam motor of 40 horse power. This apparatus was tried under conditions of great secrecy in October 1897 at the military field at Satory, near Paris…but the results were so unsatisfactory that the French Government, which had spent more than one hundred thousand dollars on the project, refused to advance further funds.” After the last line, Orville has added “and Ader abandoned the attempt to solve the problem.”

The essay continues: “After the possibility of human flight had been demonstrated by the Wright Brothers, claims began to be made that the Ader machine before being wrecked, had flown nearly one thousand feet in 1897. After a time a systematic attempt was begun to establish by constant repetition a legend which might eventually displace the truth. But the friends of M. Santos Dumont, who claimed the honor of being the first man to fly within the borders of France, became aroused and a heated controversy arose. At length M. Archdeacon succeeded in obtaining permission of the French Ministry of War to publish the official report of the Commission which supervised the trials of the Ader machine in 1897. The report conclusively shows that the Ader machine never left the ground.” The following six pages of the essay show the results of the report.

The last two pages contain Wilbur’s summation and conclusion, and read, in part: “It will be seen that the report shows that the Ader machine never left the ground. It started with the wind on its back and rolled along the ground at a speed not greater than twelve or fourteen miles an hour. The wind on its back and the pull of the screws tend to force the upper part of the apparatus forward, while the friction of the wheels on the ground retarded the machine below…A puff of wind rolled the machine over and smashed it to pieces. The official report accords exactly with the statement made to us in 1906 by a member of the French Commission, which came to America to negotiate with us in that year. He said the machine never flew at all…He also remarked that if the machine had really flown, the Commission would not be in America negotiating with us. The failure of the Ader machine was the real cause of the failure of this negotiation with us, because the French Officials at home could not believe that we had succeeded, where Ader with the assistance of the French Government had failed, and they feared being laughed at if they closed a contract with us…The Wright Brothers had heard of Ader only as a man, who was rumored to have attempted to solve the problem of human flight…and had met with disastrous failure…Consequently his work contributed nothing to the final success.” The essay also contains pencil notations and lines by an unidentified editor from the Aero Club of America Bulletin.

In very good condition, with two horizontal mailing folds, aforementioned notations, staple holes to upper left corners, and scattered soiling. Accompanied by an original May 1912 edition of The Aero Club of America Bulletin.

Published mere weeks before Wilbur’s death from typhoid fever, this essay is one of the final pieces he wrote. At the peak of the excitement over the first public heavier-than-air flight, Frenchman Clement Ader announced that he had flown his machine, Avion III, over 300 feet in October of 1897. Despite the fact that the French Ministry had cut funding for his project immediately after this supposedly successful flight, and despite the fact that the only surviving witness recalled that the wheels had lifted and almost immediately crashed, several historians of aviation began to credit him with the flight. Written with decisive clarity, the Wright brothers address their competitor’s tale with precision and finality, debunking his claim and denying any contribution his failed attempts made to their own work. One of only seven articles published by Wilbur Wright before his untimely death—and one of only two such that is in private hands—this outstanding essay gives voice to the leading pioneer of aviation, passionately defending his crowning achievement. RR Auction COA.