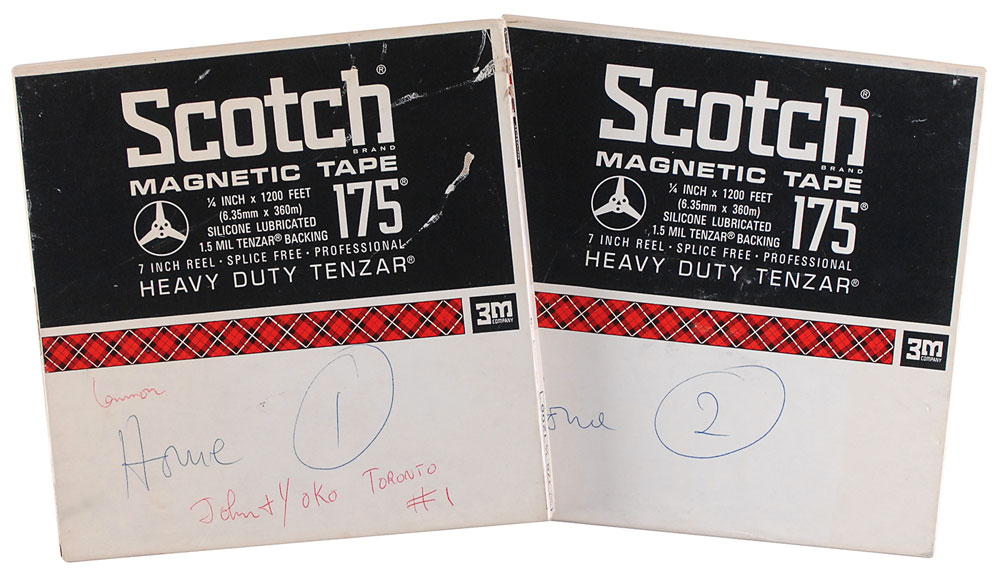 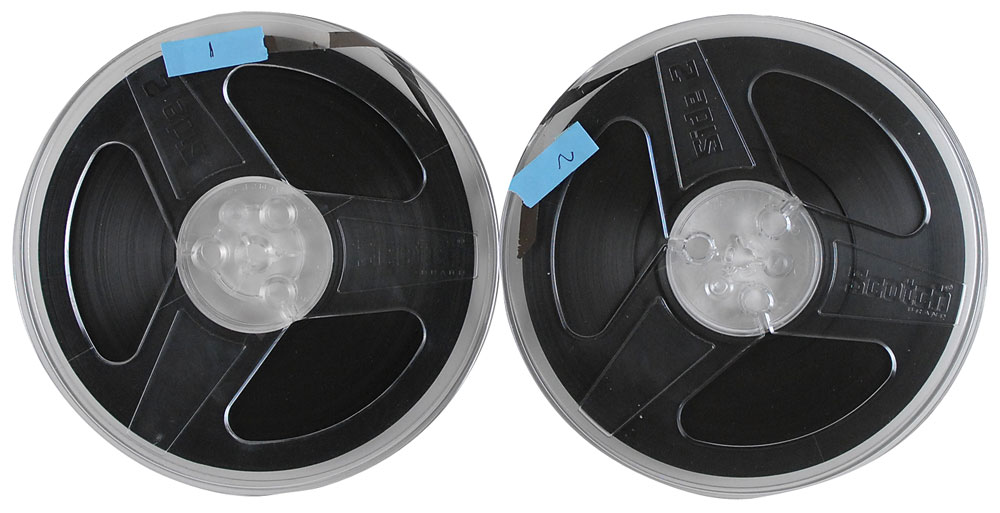 Two reels containing an unedited audio interview with Lennon and Ono conducted by Howard Smith in Toronto around late 1969. Smith, an overnight rock DJ and columnist for the Village Voice enjoyed unprecedented access to such rock luminaries as Lennon, Mick Jagger, Jim Morrison, Pete Towshend and countless others. Both 1200″ tapes are in their original boxes with one labeled in an unknown hand, “John & Yoko Toronto #1,” with the interview having a total running time of slightly over one hour.

In one part of the interview, Smith asks several questions about any touring plans for the band, their upcoming album, and the potential breaking up of the group. Excerpts are as follows:

HS: Will there be more Beatles records coming out soon?

JL: “There’s a Beatles album coming out in January which we finished a few months back…Get Back…It was the one that was originally scheduled before Abbey Road…to tie it up with the film which is a documentary of us suffering making the thing.”

JL: “We were going through hell. We often do…It’s torture every time we produce anything…The Beatles haven’t got any magic you haven’t got. We suffer like hell anytime we make anything. And we got each other to contend with. Imagine working with the Beatles, it’s tough.

HS: Whose songs will be on the album?

JL: “All of us…It’s a strange album…We never really finished it…we didn’t really want to do it. Paul was hustling for us to do it…It’s the Beatles with their suits off.

HS: How do you decide whose songs go on the album now that George is writing?

JL: “We hustle for it…in the old days Paul and I won…I don’t know personally if there will ever be another Beatle product with the four of us on again…In the old days Paul and I wrote most of the songs because George wasn’t prolific. We encouraged him to an extent, subconsciously we would have just made sure we got the LP for ourselves…Now there’s three of us all trying to squash ourselves onto 14 tracks…Do we make a double album everytime…that’s why I broke out with the Plastic Ono Band.”

HS: Do you get into a lot of actual arguments while you’re recording?

HS: There’s no plan for the four of you to get together and do something?

JL: “No. We’ve got an album and a film in the can. I’m going to try and hustle some of them, all, for the peace festival [the July 1970 Toronto Peace Festival].”

HS: There have been rumors that you are breaking up. Is that true at all?

JL: “Ringo’s left once, George has left once for a couple of days

HS: Any chance the Beatles will tour ever again?

JL: “It was just a drag. I don’t know how the Stones did this tour…It was complete madness from morning till night, not one moment’s peace…Living with each other in a room for four years on tour, we toured for four years…Of course there were many great moments…when we talk about it there’s many laughs, but when you get down to the physical reality it was all pain because there was nothing in the music. We would get no feedback…we weren’t improving…half the time we would just mime on the mic because your voice had gone. The kids would just be howling.”

JL: “I’d give you 90 dollars to one of we came on the road again maybe the first time it would be just like that again because the myth still exists. I can judge it by the reaction to one Beatle, one lone Beatle and his Japanese bride wandering around. You multiply that by four times the hype and the pressure…and the publicity…You saw what happened to the Stones…they hadn’t done it for four years in the States…It was like Stone mania again, so if the Stones can do it, the Beatles certainly would do it.”

HS: How long has it been now?

JL: “Four years or five. I’m not against performing, but performing as a Beatle is like such a myth and an aura about it that they expect Jesus, God, and Buddha…For the Beatles to come on, we would have to come on and do a miracle.”

JL: “It’s an anti-climax to the build-up of the myth, the myth is bigger than the actual four human guitarists, three guitarists and a drummer. The myth is bigger than the reality…I’m inclined to leave them with the myth. If the Beatles would split open the group a bit and have Yoko, and Billy Preston, Bob Dylan, Eric Clapton, and Elvis Presley in the group I might be interested. But as the Fab Four I’m not personally interested in going out like that.”

HS: Are any of the Beatles?

JL: “A few months back it was George that didn’t want to…There was a point where I was trying to get him out on the road…and I ended up out here on my own rocking with Yoko.”

HS: How about Ringo? Is he mainly interested in being an actor?

JL: “He knows the Beatle thing isn’t going to go on…So he’s got a job…he’s a natural comedian…he will be filming for a long time. He’s not as big a hustler as me publicity wise.”

HS: I heard he was the main one that wanted the Beatles to dissolve.

JL: “No. There’s no main one that wants the Beatles to dissolve…no decisions like that being made. We’re just four guys with different points of view that change every now and then …we just change our minds every now and then.”

Lennon begins the interview discussing his political activism, as he is in Toronto making plans for a peace festival in July of 1970, with faint hopes the rest of the band might join him there. Unfortunately, the required permits were denied, and it was later revealed that John and Yoko were under the scrutiny of the Canadian security service. He also discusses his continued support of James Hanratty’s family eight years after his execution, makes mentions of his bed-in in Montreal, and their “War Is Over” billboard campaign.

The most interesting pieces of the interview naturally center around the final months of the Beatles, as Lennon openly discusses the difficulty of each member campaigning for their own songs to be included, the tension in the studio, and the ridiculous public expectations placed upon the band. Originally titled Get Back, the album was reworked by Phil Spector and retitled Let It Be, their final studio album. This particular interview goes hand-in-hand with the opinions of many rock historians about the recording of the album, as John echoes the sentiments of the aggravation and discord amongst the members that led to their eventual break-up later that year. A never-before-released frank and honest interview from one of the most revered musicians and activists of all time. RR Auction COA.