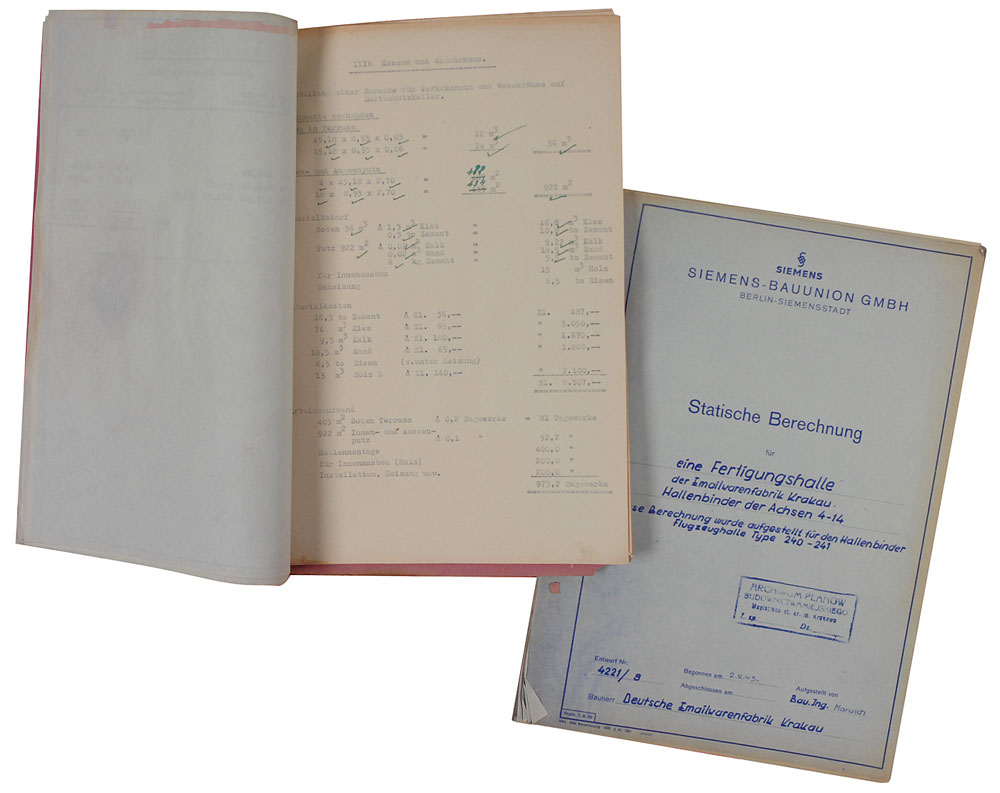 Extraordinary collection of construction plans in German for Schindler's Krakau munitions factory, consisting of two bound folders full of planning material and a set of 12 large sheets of period carbon or printed engineering plans displayed in nine frames. One red folder is labeled on the front by contractor Siemens-Bauunion G.m.b.H., 9 x 12, February 2, 1943, 37 pages, and contains extremely detailed calculations regarding the construction of the building (primarily material weights and structural loads), as well as a few architectural drawings.

Schindler's enamelware manufacturing company had been operating in his Krakau plant, called 'Emalia,' for four years when he contracted with Siemens-Bauunion (which was a major contributor to the Nazi Party and utilized Jewish slave labor) to construct a large, hangar-style building to be used as a stamping facility—the building referenced and depicted in these plans. After breaking ground in the fall of 1943, Siemens finished construction in the summer of 1944—although it was the largest building at Emalia, the hangar went essentially unused, as Schindler had to relocate to Brunnlitz that October.

Behind the new building were living quarters for the Jewish workers, a space where they were safe from the atrocities that went on at the nearby Plaszow concentration camp. Though driven initially by greed—Schindler wanted his workers to be as productive as possible—he had gone bankrupt by the end of the war, having spent his entire fortune on facilities, bribes, and supplies for his workers. Schindler went to great expense to ensure that they were as comfortable as possible—among the other things he built were health clinics, kitchens, bathrooms, and laundry rooms, among other rooms and structures. His Krakau factory complex provided a haven for Jewish workers caught up the greatest horror of our time—a sanctuary that offered protection from the systematic genocide occurring outside its walls. As the plans used to build a portion of Schindler's quasi-fortress, this collection holds a truly remarkable place in history. RR Auction COA.