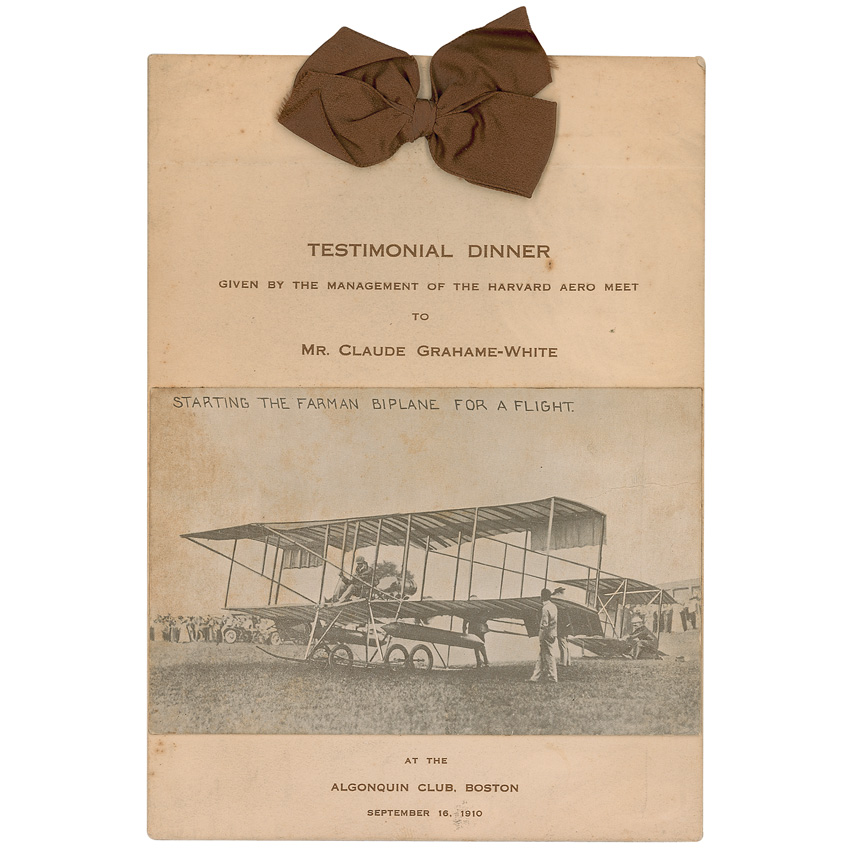 Menu for the testimonial dinner honoring Claude Grahame-White after the 1910 Harvard Aero Meet, 5.5 x 8, September 16, 1910, signed on the reverse in pencil by 21 race participants and organizers, including Claude Grahame-White, A. V. Roe, William A. P. Willard, Governor Ebenezer S. Draper, Sydney MacDonald, Charles J. Glidden, Abbott Lawrence Rotch, A. A. Merrill, Charles H. Taylor, Carl A. Sylvester, Alfred R. Shrigley, George M. Cox, John W. Luce, Clarence W. Barron, James J. Meade, J. Howard Edwards, D. Frank Lord, Alonzo D. Peck, and Hugh Bancroft. Menu bears a brown ribbon tied in a bow at the top, and an affixed photo of Grahame’s Farman biplane. In very good condition, with scattered toning and some brushing to the signatures. Accompanied by a map of the aviation field and a program for the meet, featuring biographies of the participating aviators and summaries of the events and prizes. The meet was the second major aviation race ever held in the United States, and Grahame-White won the $10,000 grand prize at the event. Willard, an organizer of the event who also signed the program, would meet tragedy at the Harvard meet two years later, in a fatal crash with Harriet Quimby, the first woman in the United States to earn a pilot's license. Roe founded a British aircraft manufacturer, Avro, which played a key role in developing military planes during both World Wars. This program is a truly one-of-a-kind piece from the early days of flight. RRAuction COA.