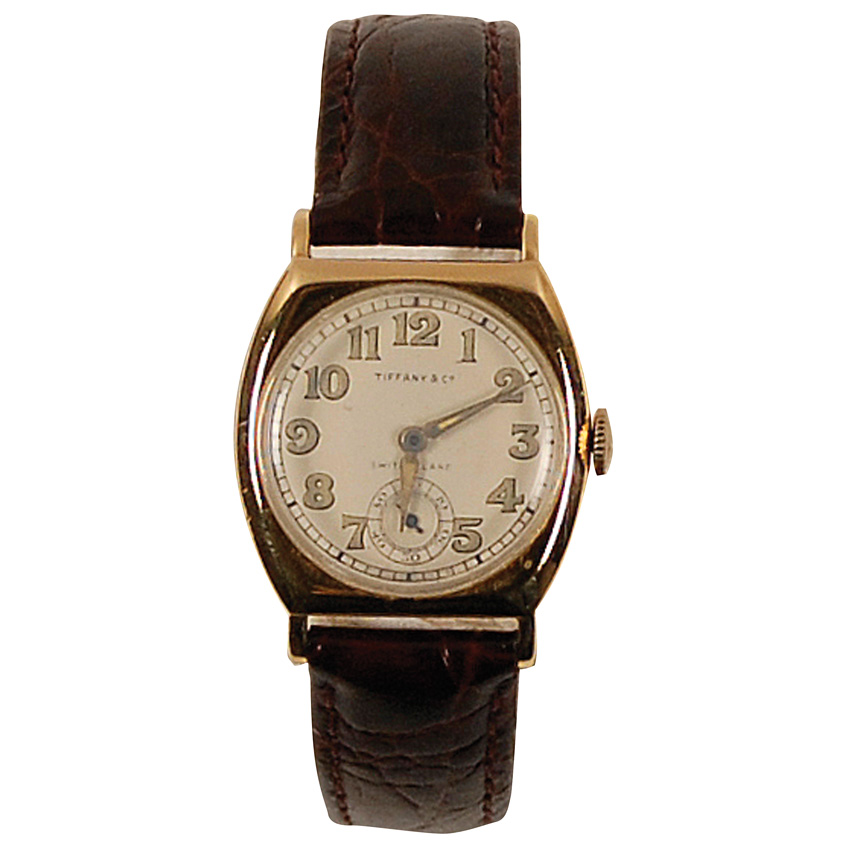 An 18k solid gold Tiffany & Co. wristwatch presented to Milburn Kusterer by Charles Lindbergh to commemorate their 1927 tour of the United States and Kuster’s first flight with Lindbergh taken on October 25, 1927, from Mitchel Field in Long Island, New York to Teterboro, New Jersey. According to the flight log of the Spirit of St. Louis, Kusterer was the final passenger on the historic aircraft prior to its donation to the Smithsonian Museum. Watch face measures 1” in diameter, has an inlaid second hand, and is engraved on the reverse, “From Charles A. Lindbergh to Milburn Kusterer October 23, 1927.” Watch is in good working order and bears a contemporary alligator skin band, but is accompanied by its original cloth strap. Accompanied by a photocopy of a letter of provenance from Kusterer’s granddaughter which reads, “This watch was given to my grandfather, Milburn Kusterer, to commemorate his first flight with Lindbergh. The flight occurred on October 25, 1927. The flight was 40 minutes long. As was told to me, Mr. Lindbergh had the watch engraved two days earlier and gave it to him after the flight was over. Milburn Kusterer worked for Mr. Lindbergh as a publicist and front man organizing his many tours.”

Upon Lindbergh’s return to the United States after his transatlantic flight, Harry F. Guggenheim, on behalf of the Daniel Guggenheim Fund for the Promotion of Aeronautics, and the US Department of Commerce sponsored Lindbergh’s tour of the United States from July 20, 1927, to October 23, 1927, for the purpose of promoting commercial aviation. The tour team consisted of Lindbergh; Donald E. Keyhoe, aid to Lindbergh and tour manager; Milburn Kusterer, advance man; Philip R. Love, pilot of the airplane that followed the Spirit of St. Louis; Ted Sorenson, the initial airplane mechanic; and Cecil C. Maidment, who replaced Ted Sorenson as airplane mechanic during the tour. The details of the Guggenheim tour and the relationship of the tour team is described in the book Flying with Lindbergh authored by Donald E. Keyhoe and published in 1928 by G.P. Putnam’s Sons. At the conclusion of the tour on October 23, 1927, Lindbergh made a personal gift of a gold wristwatch to each of the members of the tour party engraved in memory of the tour. The gift of the wristwatches is described on page 297 of Flying with Lindbergh.

In good running order, the plates with normal thinning of plating at the edges, the dial in fine clean original condition showing hardly any tiny speckle or powdery tarnish some bezel rubbing or contact tarnish visible only with movement out of the case, hands with fine gilding, good complete radium, case showing light wear and few tiny nicks overall, the back inscription fully legible with even wear overall, the case interior with numerous repair marks from regular servicing over the years. The acrylic crystal has some cloudiness, and might be changed for better dial visibility. The original crystal was glass. The new strap shows very little use, while the original period canvas strap is in fine condition with normal soiling and wear to the plated buckle.