An extraordinary personal letter written on the run and signed with his alias 'Bud': "We may go to no telling so we will write you later" 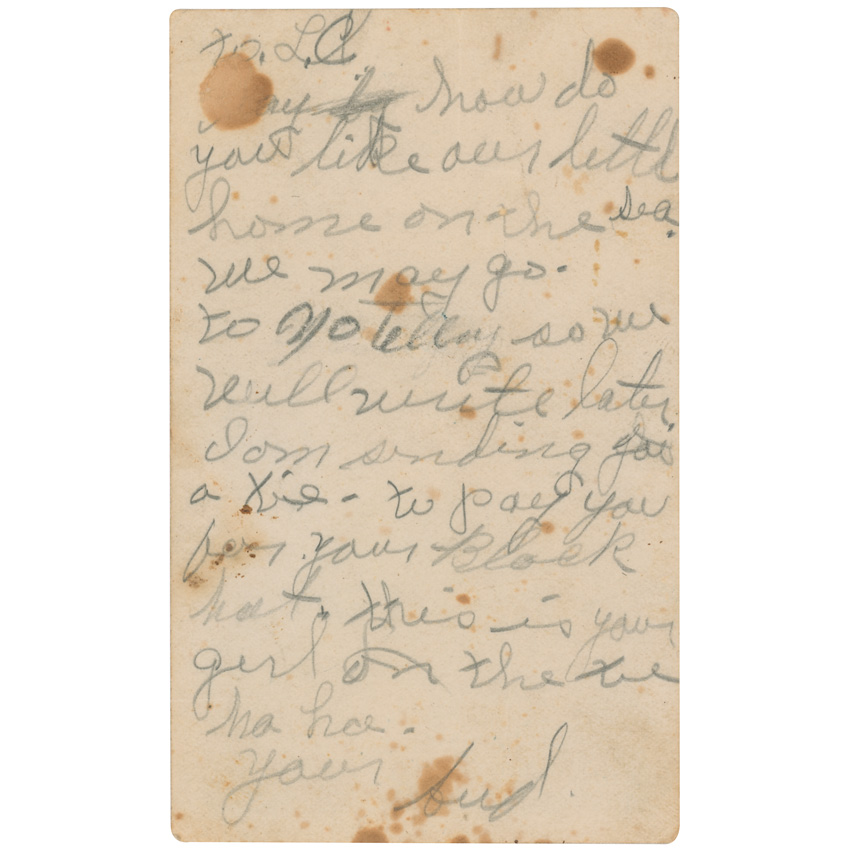 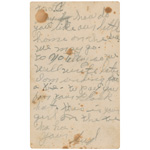 An extraordinary personal letter written on the run and signed with his alias 'Bud': "We may go to no telling so we will write you later"

ALS signed “Bud,” one page, 2.75 x 4.5, no date. Letter to his brother, L. C. Barrow, written on the back of a candid snapshot photo of a small house on a platform surrounded by water. Barrow writes, in full: “Say how do you like our little home on the sea. We may go to no telling so we will write you later. I am sending you a tie—to pay you for your black hat. This is your girl on the tie. ha ha.” In very good condition, with scattered spotting, soiling and foxing to correspondence side, some over signature, and scattered noticeable creasing and spotting to image side. Accompanied by a notarized letter of provenance from Barrow’s sister Marie, which reads, “This is a picther [sic] with letter on back wrote [sic] to my brother, he used the name Bud. Ever [sic] one knew that was the way he signed his name while on the run. Bud was a code for Clyde Barrow, who wrote this letter to my brother L. C. Barrow.”

No matter where their travels took them, Bonnie and Clyde remained in touch with their family members, writing and secretly visiting whenever they could. In this quick letter to his younger brother L. C., Clyde – known to his family and friends as ‘Bud’ – lets him know that they’re still, as always, on the run and hiding out where they can. According to historian Jonathan Davis, this "little house on the sea" was on the Gulf of Mexico, where the outlaws stayed at different times. Shortly after the ambush in 1934, prosecutors went after most of the couple’s family members for harboring fugitives. L. C. served two years on this count, and an additional three for an armed robbery that he did not commit and was later acquitted of. He was the only of the four Barrow boys to straighten up his life once the dust settled from his brothers’ crimes and deaths. Anything written by Barrow is incredibly rare; this personal note to his little brother, written from a hideaway presumably at the height of the Gang’s infamy, is absolutely extraordinary, far surpassing any we have seen.