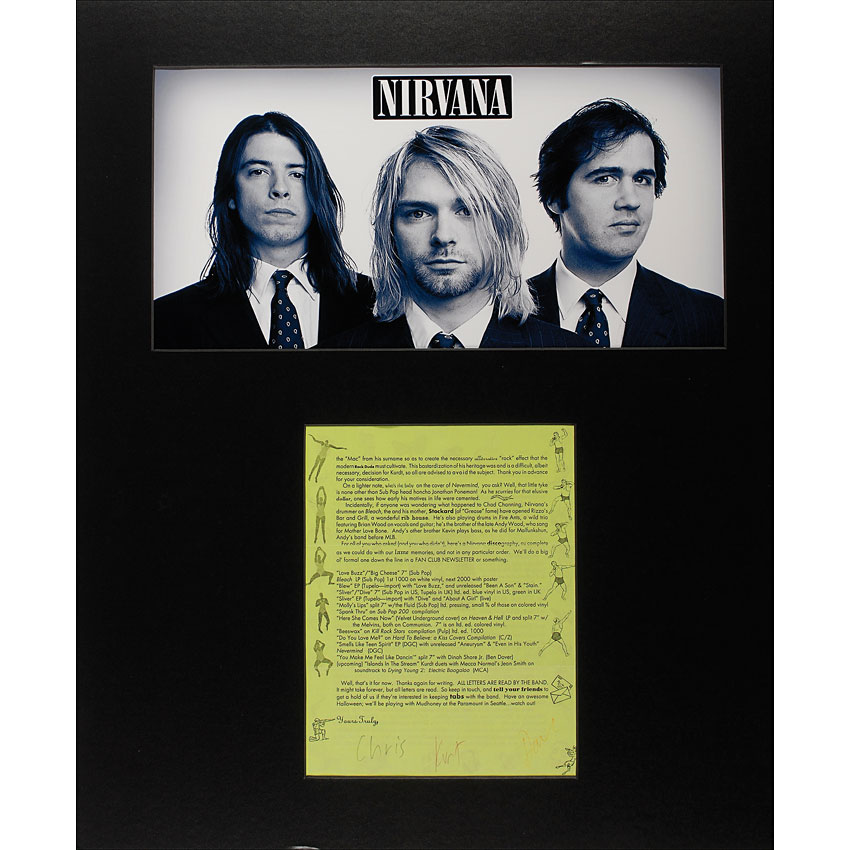 Printed TLS, signed “Kurt,” “Chris,” and “Dave,” one page both sides, 8.5 x 11, October 10, 1991. Early printed form letter, sent out just after the release of their album Nevermind. In part, “We haven’t set up a fan club just yet, but we probably will soon…By now you may have heard about the Nevermind record release party, thrown at Rebar in Seattle on Friday the 13th of September, during which a cool $2000 worth of draft beer was consumed by just 200 people in 2 hours. It also goes down in history as the only record release party where the band was thrown out (Chris started a food fight that got a little out of hand)…On a lighter note, Who’s The Baby on the cover of Nevermind, you ask/ Well, that little tyke is none other than Sub Pop head honcho Jonathan Poneman! As he scurries for that elusive dollar, one sees how early his motives in life were cemented…So keep in touch, and tell your friends to get a hold of us if they’re interested in keeping tabs on the band.” Signed at the conclusion in felt tip and ballpoint by all three band members, first names only. Signed side is matted with a group photo, to an overall size of 23 x 27. Both Curt Cobain and Krist Novoselic spelled their names a couple of different ways in the early days of the band, and this particular newsletter discusses the different spellings of Cobain’s name. Grohl’s signature faded, but still legible, as well as some light fading to Novoselic’s signature, otherwise fine condition. Accompanied by a letter of authenticity from James Spence. Oversized. RR Auction COA.