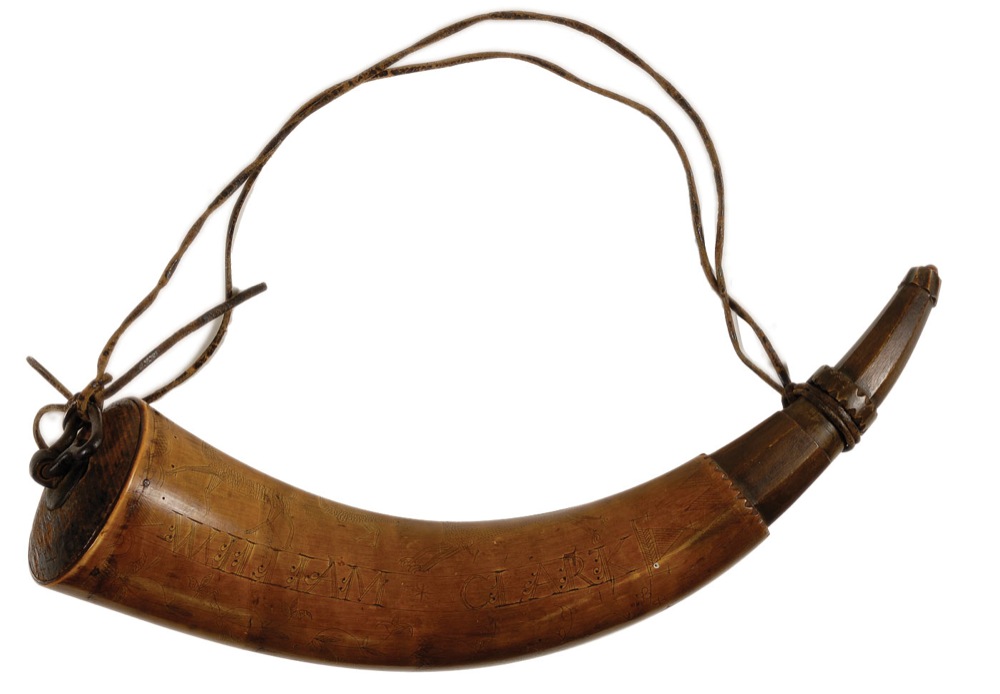 Ornately detailed, hand-carved powder horn, 14.5 x 3, with a 4″ wooden plug and leather carrying strap. Primitive images of various animals are hand-etched into the sides, including a deer, bird, alligator, fish, and a mountain lion, between twin legends WILLIAM CLARK and WILLI[A]M CLARK 1785, with additional floral motifs. Horn has two octagonally faceted sections tapering towards spout, spirally fluted tip, base plug with attached iron swivel, and leather hanger. In fine condition, with some trivial scratching and a small puncture hole from previous mounting. This horn originates from the collection of Gaines de Graffenried, who served as the curator of exhibits at the Texas Ranger Hall of Fame in Waco until his death in 1991, and was sold as part of his collection by Christie’s in New York in 2001.

After the end of the Revolutionary War, Clark's two oldest brothers, General George Rogers Clark and Colonel Jonathan Clark, made arrangements for their parents and family (including fifteen year old William) to move from Virginia to what would later become Kentucky. It was here that George Rogers Clark taught William the wilderness skills that would prove so critical eighteen years later when he and Meriwether Lewis led the Corp of Discovery in the exploration of the recently acquired Louisiana Purchase. On that expedition, Clark utilized what he learned about reading terrain to draw critical maps and he also led hunting expeditions for game, a skill he learned during this time and with, it has been deemed likely, this very powder horn. This is a fascinating item representative of the wilderness skills that were so necessary for the expedition that opened up the American west. RRAuction COA.