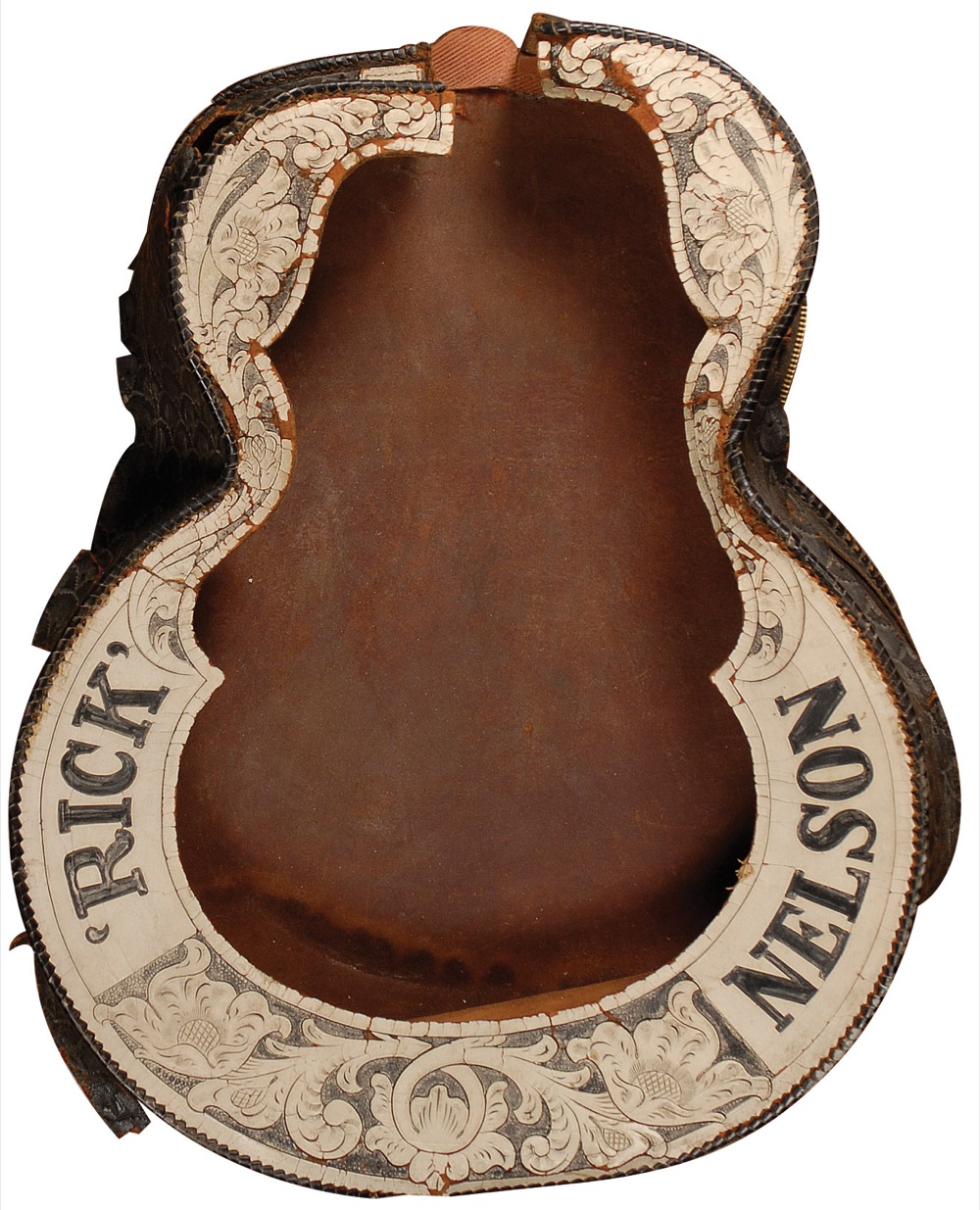 Custom-made red, white, and blue bodied six-string acoustic guitar, presented to Nelson by country star Buck Owens. Guitar comes with a custom leather casing, heavily scrolled and embossed, with “’Rick’ Nelson” added to the sides of the casing. Accompanied by a letter of provenance from Owens which reads, in part: “Simi Mosley helped me design this guitar back in 1965. I am sure you are aware that Simi was the maker and designer of the Mosarite [sic] Guitar…They were first released for sale in 1966. Along about that time, or a year or two later maybe, Rick Nelson did a concert here in Bakersfield, at which time I presented him with a Red, White & Blue © guitar.”

The back of the headstock of the Gibson-made instrument is stamped with ‘MODEL NO. 319 – 12190100 – MADE IN USA.’ The custom-made, hand-tooled leather casing is reminiscent of the one Nelson made famous during the late 1950s. Comes with its original case. In fine condition, with expected wear and scratches to body, vertical cracks to body’s finish, and light surface wear to the neck, fingerboard, and head. Leather casing rates good, with expected age wear, crazing, and separations. It is no surprise that Buck Owens choice as a gift to Rick Nelson would be a red, white, and blue guitar, as his affinity for the patriotic color-schemed instruments was well-known. In fact, he was regularly seen during his tenure as the star of his television show, Hee-Haw, playing such guitars.

Although Nelson was a casualty of 1964s ‘British Invasion, like so many other American acts, by decade’s end he had reemerged at the forefront of the evolving ‘county rock’ genre. By the time Buck Owens presented Nelson with this guitar, he was ardently pursuing that transformation, having long ago left behind the teen idol persona of Ricky Nelson, opting for the more mature ‘Rick.’ Nelson’s induction into the Rock & Roll Hall of Fame in 1987 was, unfortunately a posthumous one; the 45-year old having perished in a tragic plane crash in 1985.