Apollo DSKY unit direct from the CM trainer at Johnson Space Center, used by every Apollo crew including Neil Armstrong 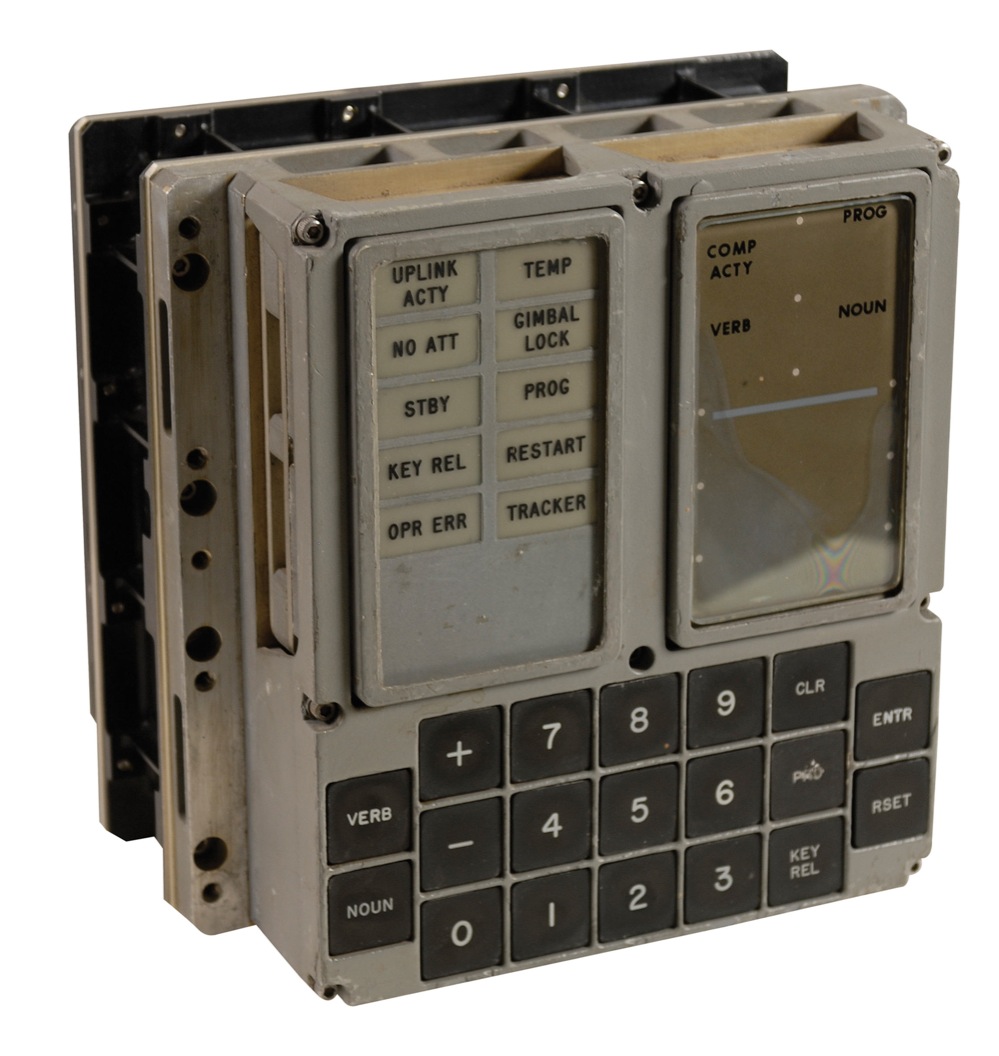 Apollo DSKY unit direct from the CM trainer at Johnson Space Center, used by every Apollo crew including Neil Armstrong

Extremely important original Apollo Guidance computer display and keyboard (DSKY) unit, removed from the CM simulator at the Johnson Space Center, and used by every Apollo crew member. A 17.5 pound, 8 x 7 x 7 data entry and display device with 19 keys, including a calculator interface, and a 21 digit display, serial #186372. This was the instrument that allowed the astronauts to communicate directly with the on board guidance computer. The digital readout in the upper right would display data, with ten status indicator lights to the upper left. The Command Module had two DSKYs connected to its AGC; one located on the main instrument panel and a second located in the lower equipment bay near a sextant used for aligning the inertial guidance platform. It was the DSKY that provided the astronauts with critical burn times for engine firings, course corrections, trajectories, and other key calculations vital in getting a crew to and from the moon. It was also the DSKY that almost caused an abort of the Apollo 11 mission, as it was blaring a Program Alarm shortly before the Lm touched down on the lunar surface.

This very unit has an amazing history. Removed from the primary Command Module simulator at the Johnson Space Center, every Apollo crew trained in this simulator, using this very DSKY. Accompanied by a 1984 letter of provenance from Ron Baker of NASA’s Technology Utilization Support Section about the unit, which reads, in part: “This specific number has some history behind it. Based upon the I.D. Number you sent from the back of the unit (#186372), I was able to confirm that it had been removed from the Apollo CM trainer that was originally located in Building 5 here at JSC. I was part of the team that disassembled the simulator several years ago…As I remember, this computer unit was fully functional when it was in the simulator.” Normal used condition.

Training on the DSKY was critical for every aspect of the mission. This was the astronaut's interface, allowing access to the Apollo Guidance Computer developed by MIT. The device permitted the astronauts to collect and provide flight information necessary for the precise landings on the moon. Each different program had a two-digit code and commands were entered as two-digit numbers in a verb-noun sequence. These units were also used on the Skylab missions. It is nearly impossible to overstate the importance of the DSKY interface to the success of the Apollo program, with this artifact rarely offered—with only about 75 believed ever to have been manufactured, at an original cost to the federal government of more than $200,000. Every Apollo crew member, including Armstrong, Aldrin, and Collins, trained for hours in that simulator on this piece of equipment, as it was one of the most important and critical instruments to landing a man on the moon. RRAuction COA.