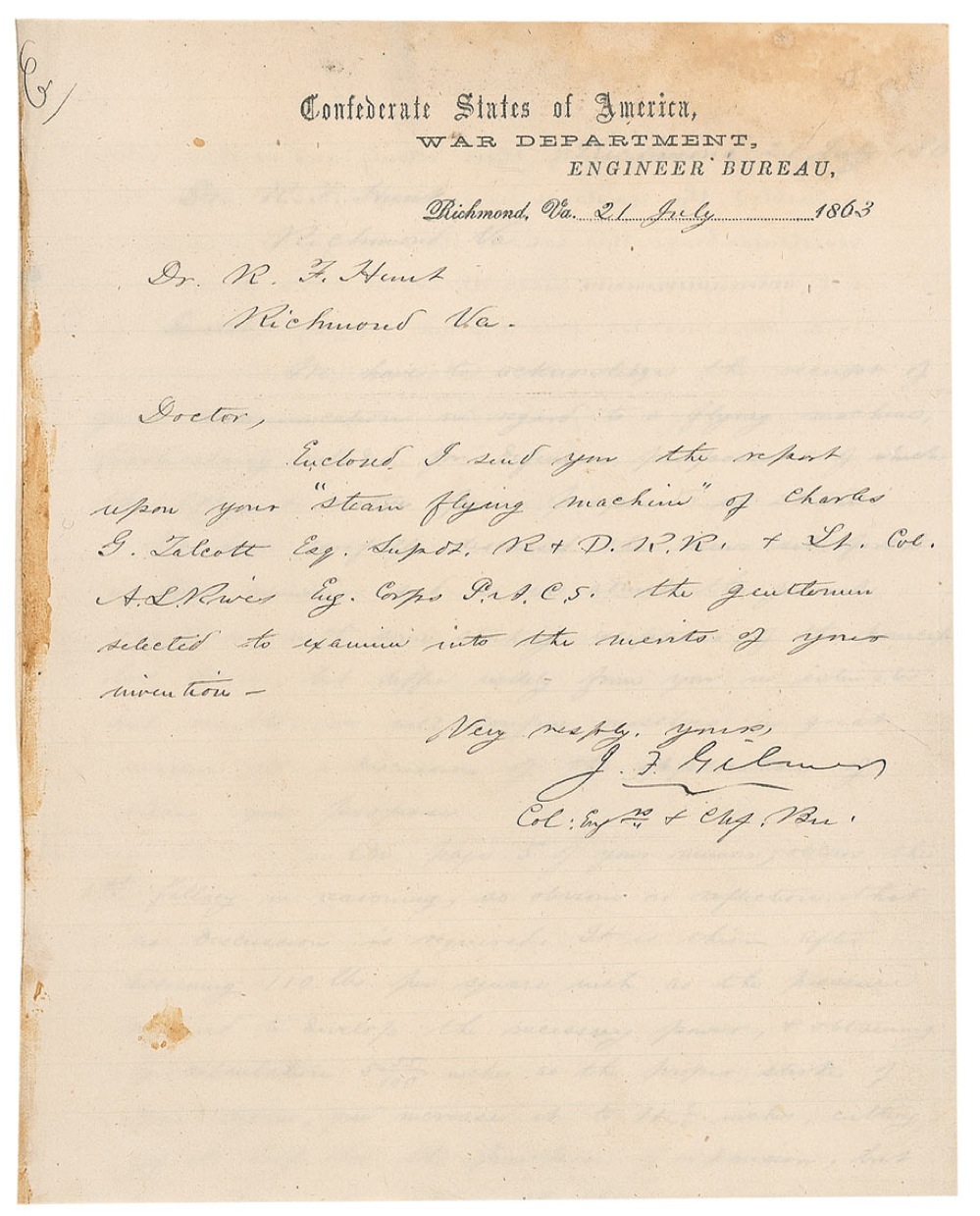 Detailed archive consisting of a collection of letters, notes, and drawings relating to Dr. R. Finley Hunt's invention of a flying machine which he offered to Confederate President Jefferson Davis in 1863 and 1864. Many notes and drawings are on blank pages and in blank portions of pages in a 286 page hardcover account which measures 8 x12.5. Some retained copies of letters written by Hunt and letters to Hunt are affixed to pages, with others being loose from the book. Also included are many original newspapers clippings, mostly from the 1890s, about flying machines, many about the Smithsonian's Samuel P. Langley. Highlights of the collection include:

– Dr. Hunt's drawing in pencil of a pilot guiding his flying machine

– Retained signed copy of Dr. Hunt's detailed letter to the Board, an Autograph Letter Signed “R. Finley Hunt,” seven pages on four lightly-lined sheets, 8 x 12.5. In small part: “I wish to lay before you as a Board to whom the subject has been referred by the President [Davis] a partial exposition of my plan of a simple arrangement of machinery for navigating the air for purposes of transportation and travel, but more particularly with a view to operations of war in the present crisis…” Hunt then explains in detail his invention. In part, “The main principle of philosophy which I call into action and apply in my invention in the 'vis inertia' of the atmosphere more commonly spoken of as the resistance which the air offers to bodies passing through it; the invention itself consists of the arrangement and operation of machinery and appliances, which, meeting the resistance of the air give us the means of ascension and propulsion as well as guidance…With plane surfaces passing through it at right angles with their planes, the rule as far as established by science is that when the velocity is doubled the resistance is quadrupled. To illustrate this principle of resistance I have arranged a lever which I will exhibit to you in which the fulcrum is at one end and the power is at the other…”

– LS signed “Chas G. Talcott Supt R & DRR” and “A.L. Rives, Lt. Col. Engrs. P.A.C.S.,” three pages on two 7.5 x 11.75 sheets, July 21, 1863. To Dr. Hunt, in part: “We have to acknowledge the receipt of your communication [see (2) above] in regard to a flying machine, particularly intended for defensive purposes & of which the lifting & motive power proposed is steam. We have carefully discussed the views set forth in your memoir and as we admit the general correctness, with some striking exceptions, of the principles laid down, but differ widely from you in estimates and results, we will confine ourselves in great measure to a discussion of the application of steam you propose. On page 5 of your memoir, occurs the 1st fallacy in reasoning, so obvious on reflection that no discussion is required. It is this - After assuming 110 lbs per square inch as the pressure required to develop the necessary power, & obtaining by calculation 5 55/100 inches as the proper stroke of your engine, you increase it to 11 1/10 inches, cutting off at half for the purpose of expansion, but by so doing you reduce the pressure on the piston to less than that constantly required, & to such a degree that at the extremity of the stroke it will amount to only one half of that required. On page 6 occurs the 2nd fallacy…”

– Retained signed copy of Hunt's letter to Col. Gilmer, one page, both sides, 8 x 12.5, July 28, 1863. To J.F. Gilmer, Col. Engr & Chf. Bureau. In part, “Pardon me for addressing you on the subject of my invention of a flying machine after the decidedly adverse report of the gentlemen composing the board selected to examine into its merits. But a desire that those gentlemen may not in future have injustice done to them will be my sufficient apology. In making that report they evidently misapprehended to a great extent my plans and views and this was partly my fault in not being more explicit and full in details and partly my misfortune in not being allowed (as I requested) to make verbal explanations of points that might seem doubtful or objectionable to the circumstance…” Dr. Hunt then explains some of the criticisms of Talcott and Rives report.

– Retained signed copy of Hunt's letter to President Jefferson Davis. ALS, signed “R. Finley Hunt,” one page, both sides, 7.75 x 12.5, January 25, 1864. Letter to “His Excellency Jefferson Davis, President, Confederate States of America.” Letter begins: “Mr. President. On the 27 day of April last I had the honor to lay before you the subject of my invention of a flying machine intended to be used for war purposes in the existing conflict. You very kindly heard me & referred me to your Aid Col (now Gen) [Robert E.] Lee, who after some delay, referred me to Col. Gilmer Chief of Engineers Bureau, who appointed a Board to whom he referred the subject. That Board condemned my plan without fully understanding my views, inasmuch as they based their report of July on a partial written exposition of my plan without receiving the verbal explanations that I desired to offer and which I had reserved from fear of making my memorial too voluminous. I then determined to work at my Profession [dentist] and make the little money required to test the practicability of my invention. I did so but then found that the Government had in its employment and beyond my reach all the available mechanical skill. I endeavored to obtain the services at my own cost of a competent man from various officers but thus far my efforts have been fruitless. I now make this last appeal to you Mr. President that a leave of absence for thirty days may be granted to Mr. N. Hays a machinist in the armory…” At the end of this retained copy, Dr. Hunt has penned a 19 line explanation of his efforts to obtain the services of M. Hays including applying to the Secretary of War and trying to speak personally to Col. Gorgas.