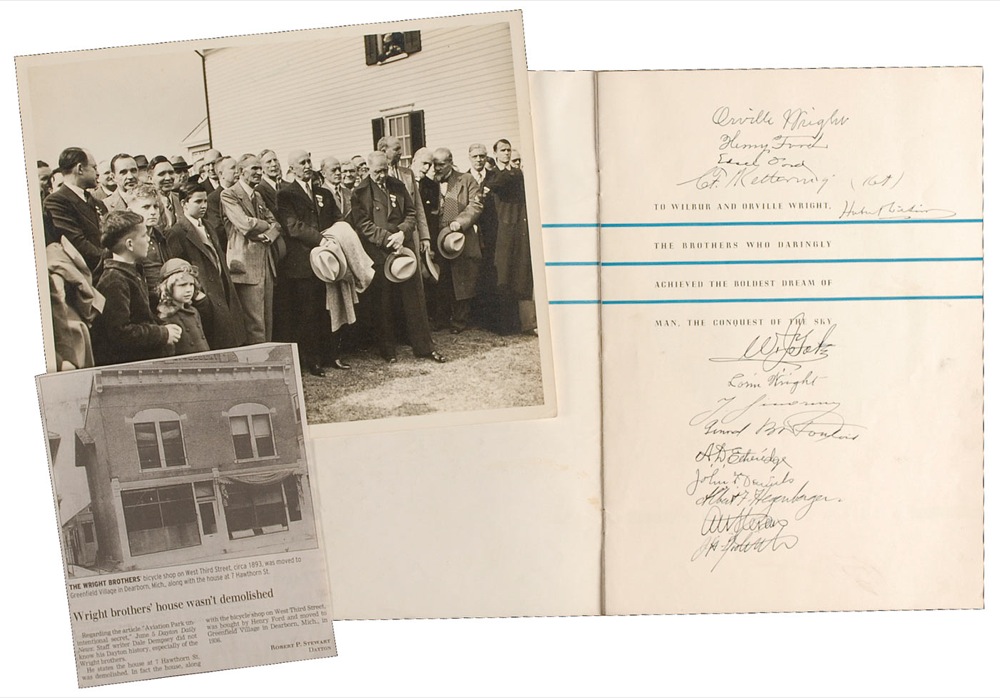 Program, 7.5 x 10.75, for “A Celebration in Honor of Wilbur and Orville Wright,” held at the Edison Institute in Dearborn, Michigan on April 16, 1938, the date of the opening of the Wrights’ restored house and bicycle shop and Wilbur’s birthday. Signed on the first inside page in black ink by Orville Wright. Henry Ford, Edsel Ford, Charles Kettering (inventor of the automotive self-starter and a friend of the Wrights), W. J. Tate (keeper of Currituck Sound Lights, who assisted the Wright brothers in many ways during the period of their earliest flights at Kitty Hawk from 1900 to 1903), Lori Wright (Orville and Wilbur’s brother), Igor Sikorsky (developed the first modern helicopter), James Doolittle, General B. D. Foulois, A. D. Etheridge and John T. Daniels (members of the Kill Devil Life-Saving Station who assisted the Wright brothers and witnessed the first flight, with Daniels taking the only photograph of the historic event), Albert F. Hegenberger (whose pioneering work in instrument flying and navigational systems led to modern aviation equipment, enabling planes to fly anywhere in almost all weather conditions), Hubert Wilkins (pioneer in the method of air exploration, he was the first to fly from North America to the European polar regions), and A. W. Stevens (credited with taking the first photograph showing earth's curvature). Also signed on an inside page in black ink by Walter Brookins, the first civilian student of the Wright brothers. Accompanied by an original and unsigned vintage 10 x 8 matte-finish photo of Orville Wright, Henry and Edsel Ford, Charles Taylor, Foulois, Kettering and others taken at the dedication of the Wright home and workshop in Dearborn, Michigan on April 16, 1938, originally acquired from the Wright brothers’ secretary. Mounting remnants to back cover, light handling wear and a few stray ink marks and light soiling, otherwise fine condition. Certainly a historic and probably one-of-a-kind collection of signatures of pioneers of aviation, some directly associated with the first flight. RRAuction COA.