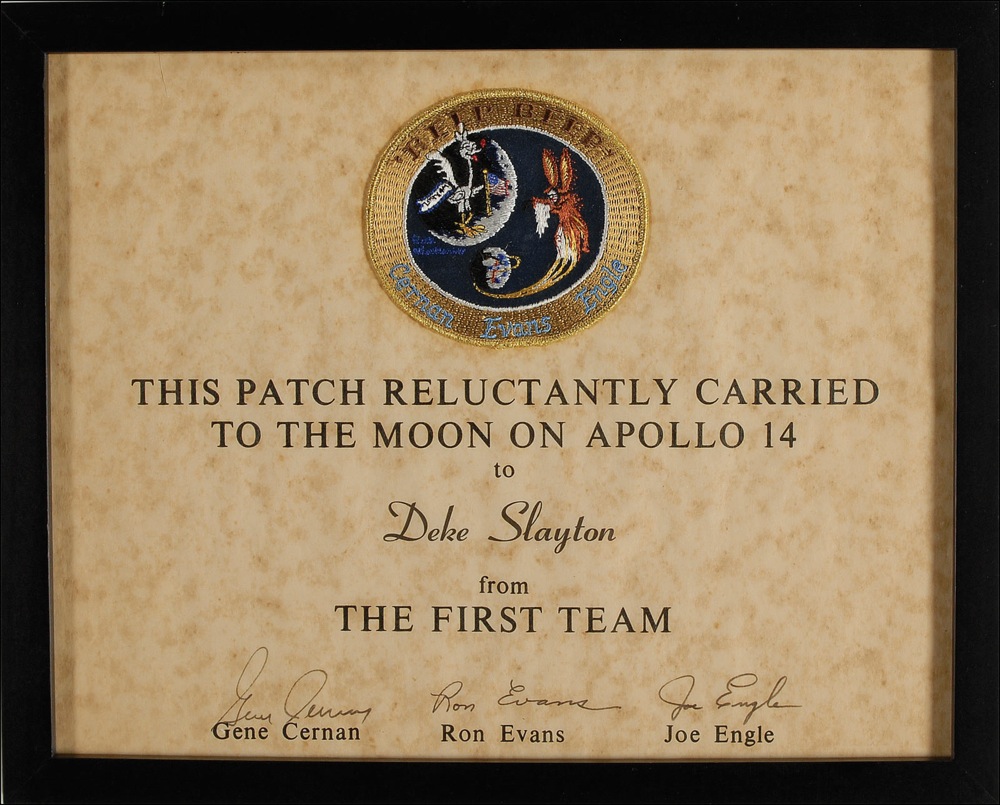 Flight-flown Apollo 14 back-up crew patch, 4 inches in diameter, placed aboard the Apollo 14 mission by back-up crew member Gene Cernan. Patch is a spoof of the actual Apollo 14 mission patch and depicts a gray-bearded Wile. E. Coyote, representing the Apollo 14 crew of Shepard, Roosa, and Mitchell, coming up from Earth only to find a Roadrunner, representing back-up ‘First Team’ crew members Gene Cernan, Ron Evans, and Joe Engle, already standing on the Moon, chirping his famous 'Beep-beep.’ Patch is affixed to a 13.5 x 10.5 presentation sheet which reads, “This patch was reluctantly carried to the moon on Apollo 14 to Deke Slayton from The First 'Team',” with autopen signatures of Cernan, Evans, and Engle at the bottom. Framed to an overall size of 15 x 12.

In his book, The Last Man on the Moon, Cernan describes the spoof his crew pulled on Shepard's prime crew: “’[Shepard] took our good-natured ribbing about his crew being tagged as the Three Rookies. Ron, Joe and I called ourselves the First Team, to infer that we were better than they were. Every flight has a personalized crew patch, and Apollo 14 was no different, except for one thing — we were the first and only backup crew to have a mission patch, too! This loony idea was a 'gotcha' on Al, for it depicted a gray-bearded Wile. E. 'Three Rookies' Coyote coming up from Earth only to find a 'First Team' Roadrunner already standing on the Moon, chirping his famous 'Beep-beep!' All the way to the Moon and back, even on the lunar surface, whenever the crew opened a box, bag or locker, out would float a First Team mission patch. Ron, Joe and I, as the backup crew, had final access to the spacecraft, and while we set the switches and checked the gauges, we also stuffed our Roadrunner patches into every nook and cranny, setting up a future mini-blizzard of ‘gotchas’ for the Three Rookies. Perhaps the most repeated phrase on the private radio loop during the flight of Apollo 14 was Shepard's annoyance when still another patch would suddenly appear. ‘Tell Cernan,’ he growled, ‘Beep-beep, his ass.’” A classic practical joke stashed throughout the Apollo 14 spacecraft, including the LM, annoyingly hiding in notebooks and lockers so that they would annoy and chide the crew. RRAuction COA.