“NO RENOWNED THEORETICAL PHYSICIST IS FALLING FOR THIS IDEA”: EINSTEIN pens an equation in patient response to a notorious rival’s flawed theory involving a “sphere wave” 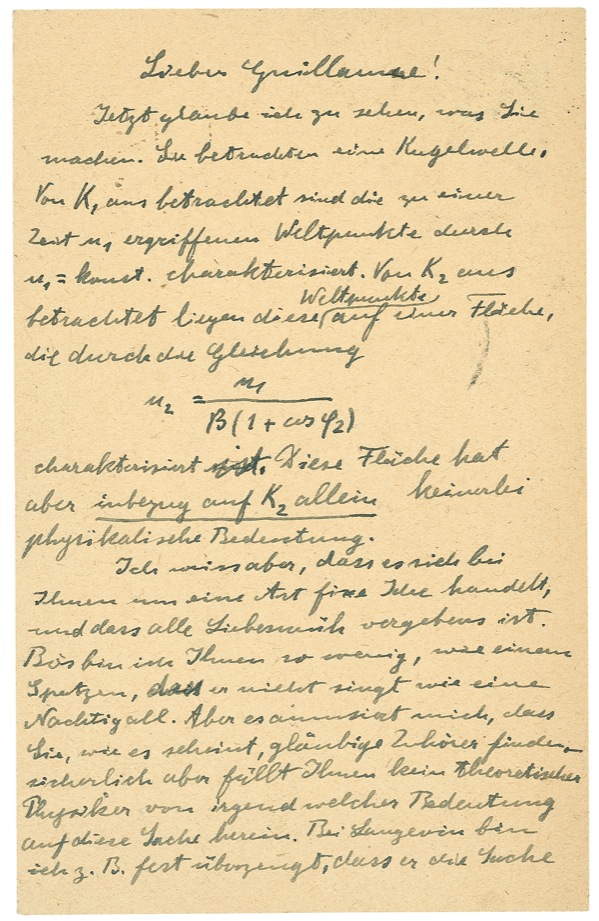 “NO RENOWNED THEORETICAL PHYSICIST IS FALLING FOR THIS IDEA”: EINSTEIN pens an equation in patient response to a notorious rival’s flawed theory involving a “sphere wave”

Significant ALS in German signed “A. Einstein,” on both sides of a 3.5 x 5.5 government postcard [postmark uncertain; likely December 20, 1929]. Einstein writes to Dr. E[douard] Guillaume in Bern, Switzerland. In part (translated; please note that some of the specialized mathematical symbols have been rendered as approximations): “Now I believe to see what you are doing. You are envisioning a sphere wave. Envisioned from K1, the world points established at time M1 are characterized by M1 = constant. Viewed from K2 these world points are positioned in an area characterized by the equation shown below                M2 =       M1                  ___________________                     ß (1 + ws[?] y2 )     This area, however, in relation to K2 alone has no physical bearing at all. I am fully aware, that for you this is sort of a fixed idea and that all well-intentioned effort to convince you otherwise is in vain. I am not angry at you, just as I am not angry at a sparrow because he does not sing like a nightingale. I am only amused that you, as it seems, find faithful listeners. I am certain, though, no renowned theoretical physicist is falling for this idea. I am, for instance, firmly convinced that Langevin [French physicist Paul Langevin, 1872–1946, a student of Pierre Curie and the originator of the “Langevin equation” describing Brownian motion] immediately would see through that. I cannot imagine that Grossman [Hungarian-Jewish mathematician Marcel Grossman, 1878–1936, Einstein’s friend and former classmate] would have anything against you. He is probably ashamed for the Swiss physicists that this issue is left unchallenged; one should not resent that. If I am asked, I can only speak my mind. And to you, I am saying nothing else but: Do as you are compelled to do.” Edouard Guillaume (1881–1955), a graduate of the Ecole Polytechnique in Bern, worked in the same patent office as Einstein. Though there is no record of the personal relationship between the two men, they were surely acquainted during this period. Between 1905 and 1909, when Einstein left the patent office to assume his first professorship, he gained international renown for his remarkable papers on the theory of specific heats, Brownian motion, the photoelectric effect, and especially relativity. This last subject seems to have particularly rankled Guillaume, and, beginning in 1913, he published a series of papers in the Archives des Sciences Physiques et Naturelles in which he argued for a Lorentzian electrodynamics that retained the concept of a universal time, in direct opposition to Einstein’s relativistic interpretation. As Einstein’s fame and the acceptance of his epochal theory grew, Guillaume become increasingly determined to convince the scientific community that it was misguided, even announcing at one scientific gathering that “I will destroy relativity.” Einstein initially disregarded Guillaume’s attacks on special relativity, as he was intensely occupied with the search for a more general theory to encompass gravitation. In 1917, however, after completing the general theory, he finally took notice of Guillaume, prompted by receipt from the Swiss Society of Physics of a reprinting of one of Guillaume’s papers on his interpretation of the Lorentz transformation. A few tiny, trivial postmark traces, otherwise very fine, clean, crisp condition. Einstein letters which include handwritten scientific formulae are particularly desirable. Auction LOA John Reznikoff/PSA/DNA and R&R COA.