BECOMING THE BEATLES: One of the earliest and finest letters of GEORGE HARRISON, complaining to former bandmate Stu Sutcliffe of a “murderous” workload, reporting on John’s blunt review of the Marcels, and proudly touting the success of the Fab Four’s first appearance on vinyl 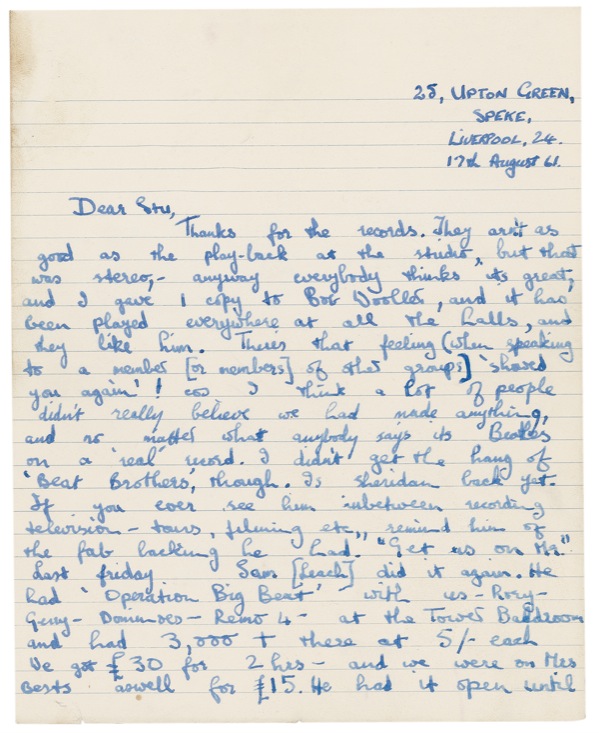 BECOMING THE BEATLES: One of the earliest and finest letters of GEORGE HARRISON, complaining to former bandmate Stu Sutcliffe of a “murderous” workload, reporting on John’s blunt review of the Marcels, and proudly touting the success of the Fab Four’s first appearance on vinyl

Extremely early ALS signed “George,” three pages, lightly-lined, 8 x 10, August 17, 1961. Letter written from Liverpool to his friend and former band mate, Stuart Sutcliffe, and originally acquired from Astrid Kirchner after the death of Sutcliffe. In full: “Thanks for the records. They aren’t as good as the play-back at the studio, but that was stereo, anyway everybody thinks it’s great and I gave 1 copy to Bob Wooler, and it has been played everywhere at all the halls and they like him. There’s that feeling (when speaking to a member [or members] of other groups) ‘showed you again’! cos I think a lot of people didn’t really believe we had made anything and no matter what anybody says it’s Beatles on a ‘real’ record. I didn’t get the hang of the ‘Beat Brothers,’ though. Is Sheridan back yet. If you ever see him in between recording television—tours, filming, etc., remind him of the fab backing he had.” On the Beatles’ first visit to Hamburg in 1960, they met rock and roller Tony Sheridan and became friends with him. On their second visit, now minus Sutcliffe, in April 1961, the Beatles backed Sheridan in a series of stage performances, under the name “Tony Sheridan and the Beat Brothers.” The Beat Brothers’ lineup was notoriously nebulous, and among the various musicians who briefly passed through the ranks were John Lennon, Paul McCartney, George Harrison, and Pete Best. It was this early incarnation of the Beatles that backed Sheridan in mid-1961 on at least three tracks: “My Bonnie,” “The Saints,” and “Why (Can’t You Love Me Again).” Much of the information on the sessions remains murky, based on memory and conjecture; the true and complete circumstances will likely never be determined, though it is also widely agreed that the same date generated “Ain’t She Sweet” (sung by Lennon) and the instrumental “Cry for a Shadow.”) Harrison continues: “‘Get us on M9.’ Last Friday, Sam [Leach] did it again. He had ‘Operation Big Beat’ with us—Rory—Gerry—Dominoes—Remo 4—at the Tower Ballroom and had 3,000 + there at 5/- each. We got £30 for 2 hrs—and we were on His Bests as well for £15. He had it open until 1 AM with 2 bars until 11-30. Now he has ‘operation big beat II’ only 6/- a go, open until 2 AM and 3 bars until 12-45. I think he will overdo the novelty on the next one or when he charges 30/- a ticket with 250 bars open until 10 AM. That’s just like Sam. I always remember him saying ‘I’ve got 10 groups booked for Friday, and no hall to put them on!’ He made a fortune though and has invited us—Gerry & group & Rory & Hurry’s to tea on Sunday. We are booked up every night except Monday now—it’s murder. I’m running around trying to cancel them. [I like going to the pictures instead of playing!] We saw Alan Williams and he said he saw you in the Fair, also Bonny is on every jukebox in Hamburg. Have you seen the German Top 20. Is it in yet? Has our photo come in any magazines? If it has send a few hundred. Can you send another 20 My Bonnies I think £5 should be enough. If it is not, then send as many as you can get for £5.” “My Bonnie” sold some 100,000 copies and reached the West German Top Five; it was credited to Tony Sheridan and the Beat Brothers as a result of label fears that “Beatles” bore too much similarity to the German “peedles,” slang for the male organ. Harrison goes on: “How many marks in £1, as everyone is going 4 records for a £1, and even though I got 2 for 10/- I’ve got that feeling that someone isn’t going to get 12 Mrs. Best. Could you write how many records you get each for £1 as it will save me a lot of messing. How is your appendicitis!! Are you ever going to have them done, if it is not too personal a thing to ask? I’ve got a drum-kit now, only cheap ones but O.K. for messing around on. I’m looking for some record[s] that you might like. There is a Marcels out but I haven’t heard it yet. John said it’s crap. Bob Woller has started calling John the ‘Singing Rage,’ and it’s catching on. Quite a good name. Do you remember a group called the Ravens with a midget hunchback. Well they have kicked someone out, and it is now Faron & the Flamingoes. Remember George Spruce or Gene Day who sang with Django Beas. Well they kicked him out a while back and he is with the Farons old group Earl Preston and the T. Ts. [Tempest Tornadoes]. They are bringing them in, like we used to in the old days! Anyway tarararara Stu, I hope you and Astrid are both well, I feel ill, don’t forget the records, and I think we may pop to Hamburg January or Feb, but we will wait until the people are shouting us off every night first.” This letter is reproduced on pages 132 and 133 of Hamburg Days by Astrid Kirchherr and Klaus Voormann. In fine condition, with intersecting mailing folds and a bit of trivial edge toning. The extremely early date, Harrison’s colorful view of the Merseybeat scene and multiple references to the Beatles’ fabled debut on vinyl, and the highly significant recipient grant the present item status as nothing less than one of the finest Beatles letters extant! COA Roger Epperson/REAL and R&R COA.