HOME RUNS IN THE HEARTLAND: In the Yankees’ magical year of 1927, RUTH, GEHRIG, and promoter WALSH sign a photo during their famous “barnstorming” tour 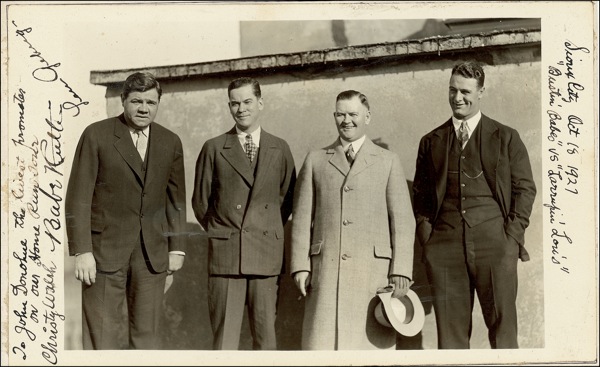 HOME RUNS IN THE HEARTLAND: In the Yankees’ magical year of 1927, RUTH, GEHRIG, and promoter WALSH sign a photo during their famous “barnstorming” tour

Amazing vintage glossy 8 x 5 photo of Babe Ruth, Lou Gehrig, Christy Walsh and J. J. Donahue posing together outside the Hotel Martin shortly after their arrival in Sioux City, signed in fountain pen “Babe Ruth,” and “Lou Gehrig,” and signed and inscribed in the left border in fountain pen, “To John Donahue, the liveliest promoter on our home run tour, Christy Walsh.” Notation in right border reads, “Sioux City, Oct. 18, 1927, ‘Bustin’ Babes’ vs. ‘Larrupin Lou’s.” John J. Donahue was a personal friend of Babe Ruth’s and was instrumental in bringing the exhibition game to Sioux City, Iowa in 1927. This wonderful photo is accompanied by prints of five photos taken that afternoon, showing Ruth and Gehrig posing with Donahue’s son and horse, including one of Ruth atop the horse, an original photo of Gehrig holding Kenneth Donahue, while wearing the young boy’s cowboy hat, and photocopies of two newspaper photos from Ruth and Gehrig’s visit to Sioux City. Also included is a DVD featuring two news reports: one about Mrs. Donahue’s 100th birthday, showing home movies of Ruth and Gehrig’s visit to her home, the other about baseball in Sioux City throughout history, again featuring home footage of the visit. Also on the DVD is approximately an hour’s worth of home movies of the Donahues, with all the footage of their memorable October afternoon visit. In very good condition, with some scattered light silvering, several creases, wrinkling from being affixed to a slightly larger sheet, and a couple words of Walsh’s inscription light, but legible. Following the 1927 season, Ruth and Gehrig embarked on their famous two-team barnstorming tour. A largely profitable trip, it is said that Lou Gehrig earned more on the barnstorming trip than he made while playing for the Yankees. Unfortunately, the trip would also be the beginning of the end for the friendship between the two most feared hitters in the Majors. Christy Walsh, Ruth’s agent and business manager, organized The Bustin’ Babes and The Larrupin’ Lous tour that stretched from Providence, Rhode Island to San Diego, California. Walsh cleverly rekindled the home-run rivalry by offering a “Copper Cup” trophy to the one with the most home runs at the tour’s end. In all, they played 21 games in just three weeks, covering nearly 8,000 miles over nine states. Although Walsh estimated they drew in excess of 220,000 fans, a compilation from the local newspapers puts the attendance figure closer to 175,000 In early November, Babe and Lou returned to New York where they relaxed for the winter. There would be future barnstorming trips, including another Bustin’ Babes and Larrupin’ Lous tour the following fall that took them to the Orient. But none compared with the 1927 tour, which showcased two of baseball’s greatest sluggers during their prime. Auction LOA Steve Grad/PSA/DNA and R&R COA.