Minneapolis’s resident ‘Rock and Roll Renaissance Man,’ Tony ‘Little Sun’ Glover (1939–2019) honed his talents as a musician, writer, and critic in the Twin Cities. A renowned harmonica player, he formed one third of Koerner, Ray & Glover, an influential blues trio during the early 1960s folk/blues revival that included ‘Spider’ John Koerner and Dave ‘Snaker’ Ray. Glover befriended Bob Dylan in the Minneapolis coffeehouse scene where they would on occasion share the same stage. It was in the Dinkytown district that Glover made some of the earliest recordings of Dylan, at intimate ‘venues’ like Bonnie Beecher’s apartment. He was one of the few hometown friends that Dylan stayed in touch with after going to NYC, and Dylan dedicated his prose-poem contribution to the 1963 Newport Folk Festival program to Glover, calling him a ‘best friend in the highest form.’

Glover has shared the stage with Jim Morrison and the Doors, the Allman Brothers at Carnegie Hall, Patti Smith, Lucinda Williams and the Replacements, among others. Glover has been inducted into the Minnesota Blues Society Hall of Fame multiple times, and Koerner, Ray & Glover has been recognized with a star outside of the First Avenue nightclub in Minneapolis—a prestigious local honor. Bob Dylan wrote of Glover in his 2004 memoir Chronicles, Volume One: ‘I couldn’t play like Glover or anything and I didn’t try to. I played mostly like Woody Guthrie and that was about it. Glover’s playing was well known and talked about around town, but nobody commented on mine.’

In addition to his work as a musician, Tony Glover was an experienced music journalist and critic who contributed to the ‘Little Sandy Review’ folk zine; crafted reviews and conducted interviews for Rolling Stone, Circus, Creem, and other media outlets; co-authored the only biography of the great blues musician Little Walter; created several influential blues harp songbooks; and wrote liner notes for various projects, including An Anthology by Duane Allman and the two-disc live album The Bootleg Series Vol. 4: Bob Dylan Live 1966, The ‘Royal Albert Hall’ Concert. For the Dylan liner notes, Glover was honored with the prestigious Deems Taylor Award, which is comparable to the Pulitzer Prize for Music Writing. Glover’s wide-ranging talents and interests led him to connect with countless famous musicians and artists, often being pulled into their orbit—sometimes as an observer, other times as a participant.

Glover was also a prolific collector, retaining an impressive variety of ephemera and artifacts from the realms in which he worked. His collection includes correspondence with Bob Dylan, Joan Baez, Donovan, and Pete Seeger; transcripts of an unpublished 1971 interview with Dylan, hand-edited by Dylan himself; early Dylan posters and programs; original photography; audio tape recordings of interviews with Dylan, Jimi Hendrix, Robbie Robertson, and the Allman Brothers; an eclectic personal vinyl collection of over 2,400 records; and much more. His collection spans the beginning and substance of many of our most treasured icons’ careers. 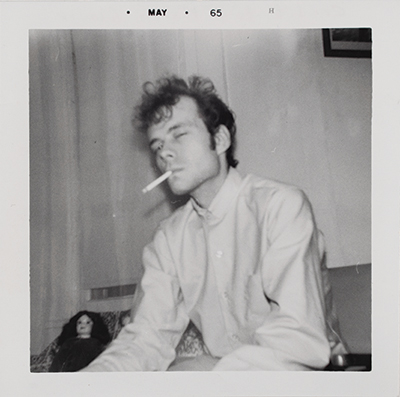