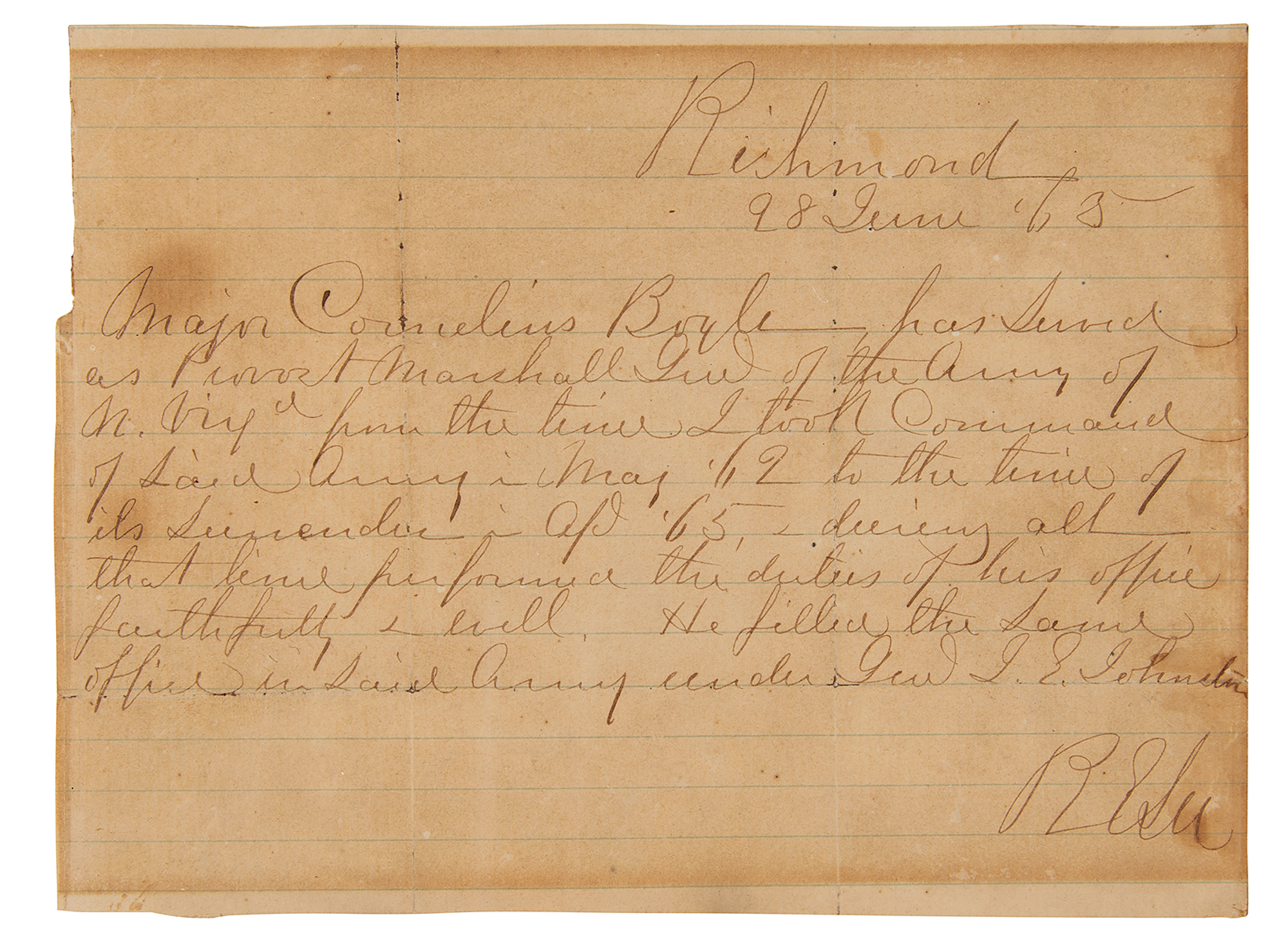 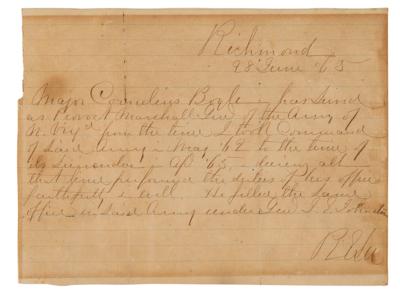 Spectacular ALS signed “R. E. Lee,” one page, 7.75 x 5.75, June 28, 1865. Addressed from Richmond, Lee pens a handwritten letter of commendation two-and-a-half months after his surrender to Grant. In full: “Major Cornelius Boyle has served as Provost Marshal Genl. of the Army of N. Virg. From the time I took command of said army in May '62 to the time of its surrender in Apr. '65, during all that time performed the duties of his office faithfully & well. He filled the same office in said Army under Genl. J.E. Johnston.” In very good to fine condition, with some light staining, and toning from prior display.

Prior to the surrender, the Confederate espionage organization in Washington was prepared to continue to support the Army of Northern Virginia in its campaign of 1865. Because Lee planned to leave Richmond and revert to a war of maneuver the secret communication lines from Washington to the organization's two main customers would be much longer and harder to keep in operation. But Mosby, Major Cornelius Boyle, and the Confederate Signal Corps' Secret Line all remained outside the area of Union control and prepared to carry out their responsibilities. Thus, they were in place and prepared to assist the Confederate cause when Booth fled Washington after the assassination of Lincoln.

On April 9, Lee sent a message to Grant announcing his willingness to surrender. The two generals met in the parlor of the Wilmer McLean home at one o’clock in the afternoon.

Characteristically, Grant arrived in his muddy field uniform while Lee had turned out in full dress attire, complete with sash and sword. Lee asked for the terms, and Grant hurriedly wrote them out. All officers and men were to be pardoned, and they would be sent home with their private property, and most importantly, the horses, which could be used for a late spring planting. Officers would keep their side arms, and Lee’s starving men would be given Union rations.

However, several Confederate spies were not allowed access to their private homes. Boyle was denied entry into the city of Washington and was not able to regain possession of his confiscated land due to his espionage activities during the war. His family lost everything after the war, and this letter of commendation from General Robert E. Lee may have been for the purpose of reestablishing himself professionally.