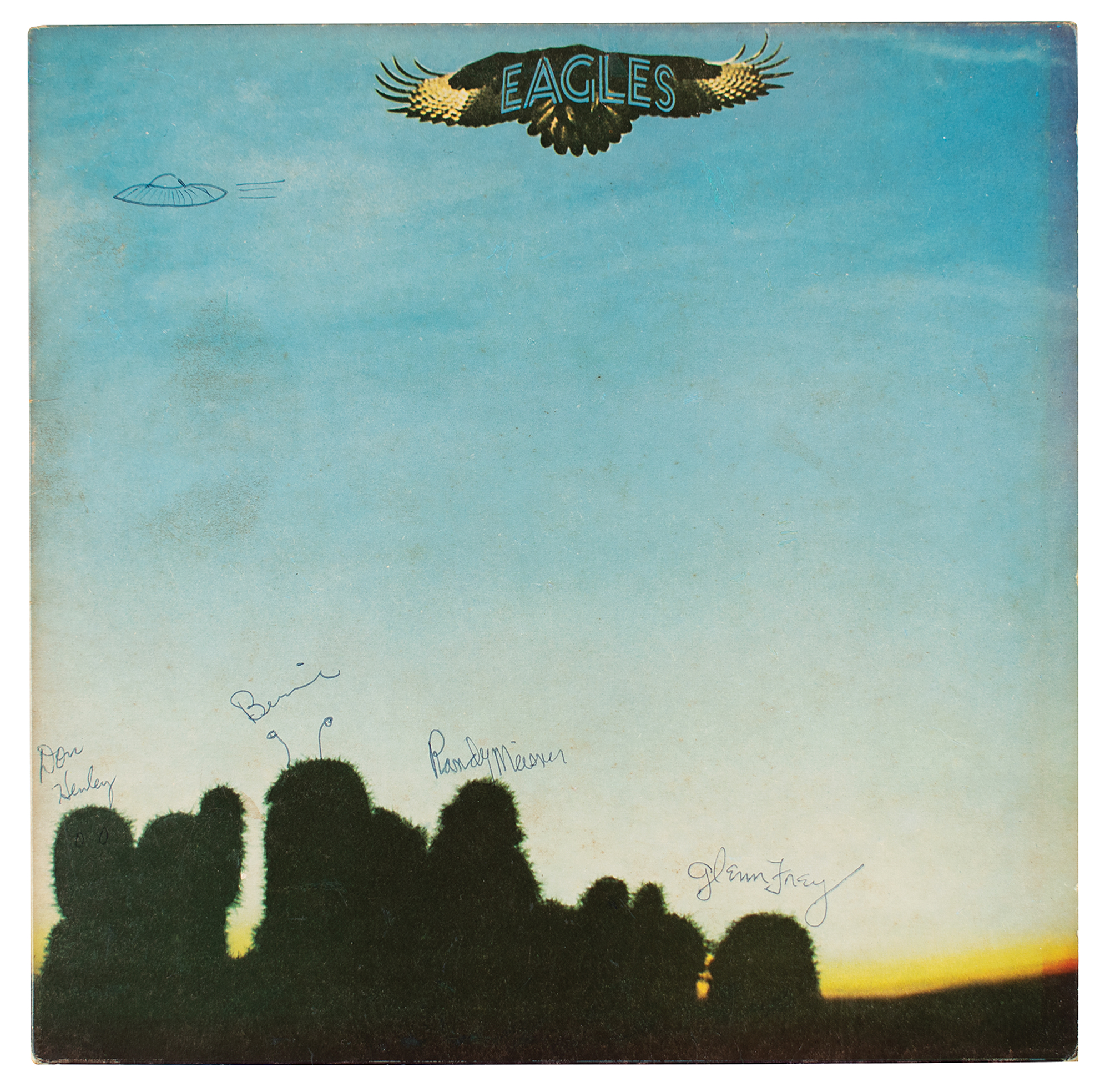 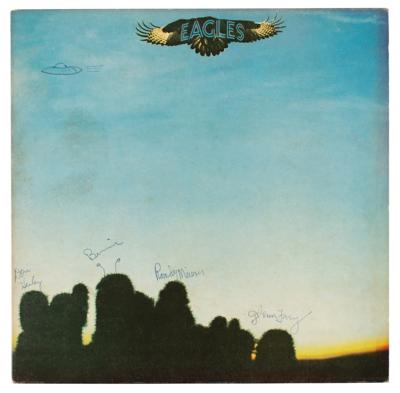 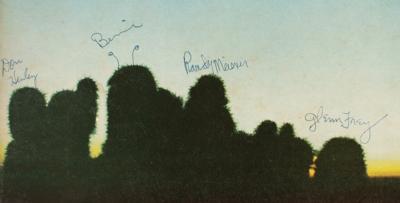 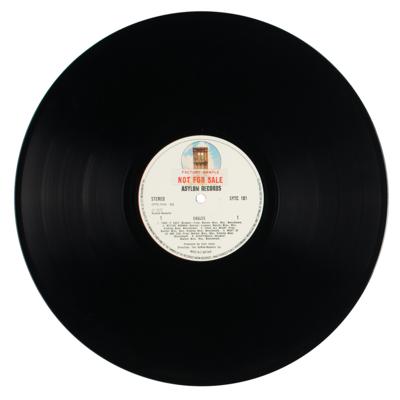 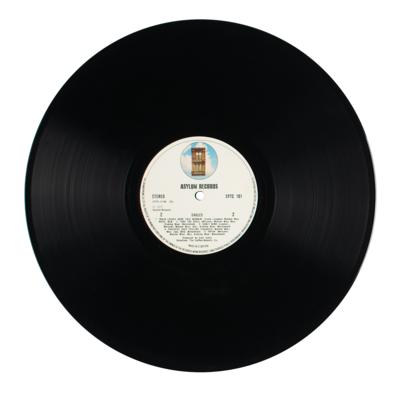 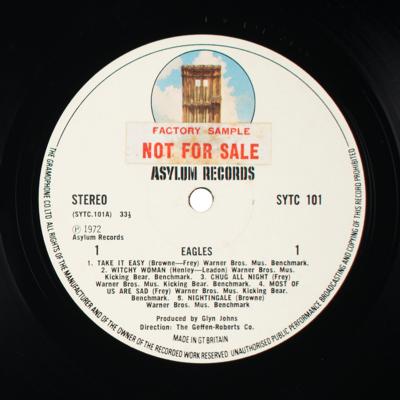 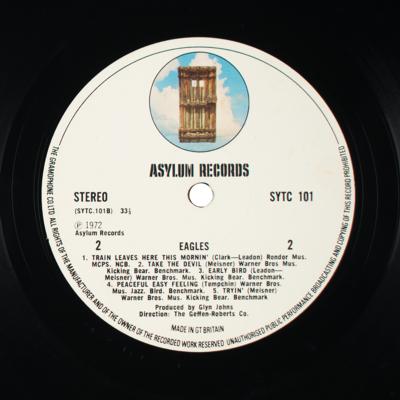 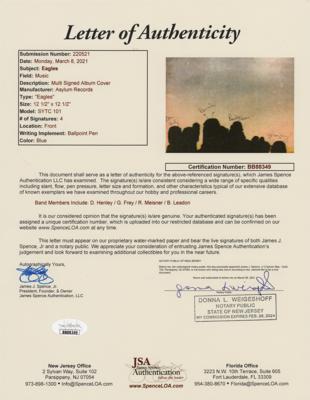 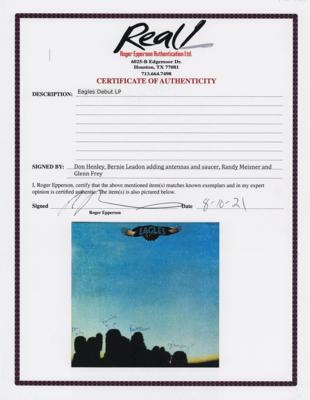 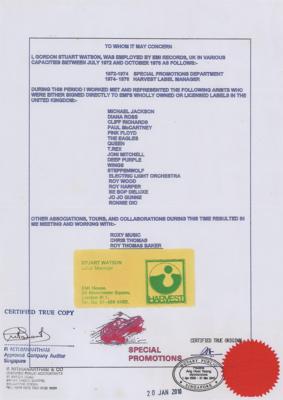 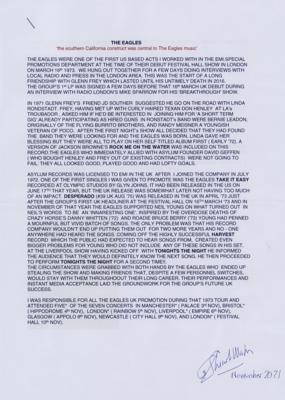 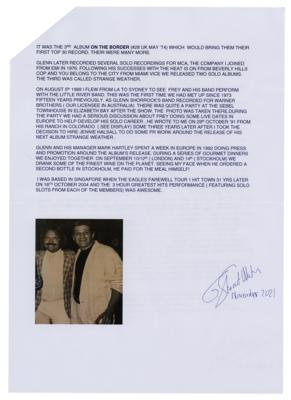 Extraordinary first UK promotional pressing of the Eagles’ 1972 self-titled debut album, signed beautifully in ballpoint by all four original bandmembers: Don Henley, Glenn Frey, Randy Meisner, and Bernie Leadon, who adds two ‘Martian-like’ antennae to a cactus below his name, along with a flying saucer in the sky above. Includes the original UK Asylum Records white label disc with an affixed “Factory Sample, Not For Sale” sticker. In fine condition.

Accompanied by full letters of authenticity from JSA and REAL, and a detailed letter of provenance from the original recipient, Stuart Watson, a former EMI Records executive, which reads, in part: “The Eagles were one of the first US-based acts I worked with in the EMI Special Promotions Department at the time of their debut Festival Hall show in London on March 16, 1973. We hung out together for a few days doing interviews with local radio and press in the London area. This was the start of a long friendship with Glenn Frey which lasted until his untimely death in 2016. The group’s 1st LP was signed a few days before that 16th March UK debut during an interview with Radio London’s Mike Sparrow for his ‘Breakthrough’ Show.”

In 1971, the Eagles had just formed and were signed by David Geffen, who promptly sent the four musicians to Aspen, Colorado, to develop as a band. It was during this time, that many of the songs appearing on this debut were developed. Glenn Frey requested that Glyn Johns produce the album, with Johns traveling to Colorado to hear the band perform. Although, not originally impressed, upon hearing the band harmonize at a rehearsal later in Los Angeles, Johns agreed, and the band traveled to London’s Olympic Studios to record.

The album was an instant success and played a major role in popularizing the country-rock sound thanks to classic songs like ‘Take It Easy,’ ‘Witchy Woman,’ and ‘Peaceful Easy Feeling.’ Today, the Eagles’ debut is critically acclaimed and widely considered one of their greatest albums. Authentically signed Eagles albums are exceedingly rare, but this example is in a league by itself—a promo copy of their debut album signed shortly after its release for an EMI Records executive. This is arguably the earliest and single-most important signed Eagles album in existence. A true museum-quality piece.