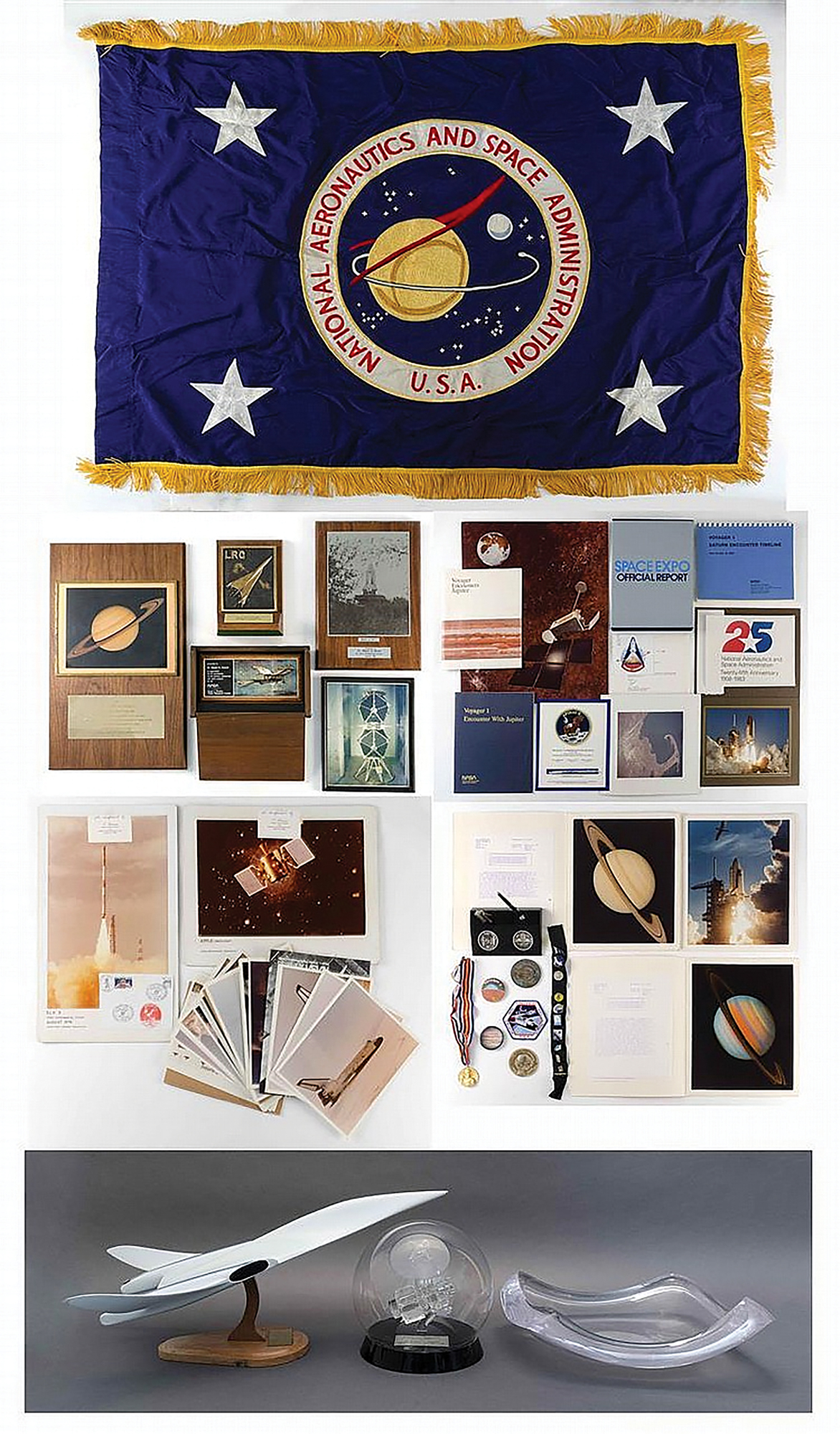 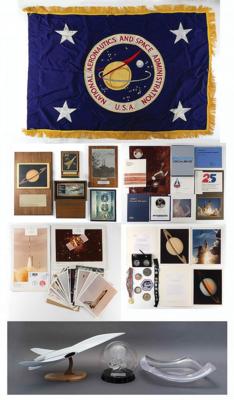 American scientist (1928-2020) who served as the fifth administrator of NASA. Fascinating archive from the personal collection of Robert A. Frosch, the fifth administrator of NASA from 1977 to 1981. Appointed by President Jimmy Carter, Frosch was instrumental in furthering the development of the Voyager program and its two probes, and the Space Shuttle program and the testing of its first orbiter, the Enterprise. When Carter left the White House on January 20, 1981, Frosch also left his administrative post at NASA, just shy of three months before the maiden launch of the STS-1 mission. Many of the items offered in this unique archive are specialized awards commemorating Frosch’s significant four-year tenure. The items are as follows:

A “Veterans of Foreign Wars of the United States Space Award,” gilt bronze, 2″ in diameter, with the front featuring a raised image of an astronaut with rocket, planets, and an elliptical path; and the reverse engraved: “Robert A. Frosch.” The front bears the artist's name, Abram Belskie, and the edge is marked “1980 MACO—Bronze Gold Plated.” Includes the original multi-colored ribbon with snap closure.

Rare contractor model of an early prototype of a lifting body aircraft, 23″ x 13″, mounted to a height of 9.5″ atop a wooden base with affixed presentation plaque: “Best wishes to Dr. Robert A. Frosch, From your colleagues in the Office of Aeronautics and Space Technology, NASA, January 20, 1981.”

Rare and highly desirable Annin Federal Artglo flag of the official seal of NASA, 52″ x 39″, woven of 100% Bemberg rayon and finished with gold fringe, with each corner exhibiting a large five-pointed star.

A stunning ‘crystal ball’ award from the Goddard Space Flight Center, 8″ in diameter, presented “In appreciation to Dr. Robert A. Frosch, NASA Administrator 1977-1981.” The interior of the sphere contains a lovely carved crystal rendering of a NASA satellite.

An unusual Plexiglas centerpiece bowl, 15″ x 5″ x 12″, made from the window of an unspecified spacecraft.

A rare NASA wooden box display, 11″ x 2.5″ x 6.5″, containing an award plaque with an artistic 3D rendering of Leonardo da Vinci’s ornithopter, signed in the lower left, “R. E. Bell,” with text reading: “Presented to Dr. Robert A. Frosch, In appreciation for his contributions to this country’s aeronautical and space progress by the NASA Hugh L. Dryden Flight Research Center.”

A Marshall Space Flight Center award in the shape of a pen stand with a mounted Space Shuttle, featuring two inlaid medallions, one of which reads: “Presented to Robert A. Frosch, January 14, 1981, in recognition of outstanding contributions to the National Space Program”; includes the original pen.

A 10″ x 14″ wooden plaque with a central metallic image of the Space Shuttle Columbia, with plates below reading: “Rollout of STS-1” and “Presented to Dr. Robert A. Frosch, By John F. Kennedy Space Center, January 1981.”

A Space Shuttle presentation package consisting of a STS-1 decal, a group of 20 official color NASA photos from the STS-1 mission (includes original presentation folder and mailing envelope), and a TLS from Deputy Associate Administrator Ann P. Bradley, dated April 20, 1981, which reads: “I wanted you to have some of the first pictures of the Shuttle launch and landing. It was a special pleasure for me to be able to share this experience with you.”

A Manned Flight Awareness medallion honoring the STS-1 mission, 1.5″ in diameter, with front showing the raised mission insignia with facsimile signatures of John Young and Bob Crippen and the date "April 1981," and the reverse stating: "Thank you for your contribution toward making the world's first orbital flight of the Space Shuttle STS 1 possible. We would like you to have this memento made, in part, of metal taken from the Columbia."

A robust “LRC” [Langley Research Center] plaque with NASA plate and wooden base.

Three oversized official color 11 x 14 NASA photos, with images of the STS-1 launch and Voyager 1 shots of Saturn, presented in their original folder, each bearing “This Paper Manufactured by Kodak” watermarks on the reverse. Includes a smaller mounted NASA aerial photo of Cape Cod.

Other items include: Voyager 1 and 2 pins; a group of 11 Soviet space pins; a Pioneer / Venus ‘78 medallion / paperweight; and a STS-6 mission patch. In overall fine condition, with scattered wear and scuffs to awards, medals, and model.