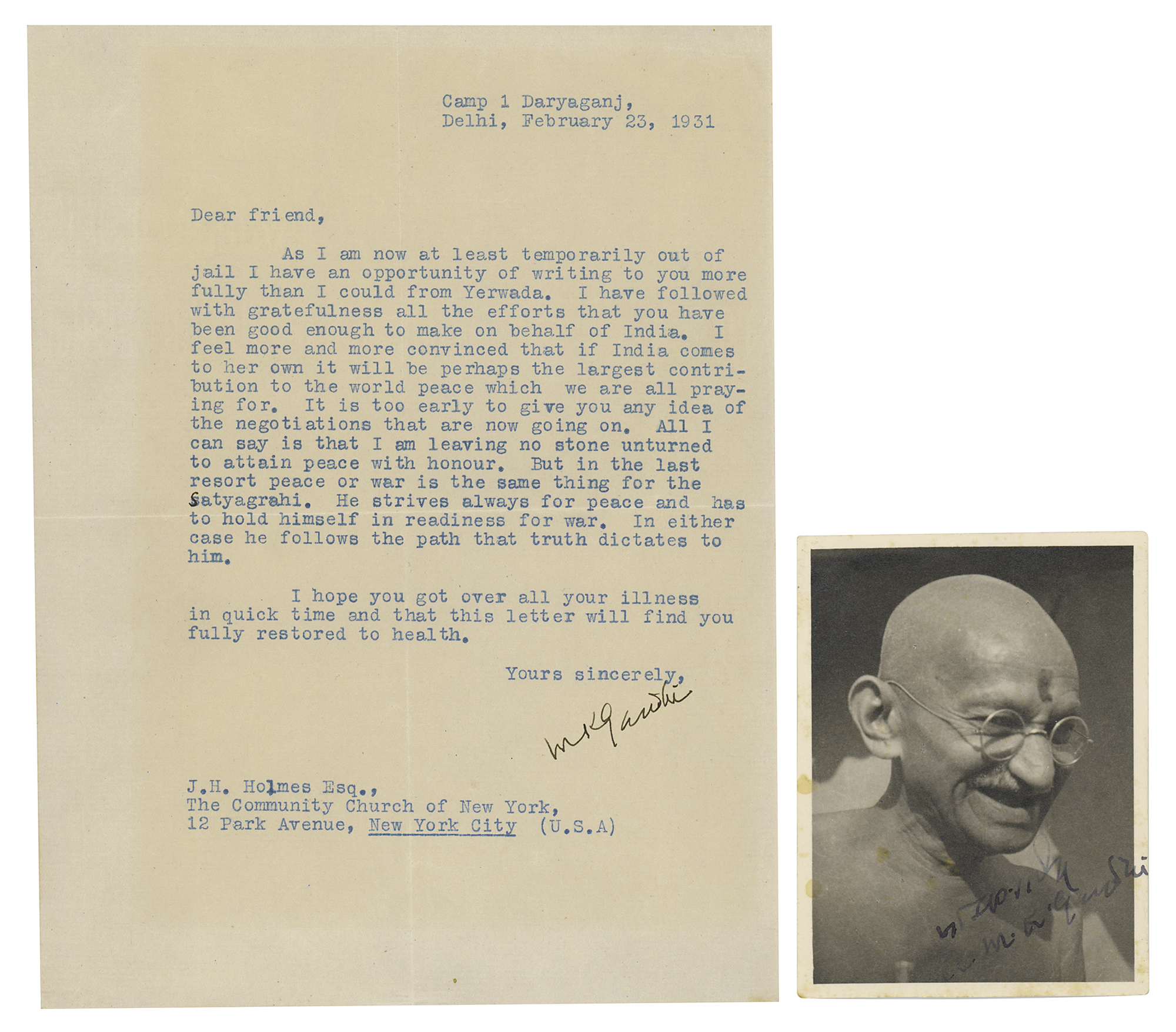 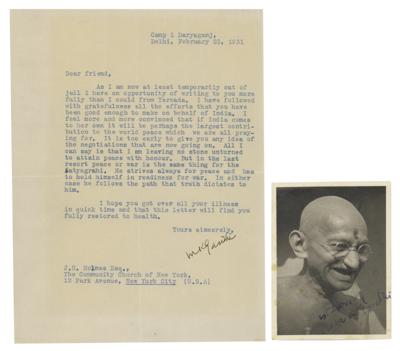 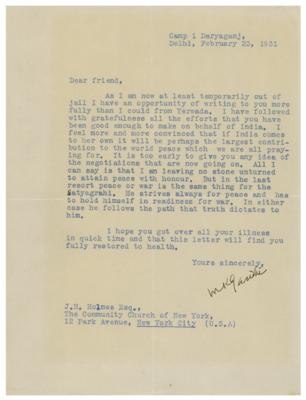 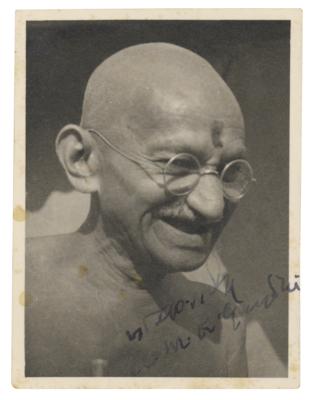 Important pairing of a TLS by Gandhi discussing the meaning of 'Satyagraha,' and a rare twice-signed candid portrait taken by his grandnephew:

1. Revelatory TLS signed "M. K. Gandhi," one page, 6.5 x 8.75, February 23, 1931. Letter to J. H. Holmes of the Community Church of New York, discussing the meaning of 'Satyagraha,' the guiding principle of his philosophy. In part: "As I am now at least temporarily out of jail I have an opportunity of writing to you more fully than I could from Yerwada. I have followed with gratefulness all the efforts that you have been good enough to make on behalf of India. I feel more and more convinced that if India comes to her own it will be perhaps the largest contribution to the world peace which we are all praying for. It is too early to give you any idea of the negotiations that are now going on. All I can say is that I am leaving no stone unturned to attain peace with honour. But in the last resort peace or war is the same thing for the Satyagrahi. He strives always for peace and has to hold himself in readiness for war. In either case he follows the path that truth dictates to him." In fine condition, with light toning to the letter from prior display. Accompanied by an original Planet News press photo of Gandhi, stamp-dated August 22, 1931, showing him preparing to attend the resumed Round Table Conference.

This extraordinary letter was written during the first sessions of talks between Gandhi and Viceroy Irwin, which began in London on February 17, 1937. After three weeks of discussion, the Gandhi-Irwin Pact was signed, putting in place a set of agreements that began to lessen England's harsh repression of Indian nationalism. The letter offers insight into one of the most misunderstood-and to this day misrepresented-explanations of Gandhi's guiding philosophy of 'Satyagraha,' acknowledging that its definition encompassed "war" and struggle, rather than the commonly held notion of it being constrained to passive resistance and civil disobedience. In Erik H. Erikson's study Gandhi's Truth, he observes that 'for quite some time, Gandhi continued to use what was easily the most unsuitable rendition of his term Satyagraha in English, namely, 'passive resistance.' The dilemma between passivity and resistance has never been resolved,' and thus Gandhi's statements in this letter are of the utmost interest. While Gandhi letters with a passing references to the 'Satyagraha' concept occasionally appear at auction, this letter is the only one we have ever encountered explicitly defining the crucial term.

Gandhi's grandnephew Kanu acted as the Mahatma's official photographer from 1938 to 1948, living with his family on Gandhi's ashram. Kanu was permitted to photograph Gandhi under three conditions: he was not to use flash, the ashram would not finance it, and Gandhi would never pose. This photograph was taken in January 1942 as Gandhi was receiving a coconut in front of his hut at Satyagraha Ashram, Sevagram, India. The spontaneous nature he promoted is readily apparent in this marvelous image. Signed photographs of Gandhi are rare and those taken and signed by his grandnephew are of the utmost desirability; this is the only such example we have seen.