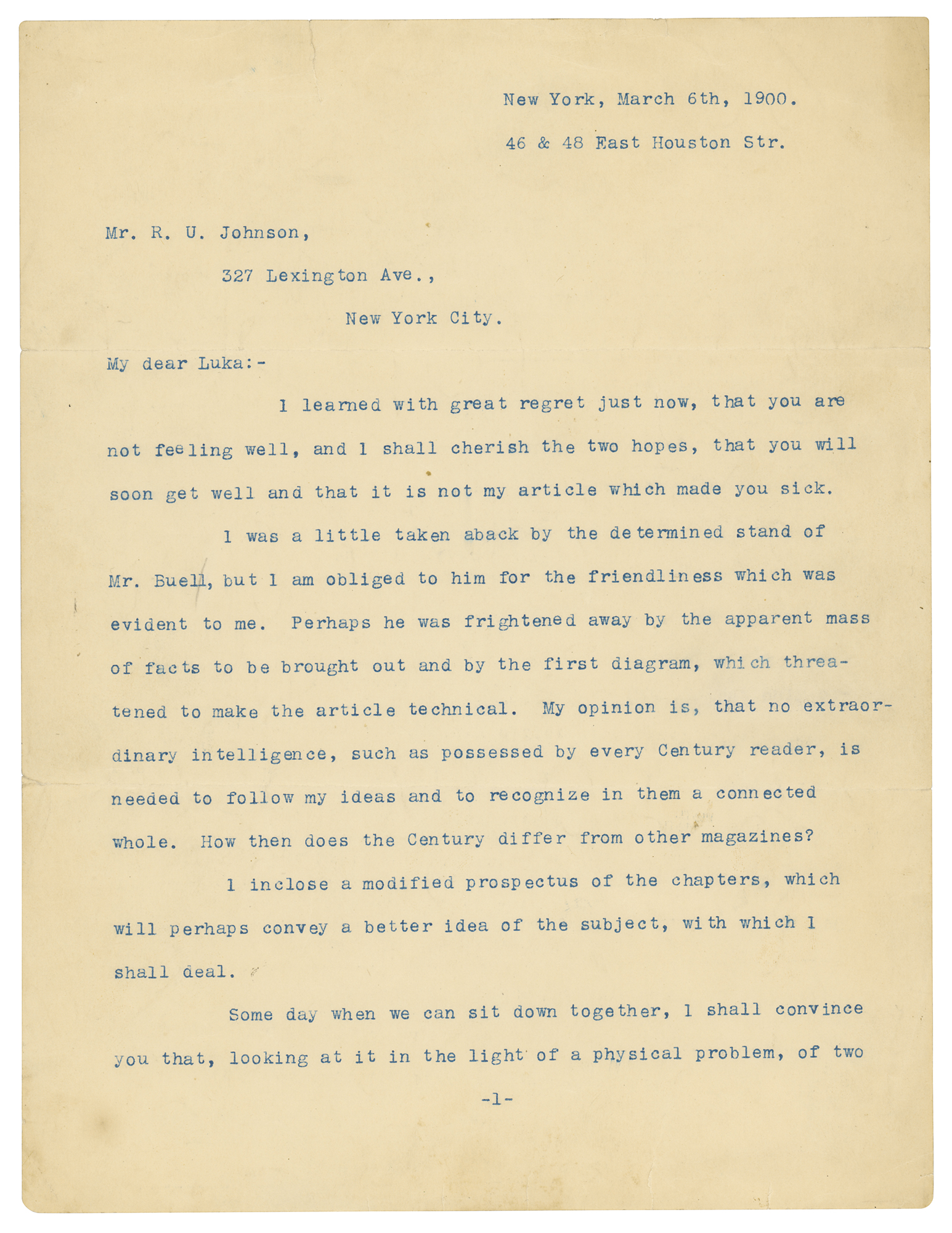 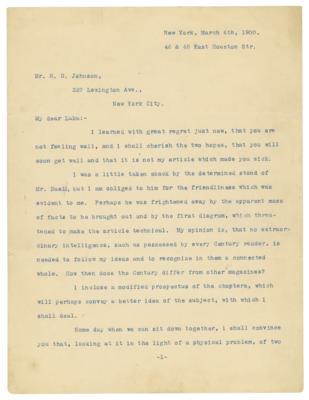 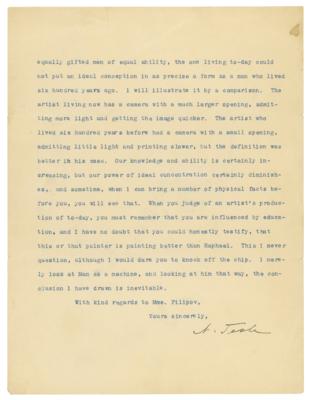 TLS signed “N. Tesla,” two pages, 8 x 10.5, March 6, 1900. Letter to Robert Underwood Johnson, editor of The Century Magazine. In part: "I learned with great regret just now, that you are not feeling well, and I shall cherish the two hopes, that you will soon get well and that it is not my article which made you sick. I was a little taken aback by the determined stand of Mr. Buell, but I am obliged to him for the friendliness which was evident to me. Perhaps he was frightened away by the apparent mass of facts to be brought out and by the first diagram, which threatened to make the article technical. My opinion is, that no extraordinary intelligence, such as possessed by every Century reader, is needed to follow my ideas and to recognize in them a connected whole. How then does the Century differ from other magazines? I inclose a modified prospectus of the chapters, which will perhaps convey a better idea of the subject, with which I shall deal. Some day when we can sit down together, I shall convince you that, looking at it in the light of a physical problem, of two equally gifted men of equal ability, the one living to-day could not put an ideal conception in as precise a form as a man who lived six hundred years ago. I will illustrate it by a comparison. The artist living now has a camera with a much larger opening, admitting more light and getting the image quicker. The artist who lived six hundred years before had a camera with a small opening, admitting little light and printing slower, but the definition was better in his case. Our knowledge and ability is certainly increasing, but our power of ideal concentration certainly diminishes, and sometime, when I can bring a number of physical facts before you, you will see that. When you judge of an artist's production of to-day, you must remember that you are influenced by education, and I have no doubt that you could honestly testify, that this or that painter is painting better than Raphael. This I never question, although I would date you to knock off the chip. I merely look at Man as a machine, and looking at him that way, the conclusion I have drawn is inevitable." In fine condition, with light creasing, a short tear to the top edge of each page, and a small stain to the second page.

Tesla wrote this letter amidst some conflict over an article he was writing for The Century, which would appear in the June issue under the title 'The Problem of Increasing Human Energy, with Special Reference to the Harnessing of the Sun's Energy.' His strange, rambling drafts covered everything from advice on human hygiene to advances in wireless communications. Underwood encouraged him to refine the piece, noting that it was an opportunity to make a good impression upon the public. In Tesla's final submission—which Underwood praised as a 'vast improvement'—he focused on problems of renewable energy, discussing the possibility of generating electricity from the sun, wind, and geothermal resources. The article, and this correspondence, is discussed in Chapter 11 of Richard Munson's Tesla: Inventor of the Modern.