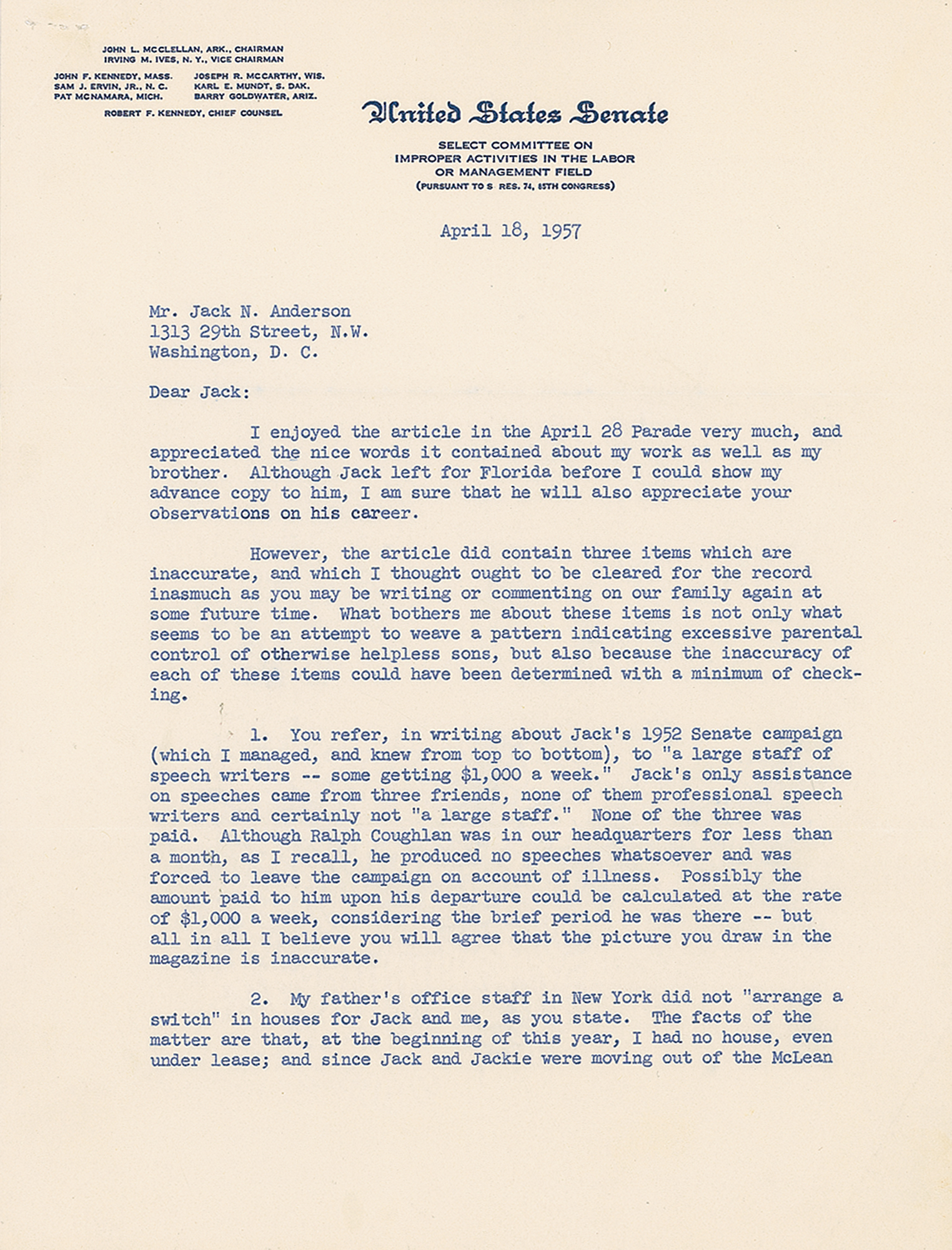 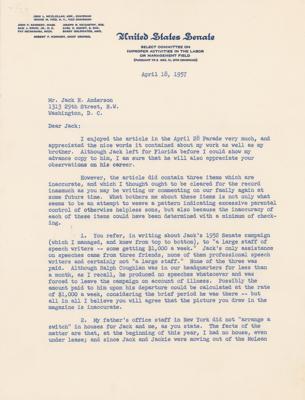 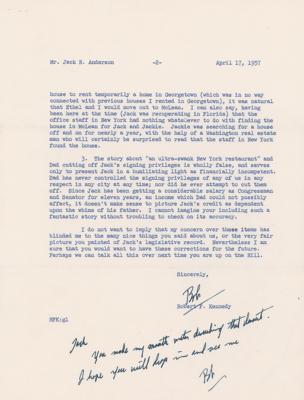 TLS twice signed "Bob," with handwritten postscript, two pages, 8 x 10.5, United States Senate letterhead, April 18, 1957. A wonderful letter to journalist Jack Anderson, Washington Bureau Chief of Parade Magazine, considered by many to be the 'father of modern investigative journalism.' In part: "I enjoyed the article in the April 28 Parade very much, and appreciated the nice words it contained about my work as well as my brother. Although Jack left for Florida before I could show my advance copy to him, I am sure that he will also appreciate your observations on his career. However, the article did contain three items which are inaccurate, and which I thought ought to be cleared for the record inasmuch as you may be writing or commenting on our family again at some future time.What bothers me about these items is not only what seems to be an attempt to weave a pattern indicating excessive parental control of otherwise helpless sons, but also because the inaccuracy of each of these items could have been determined with a minimum of checking…in writing about Jack's 1952 Senate campaign (which I managed, and knew from top to bottom), to 'a large staff of speech writers-some getting $1,000 a week.' Jack's only assistance on speeches came from three friends, none of them professional speech writers and certainly not 'a large staff.' None of the three was paid…My father's office staff in New York did not 'arrange a switch' in houses for Jack and me, as you state. The facts of the matter are that, at the beginning of this year, I had no house, even under lease; and since Jack and Jackie were moving out of the McLean house to rent temporarily a home in Georgetown (which was in no way connected with previous houses I rented in Georgetown), it was natural that Ethel and I would move out to McLean…The story about 'an ultra-swank New York restaurant' and Dad cutting off Jack's signing privileges is wholly false, and serves only to present Jack in a humiliating light as financially incompetent.Dad has never controlled the signing privileges of any of us in any respect in any city at any time; nor did he ever attempt to cut them off.Since Jack has been getting a considerable salary as Congressman and Senator for eleven years, an income which Dad could not possibly affect, it doesn't make sense to picture Jack's credit as dependent upon the whims of his father. I cannot imagine your including such a fantastic story without troubling to check on its accuracy. I do not want to imply that my concern over these items has blinded me to the many nice things you said about us, or the very fair picture you painted of Jack's legislative record. Nevertheless I am sure that you would want to have these corrections for the future. Perhaps we can talk all this over next time you are up on the Hill." Under his signature, Kennedy adds a brief postscript, which reads, "Jack, You made my mouth water describing that dessert. I hope you will drop in and see me. Bob." In fine condition, with staple hole to top left and mild creases to lower right corners. Accompanied by a photocopy of Anderson's article on the Kennedy brothers from Parade magazine.

A famously close-knit family with generations of notable politicians, the Kennedys-especially Bobby-had cultivated a mutually beneficial working relationship with the media, enabling them to effectively promote their ever-growing political ambitions. Receiving advanced copies of articles scheduled for publication, RFK had a reputation for unleashing strings of harsh criticism, as displayed in this April 18, 1957, letter to Jack Anderson, while still maintaining fruitful relationships. Calling the writer out on his shoddy fact-checking, Bobby pointedly corrects portions of the article, beginning with the claim of JFK's "large staff" of speechwriters. In truth, John had hired only Joe Healey, longtime friend James Landis, and John Harriman of The Boston Globe to serve as his strategy team and help out with speeches, with a former editor at the St. Louis Post-Dispatch serving as his press agent. Continuing with passionate denouncements of the author's further claims-which portrayed a controlling father, pulling strings for his financially reckless sons-Kennedy daftly displays the forceful determination, loyalty, and resilience that characterized his role as the go-to son during critical times. After his brother's tragic death, he became the Kennedys' 'heir apparent,' a senator grooming for a greater destiny, until he too was cut down by an assassin's bullet. An outstanding letter from the 'Brother Protector,' defending his family's name to an important media figure.