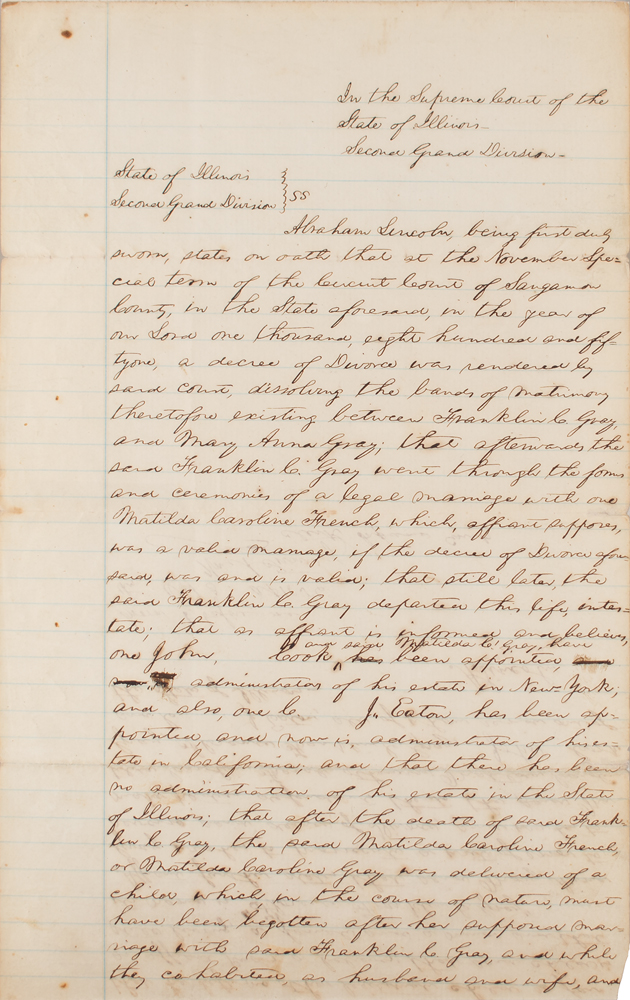 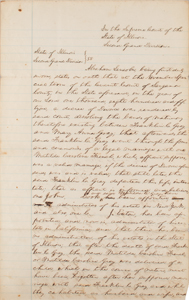 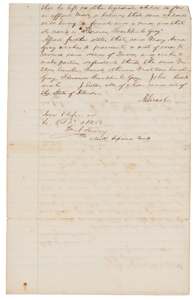 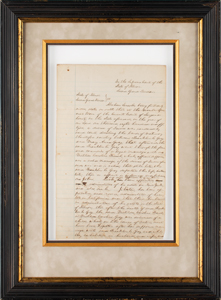 ADS, signed in the third-person, "Abraham Lincoln," and at the conclusion, “A. Lincoln,” one page both sides, 7.75 x 12, October 3, 1856. Lengthy handwritten affidavit by Lincoln, filed with the "Supreme Court of the State of Illinois, Second Grand Division," concerning the disposition of a contested estate. In part: "Abraham Lincoln, being first duly sworn, states on oath that at the November special term of the Circuit Court of Sangamon County, in the State aforesaid, in the year of our Lord one thousand, eight hundred and fifty one, a decree of Divorce was rendered by said court, dissolving the bands of matrimony theretofore existing between Franklin C. Gray and Mary Anna Gray; that afterwards the said Franklin C. Gray went through the forms and ceremonies of a legal marriage with one Matilda Caroline French…after the death of said Franklin C. Gray, the said Matilda Caroline French was delivered of a child, which in the course of nature, must have been begotten after her supposed marriage with Franklin C. Gray, and while they co-habitated, as husband and wife, and that he left no other legitimate child, so far as affiant knows, or believes; that said child is still living, a female and a minor, and that its name is 'Florence Franklin C. Gray.'" Nicely signed at the conclusion by Lincoln, and countersigned by clerk William Turney. Matted and framed with acrylic on both sides to an overall size of 15.5 x 21. In fine condition.

In the case referenced, Mary A. Gray v. Matilda C. French, et al., in the Illinois Supreme Court, Mary Gray sought to overturn her divorce in order to collect from her former husband's considerable estate. If successful, her attempt would render the child of her ex-husband's new wife a bastard, and neither the new wife nor the child would legally be entitled to an inheritance. In this sworn affidavit, neatly written by Lincoln in his distinctive hand, the future president attests to his knowledge of both the legal divorce and the paternity of the child. Between the desirable presence of both variations of his signature—"Abraham Lincoln" and "A. Lincoln"—and the considerable amount of handwriting, this is an excellent piece of Lincolniana.