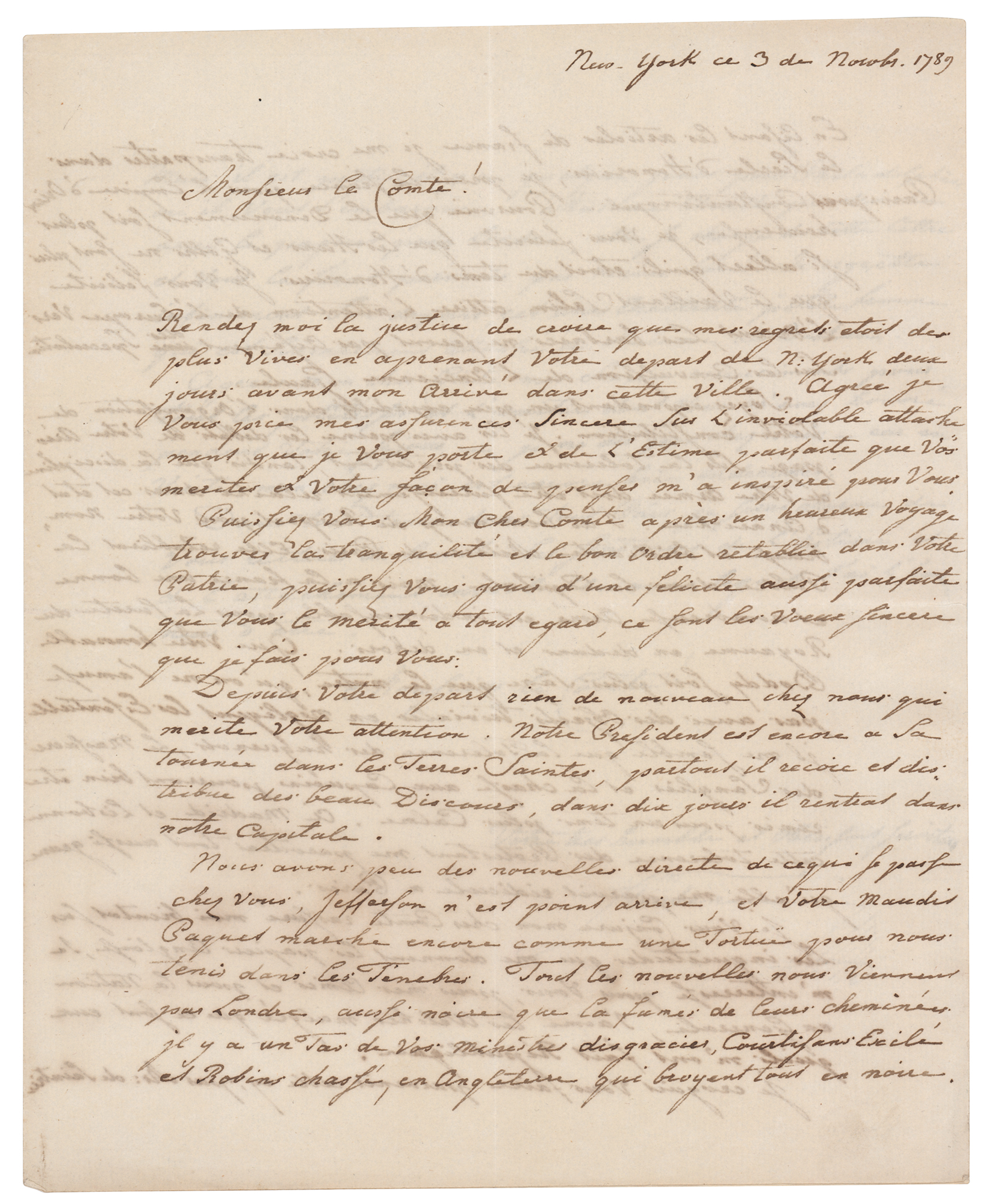 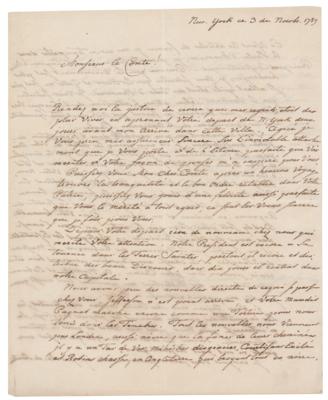 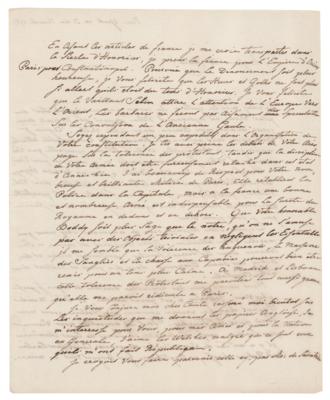 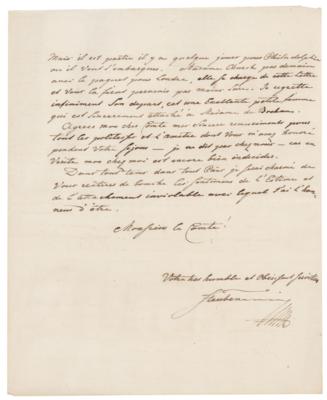 ALS in French, signed “Steuben,” three pages on two adjoining sheets, 7.25 x 9, November 3, 1789. Handwritten letter to French diplomat Elénor-François-Elie, Comte de Moustier, in full (translated): “Please trust me when I tell you that I was most disappointed upon learning that you had left New York just two days before my own arrival here. Be assured of my unwavering attachment to you and of my highest esteem that your merits and your way of thinking have inspired in me. May you, my dear Count, after a safe voyage, find tranquility and order reestablished in your country, and may you enjoy perfect happiness commensurate with your merits: those are my sincere wishes for you.

Since your departure nothing here has happened that merits your attention. Our President is still on his tour of the Holy Land; he receives and gives beautiful speeches everywhere. In ten days he will return to our capital.

We have very little direct news of what is going on where you are. Jefferson has still not arrived, and your cursed ship still moves as slowly as a turtle to keep us in the dark. We get all our news via London, as dark as the smoke out of their chimneys. A lot of your ministers have been disgraced, courtiers exiled, robins chased to England and all are disheartened. Reading the articles about France, I feel transported to the century of Honorius. France stands for the Eastern Empire, and Paris for Constantinople. Assuming that the outcome will be happier, I am glad for you that the Huns and the Goths are not as active as they were at the time of Honorius. And I am glad for you that the valiant Selim turns Europe’s attention toward the East and that the barbarians will not easily speculate on the convulsions of Ancient Gaul.

Meanwhile, try to get on with the organization of your constitution. It pains me to read about your tribunal’s debates about tolerating Protestants, while the discipline of your army must be ridiculously lax in this state of anarchy. I have a lot of respect for your large and brilliant Paris militia; they will reestablish the police in the capital, but for France a good and a large army is indispensable for the safety of the kingdom at home and abroad. May your honorable Body be wiser than ours and not entertain itself with trivial things while neglecting essential ones. It seems to me that the tolerance of the Huguenots, the massacre of boars [‘sangliers’], and the hunt for Capuchins could well wait for calmer days. In Madrid and Lisbon, that tolerance of Protestants strikes me as serious as it strikes me as being ridiculous in Paris.

I beg you, my dear Count, reassure me soon about the unrest that I read about in the British papers. I care about you, about my friends, and about the nation in general. I love the Welsh, even though it was they who made me a Republican.

I was planning to have this get to you via Mr. de Saintrée. But he left a few days ago for Philadelphia, where he will embark. Madame Church takes a ship for London tomorrow and she will make sure this letter will get into your hands. I am very sorry to see her go. What a nice little lady; she is very close to Madame de Brehan.

Dear Count, please accept my gratitude for all the kindness and friendship you honored me with during your stay - I am not saying ‘in my home’ because, to tell the truth, my home has not yet been decided. Whenever and wherever in Paris, I will be happy to tell you in person of my esteem and unwavering attachment with which I have the honor of being, dear Count, Your humble and obedient servant.” In fine condition.

At the time of our letter, Steuben was residing in New York City, then the capital of the fledgling republic. He was present at the inauguration of President Washington that had occurred seven months prior, and mentions the new president’s ongoing tour of New England (the “Holy Land”) that lasted from October 15 to November 13, 1789, when the General traveled ‘through Connecticut, Massachusetts, and New Hampshire. He visited nearly sixty towns, stopping along the way to visit factories, talk with farmers, and partake in celebratory festivities. From Washington’s perspective, it was a fact-finding and promotional tour; from the perspective of the people he visited, it was both a chance to celebrate and to advise their new president. In large part, Washington intended the tours to rally support for the Constitution and promote a strong central government in the face of fierce state loyalties.’

Our letter also mentions Thomas Jefferson, who became the first secretary of state in September 1789. Jefferson had been serving as one of the United States Ministers in Paris since 1785, but resigned his post to take up an unspecified position in Washington’s administration at the end of August. His return to the United States was plagued by delays and mishaps including a fire aboard his ship, before Jefferson finally arrived in Norfolk, Virginia on November 18. It was only after he arrived that he read of his appointment as secretary of state in a newspaper; official notice didn’t arrive until the following month.

Steuben also expresses his eagerness to obtain news from France, which had been in tumult since the revolution’s beginning in May. The Bastille was stormed on July 14, and in August, the National Constituent Assembly published the Declaration of the Rights of Man and the Citizen, which Jefferson and the Marquis de Lafayette, the celebrated veteran of the American Revolution, assisted in authoring. This historic document, among other things, granted equal rights to Protestants, namely French Huguenots, and was opposed by the Catholic Capuchin order that dominated the Third Estate of the Estates General of 1789. Steuben seems to be dismissive of these events, relegating them to the level of minor details that could be dealt with after the Paris National Guard (under Lafayette) restored order. Steuben mentions the French aristocracy and “robins” fleeing to England, the latter possibly a reference to the antiquated term that described French magistrates and men of law who, as a class, were sometimes referred to this way. Steuben mentions the Emperor of the Western Roman Empire Honorius (384-423) remembered for his chaotic reign during which attacks on Gaul, Italy, Hispania, and Britannia by barbarians proliferated, culminating in the Sack of Rome. He compares Paris to Constantinople, the capital of the Eastern Roman Empire with which Honorius was at odds, and mentions Selim I (1470-1520) the Ottoman sultan best remembered for his expansion of the empire.