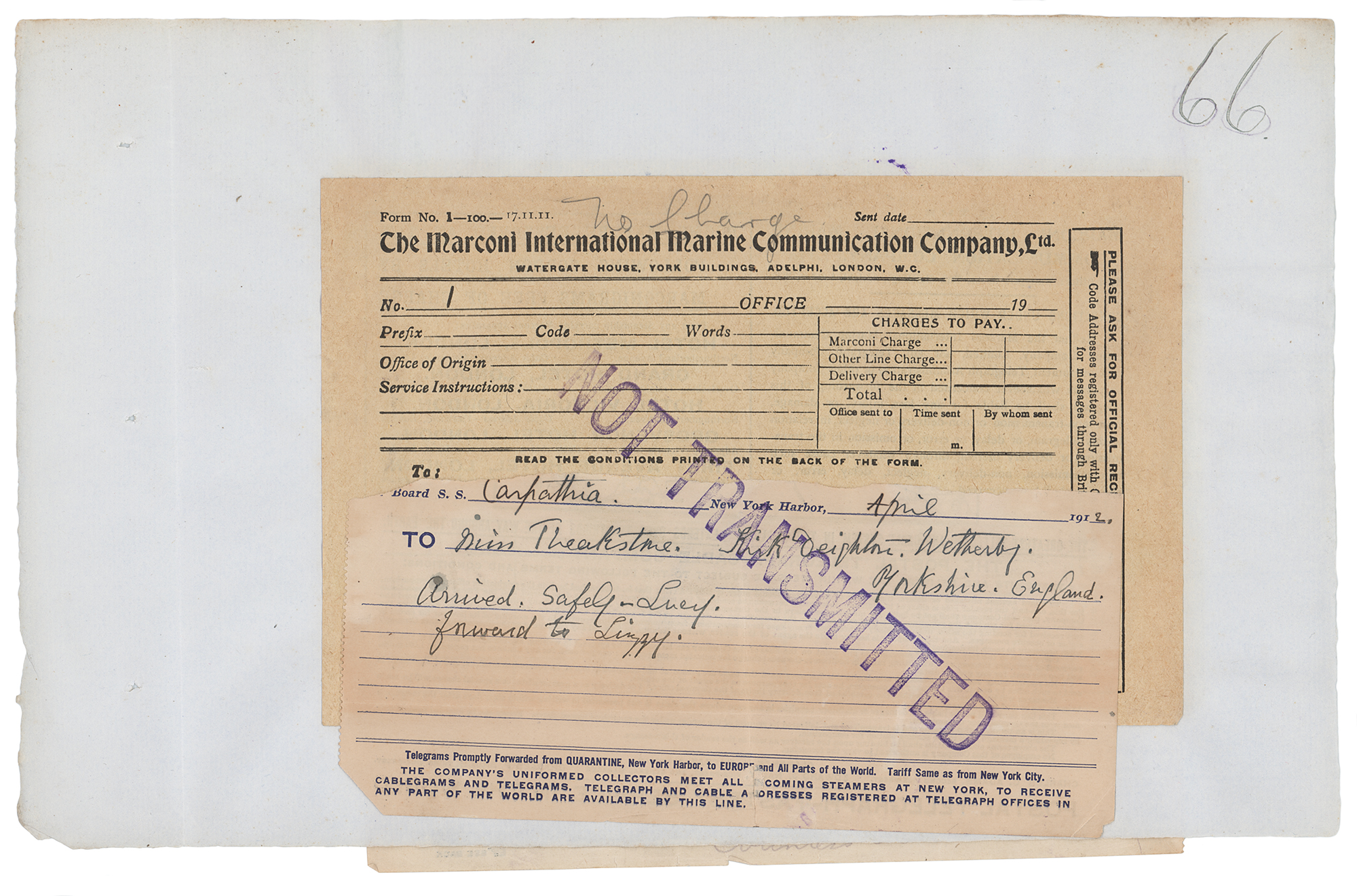 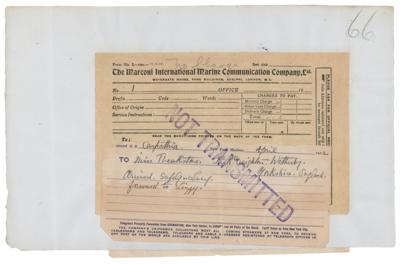 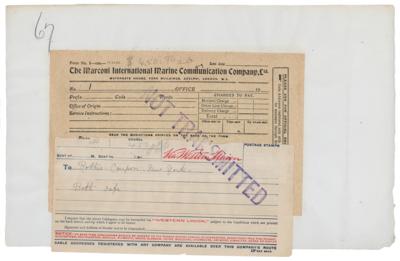 Two original Marconigrams sent by two survivors of the Titanic while aboard the Carpathia. Both are stamped “Not Transmitted” and affixed to opposite sides of a 13.5 x 8.5 album page, which was removed from an evidence book used by the British Enquiry during their investigation that was held between May and July 1912; these pages are accordingly numbered as 66 and 67. The first is written in ink on part of a New York Harbor Quarantine (NYHQ) telegram form affixed to a Marconi International Marine Communication Company telegram sheet. The NYHQ form, issued on board “Carpathia” and dated to “April 1912,” reads: “Miss Theakstone, Dirk Deighton, Wetherby, Yorkshire, England / Arrived Safely—Lucy / forward to Lizzy.” The top of the Marconi sheet is marked “No charge.”

The second, written in ink on a Western Union cablegram, charged “4.50” for “2” words, and initialed “PBB,” reads: “Rothes—Coupon—New York / Both safe.” Lower section of reverse reveals the endorsement, “Countess Rothes.” The cablegram is likewise affixed to a Marconi sheet, marked at the top in pencil, “$4.50, Paid,” and in ink, “18.9,” presumably the charge in sterling. In overall fine condition. These documents were obtained by Titanic Historical Society members John and Vera Gillespie from John Booth, the author of the book, Titanic Signals of Disaster, published by White Star in 1993.

After 25 years of running a nursing home in Yorkshire, England, Lucy Ridsdale boarded the Titanic with the aim of settling down in the United States, enjoying her retirement with relatives in Marietta, Ohio, and Milwaukee, Wisconsin. As such, she brought everything with her, which amounted to 300 pounds of luggage, which contained a large amount of gold, diamonds, and jewelry, all which was lost in the disaster. She was one of the first surviving passengers to live past age 90.

First class passenger, Noel Leslie, Countess of Rothes, was a British philanthropist best known as a heroine of the 1912 Titanic tragedy, when she helped to command her lifeboat (No. 8) in concert with Able Seaman Thomas William (Tom) Jones. Noel handled the tiller of the boat, steering it clear of the sinking liner, and later assisted in rowing it to the rescue ship, all the while encouraging other survivors with her calm decisiveness and optimism.