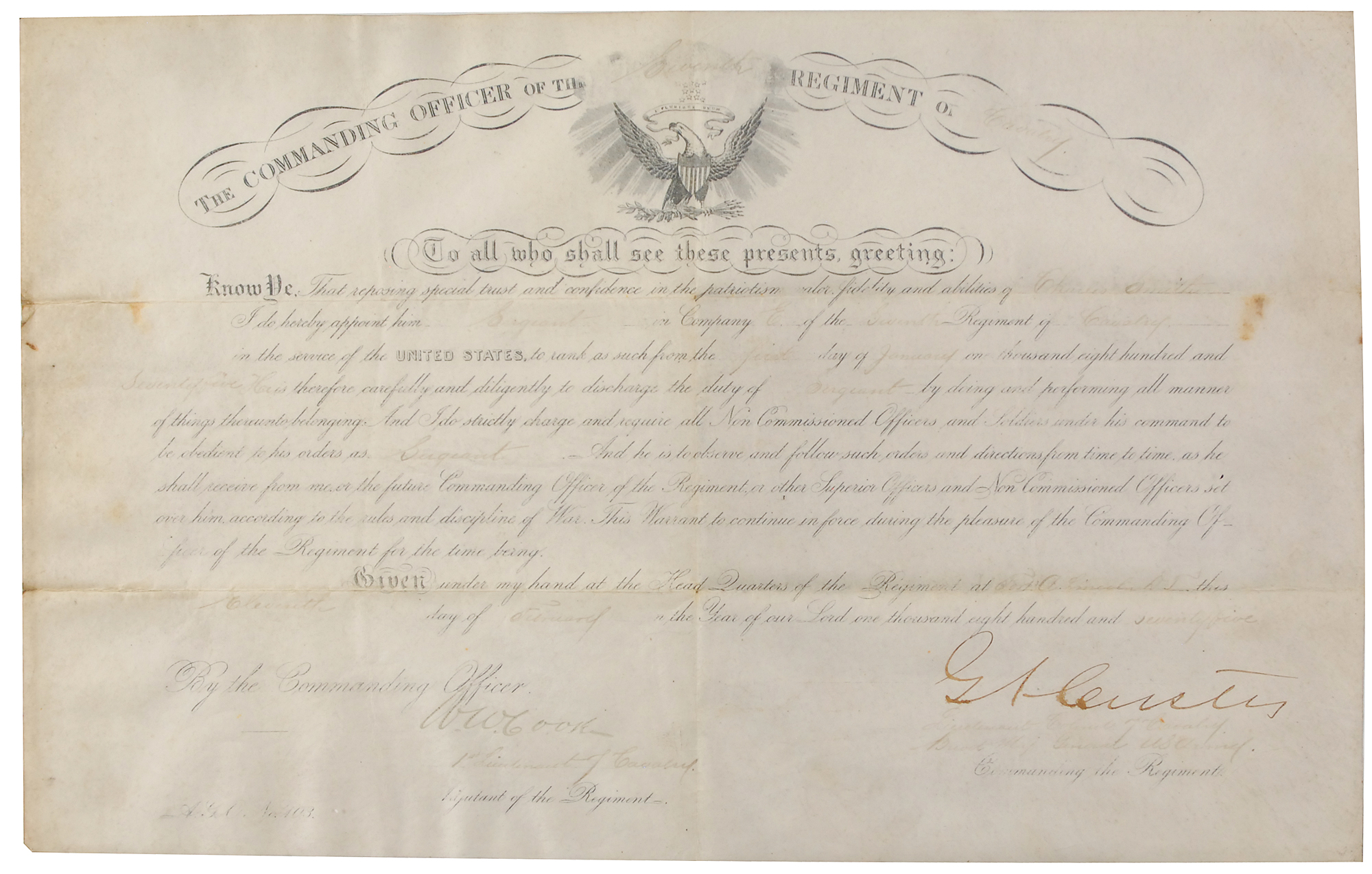 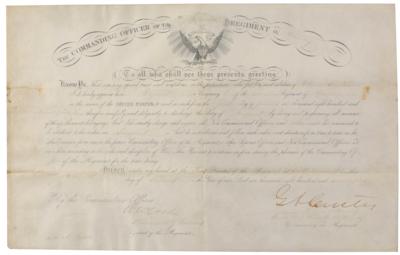 Extremely rare and highly sought-after partly-printed vellum DS, signed "G. A. Custer," one page, 15.5 x 9.75, February 11, 1875. Custer, as Lieutenant Colonel of the Cavalry, appoints "Charles Smith…a Sergeant in Company E of the Seventh Regiment of Cavalry in the service of the United States." Robustly signed at the bottom by Custer and countersigned by commanding officer W. W. Cooke. In fine condition, with a few small stains, and the handwritten portions of the body of the document light but legible. The appointee, Charles F. Smith, was born in 1848 in Germany and enlisted in the United States Army on March 3, 1871, for a term of five years; fortunately, this term expired and he was discharged just three months before the Battle of the Little Bighorn and 'Custer's Last Stand,' in which his company was annihilated. Smith then reenlisted in 1881 for another period of five years. The Custer appointment is accompanied by a small archive related to Smith's career, including the discharge from the end of his first term of service; his subsequent oath of reenlistment and allegiance; a letter of recommendation; his membership certificate in the Regular Army and Navy Union; a certificate of deposit issued by Boatmen's Saving Bank in St. Louis; and a document granting him citizenship in the United States.

This stunning commission—ornately imprinted with the American eagle bearing a shield and clutching arrows and an olive branch beneath the heading, "The Commanding Officer of the Seventh Regiment of Cavalry"—holds a terrifically bold and much sought-after Custer signature. The counter-signature by William Winer Cooke, 1st Lieutenant Colonel of Cavalry and Adjutant of the Regiment, adds greatly to this document's desirability: Cooke, a member of the so-called 'Custer Gang,' was one of the commander's most loyal men and remained so until the end, found by Custer's side on the fields at Little Bighorn in 1876. This is just the third example of a Custer 7th Cavalry appointment that we have encountered, and one of only a handful to be offered at auction in the last 40 years. Originally acquired directly from Smith's descendants, these documents are certain to garner great interest. In addition to the excessive rarity, the historical context lent by the inclusion of Smith's other cavalry documents make this a truly unique and fascinating archive.