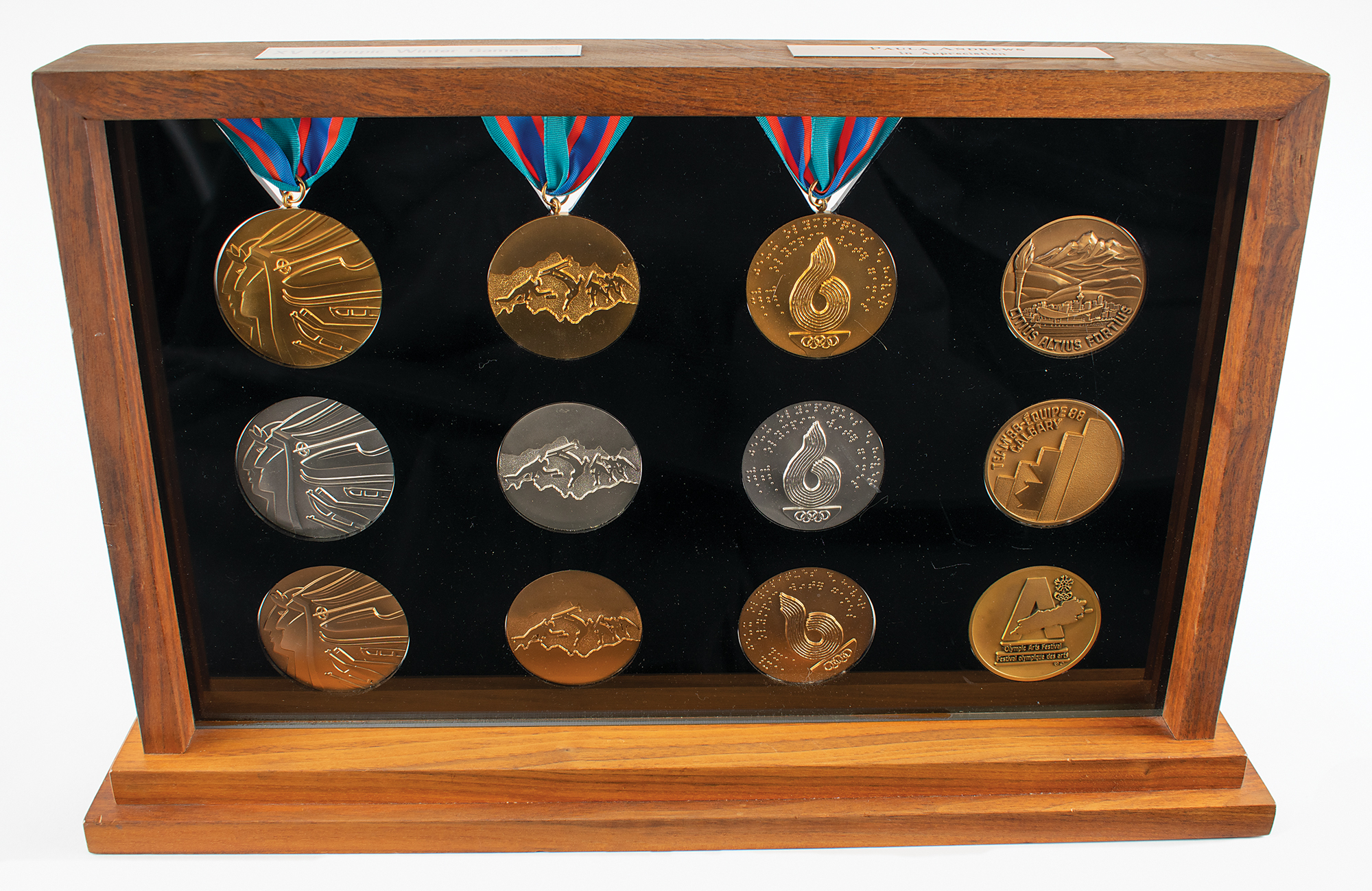 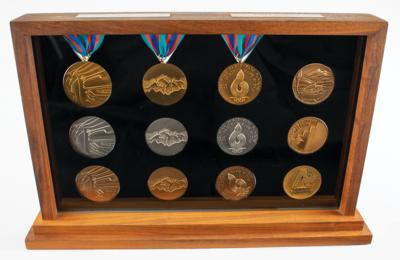 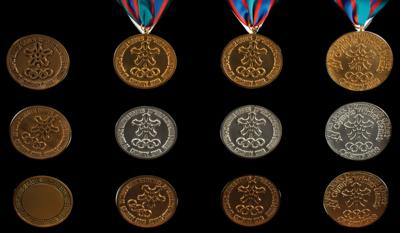 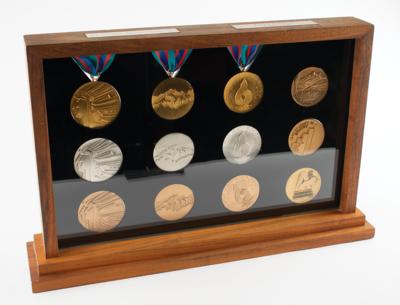 Extraordinary and rare example of a set of medals from the Calgary 1988 Winter Olympics, which were presented to Paula Andrews, the mayor of the Olympic Village and a member of the Calgary Winter Olympic Organizing Committee (OCO ’88) Board of Directors. The set features a total of twelve medals: gold, silver, and bronze winner's medals for the official Olympic events, the Olympic demonstration sports, and the disabled skiing exhibition event; as well as bronze participation medals for the Olympics, the Team ’88 Volunteers, and the Olympic Arts Festival. The medals are presented in a dual-paned wooden display case prepared by the mint (Jostens, Inc.), measuring an overall 21.75″ x 13.75″ x 4.75″, with plaques affixed to the top, "XV Olympic Winter Games" and "Paula Andrews, In Appreciation.”

Displayed on the far left, the fronts of the Olympic medals depict combined profiles of a laureated athlete and a First Nations indigenous person whose headdress is formed by winter sporting equipment. Next, the demonstration sports medals have pictograms showing three of the demonstration events of the Games: curling, freestyle skiing, and short track speed skating. In the third column, the disabled skiing medals feature a stylized Olympic flame with Braille text above. On the far right, the Olympic participation medal bears a panoramic view of Calgary, the Saddledome Stadium, and the Canadian Rocky Mountains, with the Olympic motto below; the Team ’88 Volunteers medal features a geometric mountain landscape; and the Olympic Arts Festival medal features a stylized "A" with a small Calgary Olympic emblem to the upper right. All have bilingual text on the reverse, "XVes Jeux Olympiques d'hiver, XV Olympic Games, Calgary 1988," with the athletic medals also bearing the stylized snowflake/maple leaf emblem of the Games and the Olympic rings at center.

The gold medals for the Olympics, Olympic demonstration sports, and disabled skiing are suspended from cut lengths of their cyan, red, and blue ribbons, as is typical for these Jostens displays; what is atypical is that these medals are not marked as samples—we therefore believe that they are true unawarded winner's medals (even the Olympic medals in a similar set on permanent display at Calgary's Saddledome are marked "Sample" on the front). Due to the manner of display, we have not been able to weigh or examine the medals outside of the frame; though it would be highly unusual (all Jostens-minted sample medals we have seen are marked as such on their face), there remains the small possibility that these are marked as samples on the edge.

These official winner's medal displays were created in extremely limited quantities; this being just the second we have seen offered at public auction. These medals would be highly desirable individually; to have the complete set together, in its original display case, is truly spectacular—this is a bona fide Olympic treasure from the first Canadian Winter Olympics.