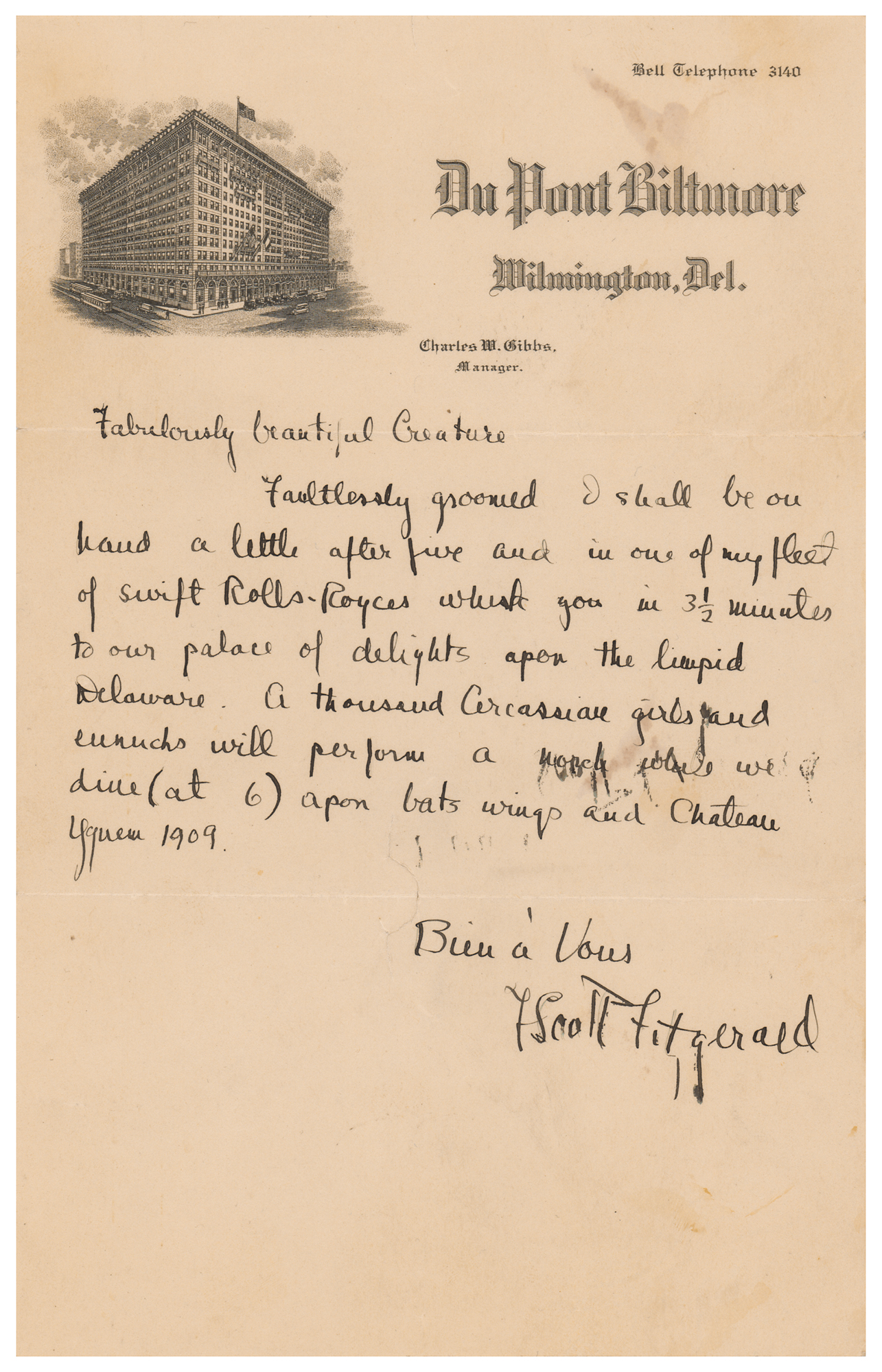 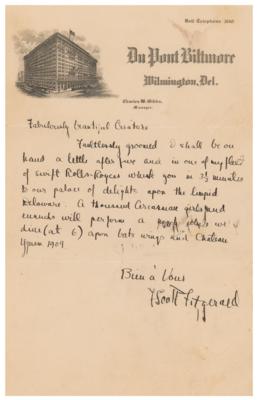 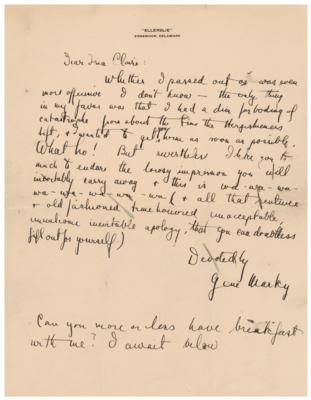 Rare pairing of handwritten letters from F. Scott Fitzgerald to the charming actress Ina Claire. Scholars have long known that Fitzgerald was fascinated with actress Ina Claire from the moment as a teenager he first saw her on the stage. It is less well known that Claire attended one of the Fitzgeralds' notorious parties at the Ellerslie estate in Delaware, where the Fitzgeralds resided from 1927 to 1929. These letters evoke all the promise and disappointment of the opulent Jazz Age, and demonstrate Fitzgerald's crafty sense of humor. Includes:

ALS signed "F. Scott Fitzgerald," one page, 6 x 9.5, DuPont Biltmore letterhead, no date. From the lobby of the Biltmore Hotel in Wilmington, Fitzgerald addresses Claire as a "Fabulously beautiful Creature," writing, in full: "Faultlessly groomed I shall be on hand a little after five and in one of my fleet of swift Rolls-Royces whisk you in a 3 1/2 minutes to our palace of delights upon the limpid Delaware. A thousand Circassian girls and eunuchs will perform a march while we dine (at 6) upon bats wings and Chateau Yquem 1909."

ALS by Fitzgerald, playfully signed "Gene Marky," one page, 8.5 x 11, Ellerslie letterhead, no date [but the morning after the previous letter]. Handwritten letter to "Ina Claire," apologizing for his previous night's behavior. The possibilities of the last letter evaporate in the first line of this note, written the next morning in the fog of a hangover. In full: "Whether I passed out or was even more offensive I don't know—the only thing in my favor was that I had a dim foreboding of catastrophe from about the time the Hergesheimers left, & I wanted to get you home as soon as possible. What ho! But nevertheless less I like you too much to endure the lousy impression you will inevitably carry away & this is wa-wa-wa-wa-wa-wa-wa-wa (& all that sentence & old fashioned time honored unacceptable, unwelcome inevitable apology, that you can doubtless fill out for yourself)." He adds a wistful postscript: "Can you more or less have breakfast with me? I await below." In overall fine condition, with scattered small stains.

Ina Claire dated the screenwriter Gene Markey for a time, and they co-authored the story 'The Bright Alley' that appeared in the February 1927 issue of Harper's Bazaar; this may explain Fitzgerald's use of his name in signing the second letter. None of the published biographies record what went wrong at the Ellerslie dinner. It's possible that Zelda Fitzgerald, if she was present, could have engineered some sort of scene; or Fitzgerald may simply be embarrassed by his own clumsy pass at Claire that may or may not have succeeded.