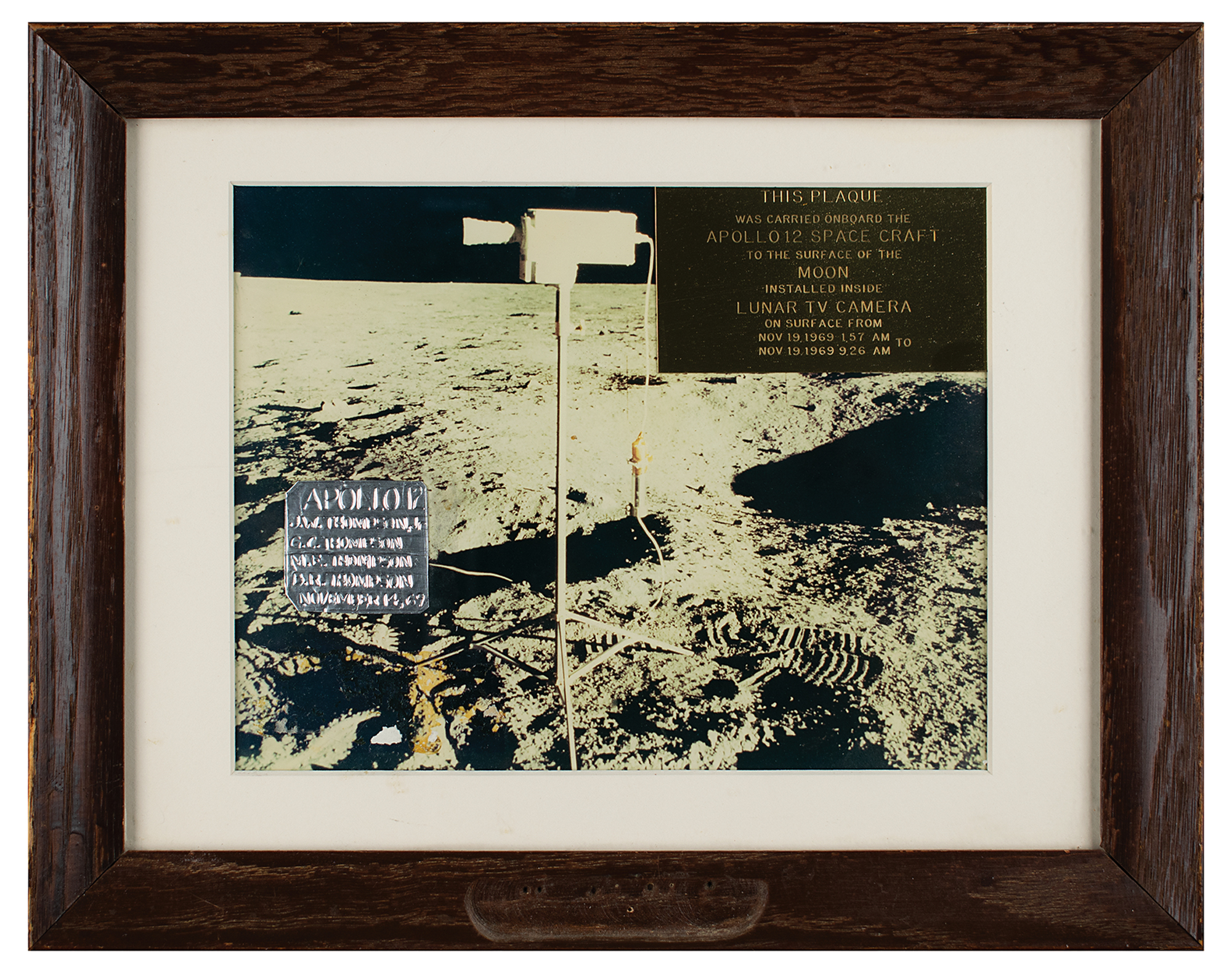 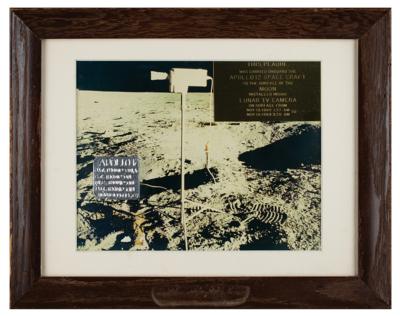 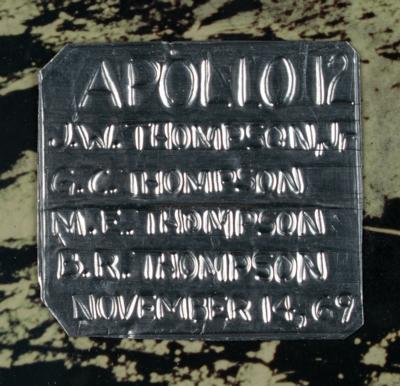 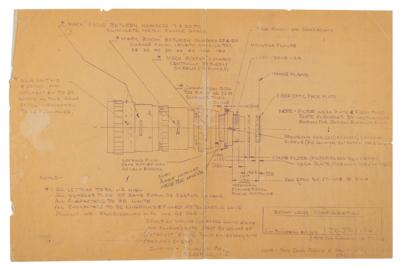 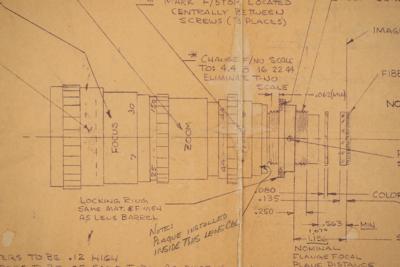 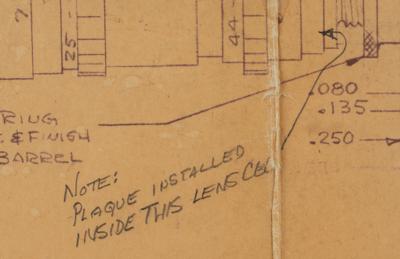 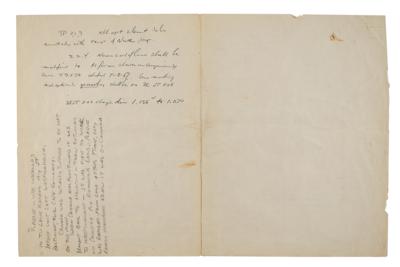 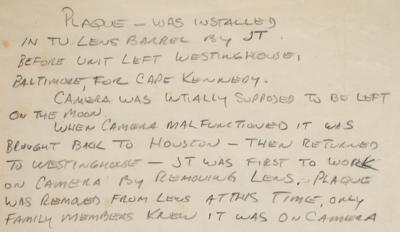 Flown metal plaque that was carried to the moon inside the Westinghouse zoom lens housing of the Apollo 12 color TV camera, which, for seven-and-a-half hours, was exposed to the lunar environment at the Ocean of Storms landing site during the Apollo program’s second moon-landing mission. The small ‘stowaway’ plaque measures 1.75″ x 1.5″ and is engraved as follows: “Apollo 12, J. W. Thompson, Jr., G. C. Thompson, M. E. Thompson, B. R. Thompson, November 14, 69.” The four names on the plaque belong to the three sons and the grandson of Westinghouse Electric Corporation optical engineer John W. Thompson, the man responsible for designing the TV camera’s optical lens components, and who surreptitiously placed the plaque inside the lens housing. The plaque is affixed to a photo of the Westinghouse TV camera on the lunar surface, with the upper right of photo bearing an affixed brass presentation plate: “This plaque was carried onboard the Apollo 12 spacecraft to the surface of the moon, Installed inside Lunar TV Camera, On surface from Nov. 19, 1969 1:57 AM to Nov. 19, 1969 9:26 AM”; the text of this brass plate matches a label affixed to the reverse of the photo. Framed to an overall size of 13.75″ x 10.75″. In fine condition.

Included with the plaque is the original 17″ x 11″ Westinghouse blueprint (SK-JT-1106) for the “Zoom Lens Configuration,” designed by Thompson on August 11, 1969, which features a notation pointing to the exact location where the plaque was installed. Reverse of blueprint bears additional handwritten notations: “Plaque—was installed in TV lens barrel by JT before unit left Westinghouse, Baltimore, for Cape Kennedy. Camera was initially supposed to be left on the moon. When camera malfunctioned it was brought back to Houston—then returned to Westinghouse—JT was first to work on camera by removing lens. Plaque was removed from lens at this time. Only family members knew it was on camera.”

Accompanied by photocopies and newspaper clippings related to the role of Westinghouse during the Apollo program, and by a notarized letter of provenance signed by Brent Richard Thompson, the aforementioned grandson, who states, in part: “John W. Thompson, Sr., World War 2 Pilot, Army Air Corps B17 Navigator, and later an optical engineer employed with Westinghouse in Maryland, contracted by NASA during the Apollo program, was responsible for designing the optical lens components of the Apollo 12 Color Lunar TV Camera. During final assembly of the camera in the secure white room, [Thompson] installed, hidden from view inside the lens housing, a small metal plaque with the hand-engraved names of his 3 sons…[and] infant grandson.

On the day Apollo 12 launched, the Thompson family was in front of the television witnessing history along with the rest of the world, however, we had a secret that would be kept as such until [Thompson] passed away decades later…

Later in the mission while Astronaut Alan Bean was preparing to operate the lunar camera to provide the world with live color television coverage, he had unfortunately pointed it at the sun, which had damaged its operation.

It was at this moment [Thompson] was horrified at what had happened; not knowing the actual cause of the failure and the possibility the unauthorized artifact he installed would be later discovered. There were millions of dollars involved with several invested interests for the camera and job loss and or legal repercussion was a real fear.

The camera, which was supposed to be left on the surface of the moon forever holding the Thompson secret in honor of the family, was ordered back to Earth for inspection. The camera was sent back to Westinghouse in Maryland...As luck would have it, [Thompson] was the first one tasked to begin disassembly of the camera and managed to retrieve the plaque before it was discovered by management...It was framed shortly after and hung on his bedroom wall until the day he passed.”

The task of making a lunar television camera was no simple or inexpensive challenge, and in October 1964, NASA awarded Westinghouse an $8 million contract to create seven lunar cameras, machines that were hardy enough to endure the vibrations of a Saturn V rocket launch, and then survive the 250-degree heat of lunar days and the minus 300-degree freeze of lunar nights. The Apollo 11 TV camera, which was mounted on the side of the Lunar Module Eagle, was a great success, as Neil Armstrong's first step onto the lunar surface was broadcast on live TV to a worldwide audience.

The televised experience was remarkable, however, a bit blurry and in monochrome. To improve the quality of television pictures from the moon, an updated color camera was carried on Apollo 12, marking the first time a color television camera was taken to the lunar surface. On November 19, 1969, the Lunar Module Intrepid touched down into the Ocean of Storms, and some four-and-a-half hours later, CDR Charles Conrad and LMP Alan Bean began their first of two lunar EVAs. Unfortunately, the camera's Secondary Electron Conduction (SEC) tube was destroyed when it inadvertently came into contact with the sun, subsequently halting the mission’s highly anticipated colorized television coverage.

This ‘stowaway’ plaque is, in essence, an utterly unique flown artifact. While history has shown that it was not entirely uncommon for astronauts to secretly stash ‘gag’ or ‘gotcha’ items in Apollo modules, this plaque was never intended to be found. The ingenious, if not entirely audacious, plan nearly backfired for John Thompson, but the result is a peerless lunar keepsake forever connected to one of the Apollo program’s more unforgettable gaffes. Originates from the grandson of John W. Thompson.