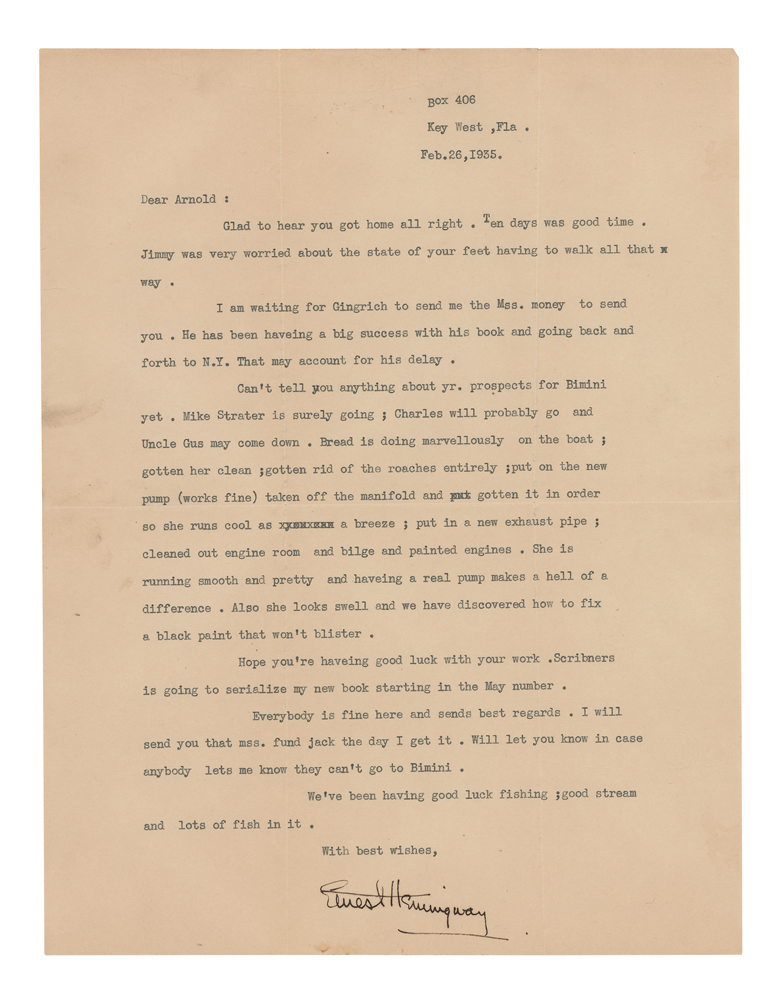 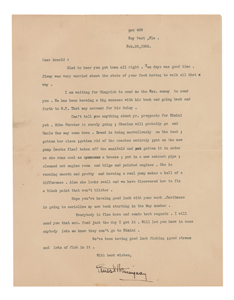 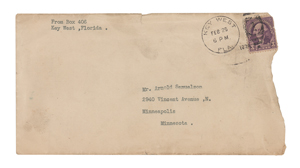 TLS, one page, 8.5 x 11, February 26, 1935. Letter to Arnold Samuelson, in part: "I am waiting for Gingrich to send me the Mss. money to send you. He has been haveing [sic] a big success with his book and going back and forth to N.Y. That may account for his delay. Can't tell you anything about yr. prospects for Bimini yet. Mike Strater is surely going; Charles will probably go and Uncle Gus may come down. Bread is doing marvellously on the boat; gotten her clean; gotten rid of the roaches entirely; put on the new pump (works fine) taken off the manifold and gotten it in order so she runs cool as a breeze; put in a new exhaust pipe; cleaned out engine room and bilge and painted engines. She is running smooth and pretty and haveing [sic] a real pump makes a hell of a difference. Also she looks swell and we have discovered how to fix a black paint that won't blister. Hope you're haveing [sic] luck with your work. Scribners is going to serialize my new book starting in the May number. Everybody is fine here and sends best regards. I will send you that mss. fund jack the day I get it. Will let you know in case anybody lets me know they can't go to Bimini. We've been having good luck fishing; good stream and lots of fish in it." In fine condition, with light soiling. Accompanied by the original mailing envelope.

The recipient, Arnold Samuelson, was an aspiring writer in his early 20s who, a year earlier, had hitchhiked his way across Depression-era America to Key West in hopes of meeting his idol, Ernest Hemingway. He found his way to the author's doorstep and, after an initially gruff welcome, was invited to return and discuss the craft of writing. Living the life of a tramp, Samuelson had been spending his nights in jail when Hemingway came up with a mutually beneficial arrangement. Having just purchased the 38-foot cabin cruiser Pilar, he hired Samuelson to be its caretaker for a dollar a day—the fishing boat gave him a place to sleep, and he earned some money while still having time to write during the day. Samuelson stayed in this capacity for about a year before returning home, where he received this letter at the end of February 1935. Hemingway was organizing a fishing trip for the upcoming April, planning to travel with friends to the Bimini area of the Bahamas in search of giant tuna and marlin. One of the members of the party that Hemingway mentions here, Albert 'Bread' Pinder, had taken over the maintenance responsibilities aboard the Pilar after Samuelson's departure and would serve as 'captain' for the Bimini trip. Hemingway also mentions his "new book," referring to his nonfiction work Green Hills of Africa, which appeared in serialization in Scribner's Magazine from May to November 1935. Samuelson went on to write a memoir of his life-changing time in Key West, published posthumously as With Hemingway: A Year in Key West and Cuba. As a letter touching on his literary work, offering insights into his life in Key West and fishing hobby, and discussing the Pilar at length, this is a quintessential 1930s Hemingway piece.