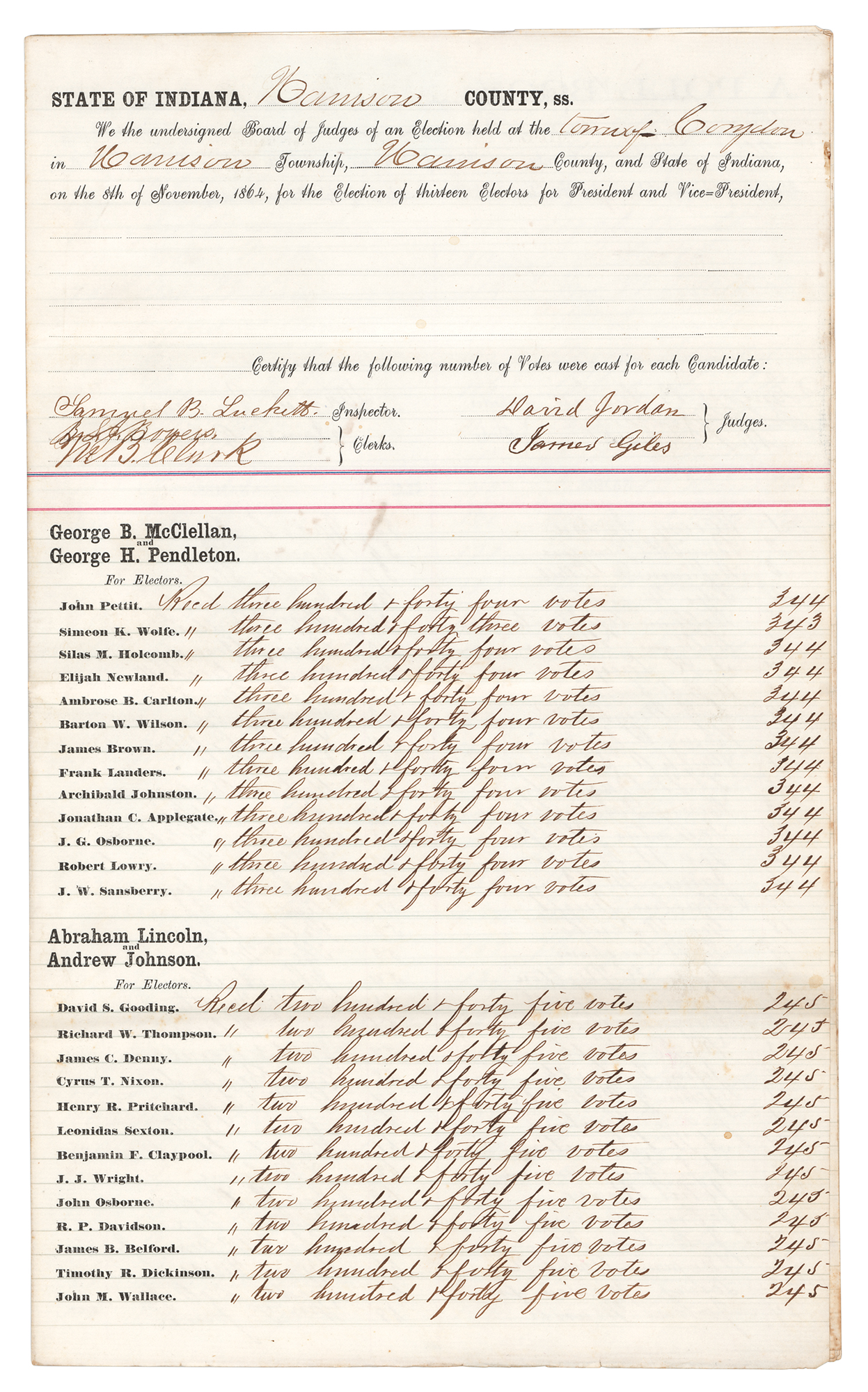 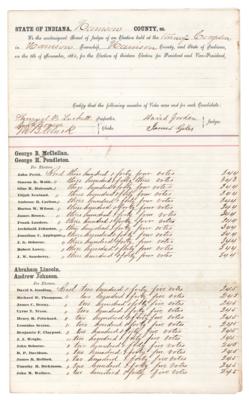 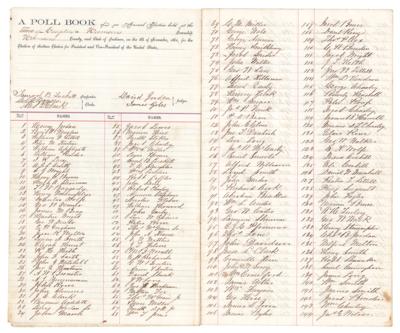 Important presidential poll book from the town of Corydon, Harrison County, Indiana, 16 pages, 8.5 x 14, November 8, 1864. The book reveals opposition against Lincoln in Southern Indiana, recording 344 votes for the George B. McLellan/George H. Pendleton ticket against 245 votes for the Abraham Lincoln/Andrew Johnson ticket. Inside, the document logs the names of 590 voters in Corydon. In fine condition.

During the midst of the Civil War, with nine states in open rebellion and two former Confederate states at least partially under military rule, the United States held its twentieth quadrennial presidential election. Although there was initially some opposition from more radical Republicans, incumbent Republican President Abraham Lincoln became the nominee of the new National Union Party, a coalition of Republicans and War Democrats, at its convention in Baltimore. The party refused to re-nominate Vice President Hannibal Hamlin and instead nominated War Democrat Andrew Johnson of Tennessee for the vice presidency.

The Democratic National Convention in Chicago nominated General George B. McClellan of New Jersey and George H. Pendleton of Ohio for its candidates. Both in their 30s, McClellan and Pendleton remain the youngest presidential ticket ever nominated. Peace Democrats, who considered the war a failure, pushed a peace platform through the Convention, though McClellan was opposed to it, and the contradictions harmed the Democratic campaign.

The Lincoln administration’s conduct of the war, including emancipation, was the central issue in the election, and Democrats criticized the war as a failure and Lincoln as a tyrant who had violated the Constitution. Republicans emphasized the need for victory over the Confederacy and urged voters not to 'change horses in the middle of a stream.' For much of the campaign, Lincoln was convinced he would not be reelected because the war was going badly. However, General William T. Sherman’s capture of Atlanta in September and General Philip Sheridan’s successes in the Shenandoah Valley of Virginia gave hope that the war would soon end in victory.

Southern Indiana was the scene of bitter political divisions during the Civil War. Republican Governor Oliver P. Morton, at odds with Indiana’s Democratic General Assembly, claimed that Democrats were in league with Copperheads and other disloyal elements, and planned to set up a Northwest Confederacy. At the time of the presidential election of 1864, Morton arranged to have many Union-sympathizing soldiers brought home on leave to vote. In the election, Republicans carried the state by 20,000 votes, regained control of the General Assembly, and won eight of eleven seats in Congress.