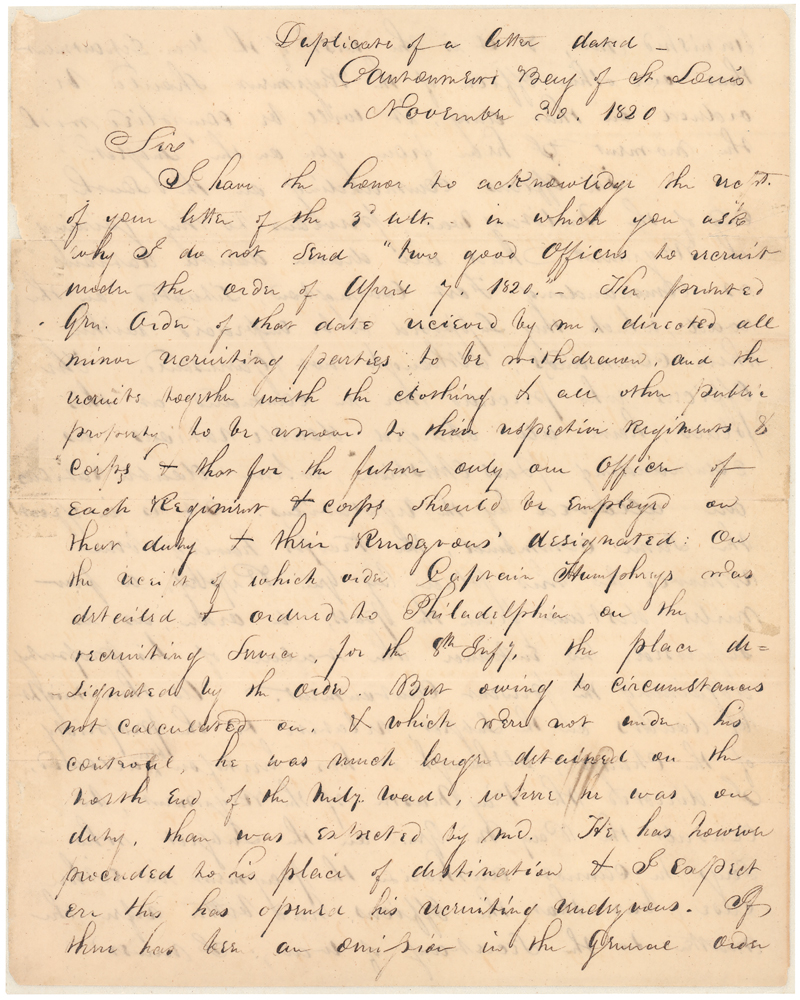 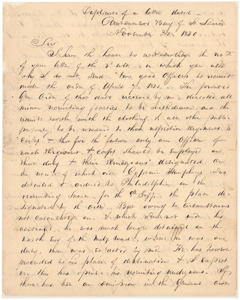 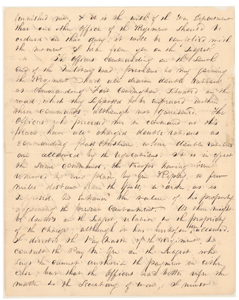 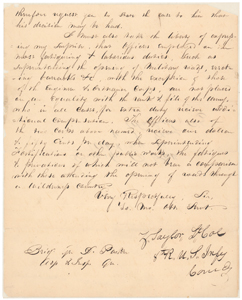 ALS signed “Z. Taylor, Lt. Col., 8th R.U.S. Infy, Comdg,” three pages, 7.75 x 9.75, November 30, 1820. Letter to Inspector General Daniel Parker, in part: "I have the honor to acknowledge…your letter of the 3'd ult., in which you ask why I do not send 'two good Officers to recruit under the order of April 7, 1820.' The printed Gen. Order of that date received by me directed all minor recruiting parties to be withdrawn and the recruits together with the clothing & all other public property to be removed to their respective Regiments & Corps & that for the future only our Officers of each Regiment & corps should be employed on that duty & their Rendezvous' designated. On the receipt of which order Captain Humphreys was detained & ordered to Philadelphia on the recruiting service for the 8th Infy., the place designated by the order. But owing to circumstances not calculated on & which were not under his control, he was much longer detained on the north end of the Mily Road where he was on duty, than was expected by me. He has however proceeded to his place of destination & I expect…this has opened his recruiting rendezvous. If there has been an omission in the general order furnished me, & it is the wish of the War Department that one other Officer of the Regiment should be ordered on that duty, it will be complied with the moment I hear from you on the subject. The officers commanding on the south end of the Military Road, providers to my joining the Regiment, had all drawn double rations as commanding Fort Covington, situated on the road, which they supposed to be embraced within their commands, although not garrisoned. The officers who preceded me in command at this place have all charged double rations as commanding Pass Christian, where double rations are allowed by the regulations. It is in effect the same command, he troops having been removed to this place by Gen. Ripley, a few miles distant from the pass, in order, as is supposed, to enhance the value of his property adjoining the present containment. As there might be doubles on the subject, relative to the propriety of the change, although it has heretofore been allowed, I directed the Pay Master of the Regiment, to consult the Pay M. Gen. on the subject, who says he cannot authorize the payment in either case, but that the officers had better refer the matter to the Secretary of War. I must therefore request you to share the case to him that his decision may be had. I must also sake the liberty oppressing my surprise that officers employed in the most fatiguing & laborious duties such as superintending the opening of Military Roads, erecting barracks, etc., with the exception of those of the Engineer & Ordnance Corps, are not placed on an equality with the rank & file of the Army, who in all cases, for extra duty receive additional compensation. The officers also of the two Corps above named, receive one dollar & fifty cents per day, when superintending Fortifications or other public marks, the fatigues & privations of which will not bear a comparison with those attending the opening of roads through a Wilderness country." In fine condition, with overall archival lamination, and some minor edge loss; this letter was professionally laminated by Wilbur Poole, chief of the Document Preservation Section at the National Archives.

In 1820, Lieutenant Colonel Taylor was engaged in the construction of the Jackson Military Road, which connected Columbia, Tennessee, with Madisonville, Louisiana, with a spur from the Pearl River to Bay St. Louis, Mississippi, on the Gulf of Mexico. He found his troops ill fed and poorly supplied upon his arrival but organized the slender resources at his disposal to complete the project. From 1820 through 1821, Taylor was posted in Bay St. Louis and Natchitoches on the Red River, and established Fort Jessup at Shield’s Spring, Louisiana, which commanded the watersheds of the Red and Sabine Rivers.