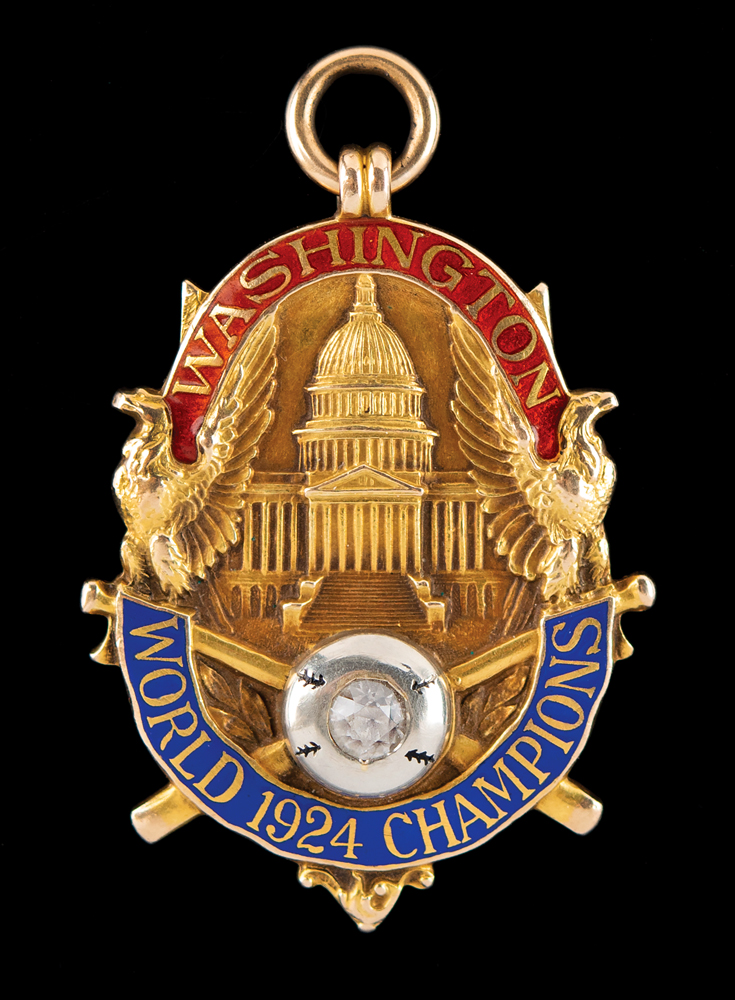 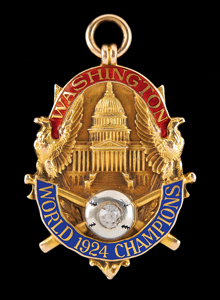 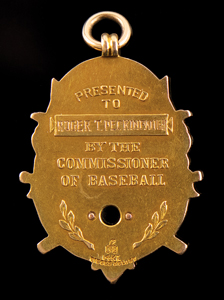 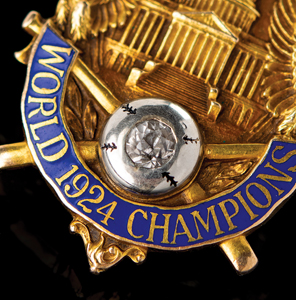 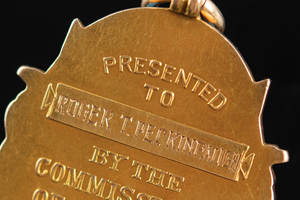 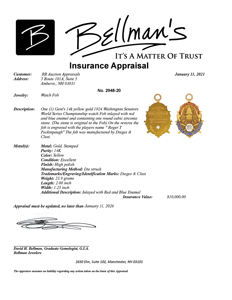 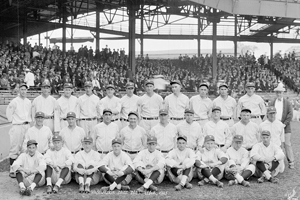 Roger Peckinpaugh's 1924 Washington Senators World Series Championship watch fob pendant, crafted from 14K gold by Dieges & Clust, engraved on the reverse: "Presented to Roger T. Peckinpaugh by the Commissioner of Baseball," and marked "14KT / Dieges & Clust." The front features a patriotic depiction of the US Capitol flanked by bald eagles, over crossed bats and a silver baseball inset with a round cubic zirconia; above, the team's city, "Washington," appears in gilt text over red enamel, and below, "World 1924 Champions," appears in gilt over blue enamel. The pendant is surmounted by a standard golden loop. The piece measures approximately 1.25″ x 2″, and weighs 23.9 grams. In fine to very fine condition. This watch fob is equivalent to a modern World Series ring—prior to rings becoming standard fare in 1926, players and coaches were commonly awarded pendants and watch fobs as championship ware.

The 1924 World Series saw the Washington Senators square off against the New York Giants in an enthralling seven-game sequence. Considered one of baseball's most exciting championship rounds of all time, the story of the Series is one of redemption. The aging hurler Walter Johnson was Washington's ace, making his first World Series appearance after a legendary career. It was Peckinpaugh's second time around, having lost the championship as part of the 1921 Yankees squad in a Series that saw him make a critical error in the deciding game.

Johnson lost a hard-fought battle in Game 1, pitching 12 innings in a heartbreaking loss; Peckinpaugh contributed two hits and an RBI, but it was not enough to overcome the Giants in extra innings. Washington fought back early in Game 2, scoring twice in the first inning. The Giants tied it up in the ninth frame, and the game looked like it was headed for extra innings again. With one out and a man on base in the bottom of the ninth, Peckinpaugh—who had struggled with leg injuries all season—limped to the plate and heroically hit a double, driving in the game-winning run to tie up the series at 1-1. His injury forced him to miss most of Game 3, and all of Games 4 and 5.

After splitting Games 3 and 4, Washington looked forward to another start from the 'Big Train' in Game 5. Despite pitching another complete game, Johnson surrendered 13 hits and recorded his second loss of the series. The New York Times called Johnson's performance 'one of the saddest stories ever known to baseball.' It was clear that the team sorely missed Peckinpaugh's steady infield defense, and he vowed to play again as the club faced elimination in Game 6: 'I'll be in there if I have to tear the leg off and throw it away when the game is over…I'll play if I have to stand on one foot.'

Peckinpaugh took the field for Game 6 with his leg heavily bandaged, and went 2-for-2 with a walk and run scored. He made a brilliant play in the ninth inning to protect Washington's one-run lead, ranging to his left to make a force out at second base as his leg gave out from under him. His teammates had to carry their collapsed shortstop off the field. Player-manager Bucky Harris reported: 'He didn’t break his leg, but he turned a tendon, opened up an old charley horse and must have suffered the agonies of the damned. If that isn’t gameness, there’s no such thing in athletics.'

His own World Series over, Peckinpaugh had to watch the Game 7 thriller from the Washington dugout. Down 3-1 in the bottom of the eighth inning, Bucky Harris hit a two-run single to tie it up. Reaching into the bullpen for his best pitcher, he then called upon the twice-beaten Walter Johnson to open up the ninth. The 'Big Train' stepped up with four scoreless innings, returning to his legendary form. In the bottom of the 12th, a bad hop on an Earl McNeely ground ball allowed Muddy Ruel to score the winning run for Washington. It was Washington's first-ever World Series victory, a feat that would not be repeated for 95 years.