Rare US Army commission signed by President Garfield, one day after Guiteau was banned from the White House 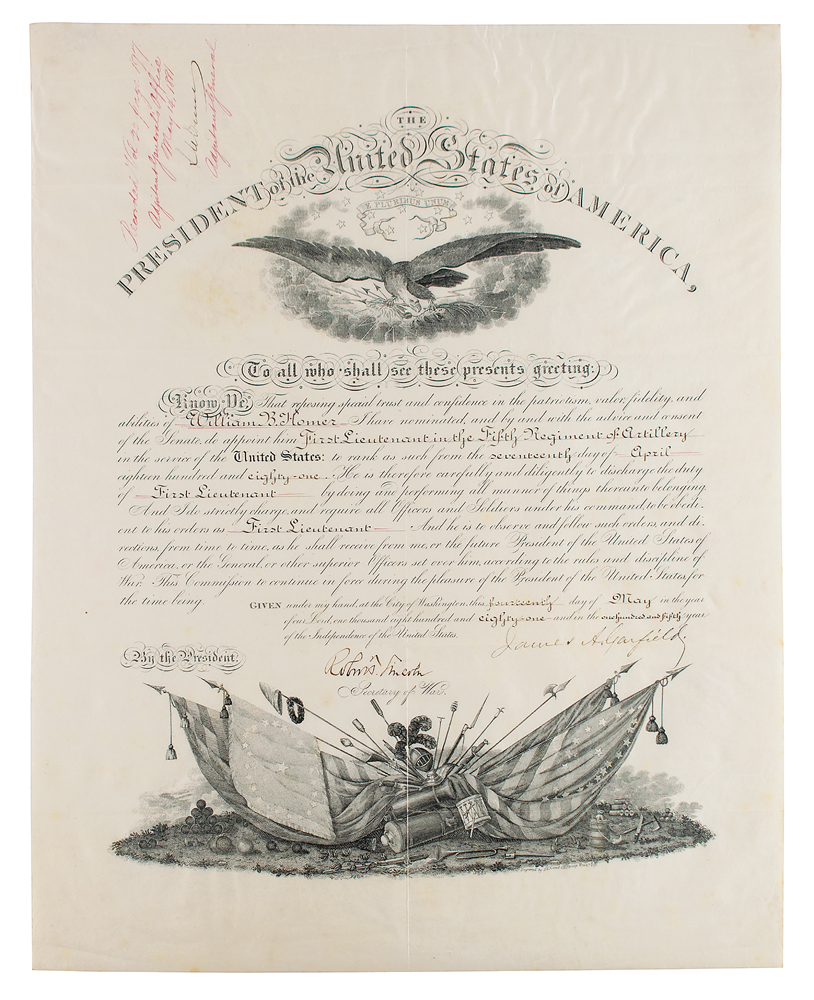 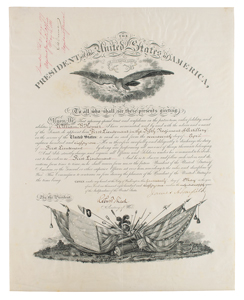 Rare US Army commission signed by President Garfield, one day after Guiteau was banned from the White House

Rare partly-printed vellum DS as president, one page, 15.75 x 19.75, May 14, 1881. President Garfield commissions William B. Homer as "First Lieutenant in the Fifth Regiment of Artillery in the service of the United States." Neatly signed at the conclusion by President Garfield and countersigned by Secretary of War Robert T. Lincoln. In very good to fine condition, with wrinkling to the top, and a faint stain to the left of the eagle vignette.

Two months into his term, Garfield was settling into office and performing many administrative duties—commissioning military officers, appointing judges to the federal bench, naming diplomats, and enacting civil service reforms. One office seeker, Charles Guiteau, had been loitering around Washington since March, pestering officials for a position in the administration. He had been banned from the White House waiting room on May 13th—just one day before Garfield signed the present document. On May 14th, he encountered Secretary of State James G. Blaine, who told him: 'Never speak to me again on the Paris consulship as long as you live.'

Guiteau grew increasingly unhinged, and decided that God had commanded him to kill the president. He borrowed money to purchase a revolver, and lay in wait for Garfield at the Baltimore and Potomac Railroad Station on July 2, 1881. The co-signer of this document, Secretary of War Robert Todd Lincoln, accompanied President Garfield to the station that day, and was an eyewitness to the shooting. This was a rather macabre coincidence, as his own father, Abraham Lincoln had been assassinated, and he would later be present at the killing of President William McKinley.

The wounded Garfield lay sick for two months, and the injury proved fatal in September. As he was in office for a mere six months—and incapacitated for two of them—Garfield's documents signed as president are very scarce and highly sought after.