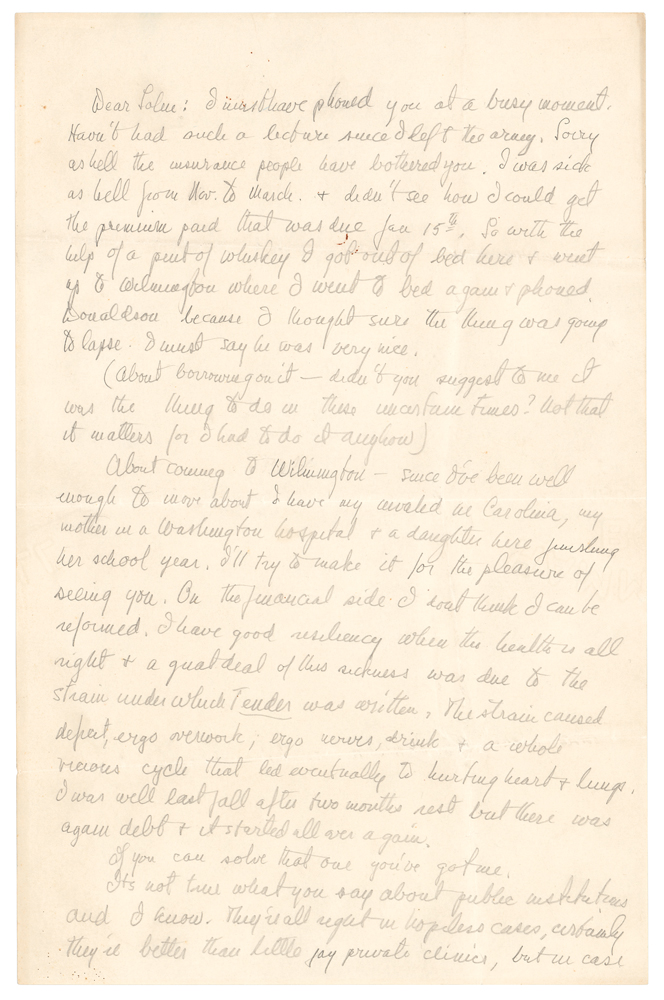 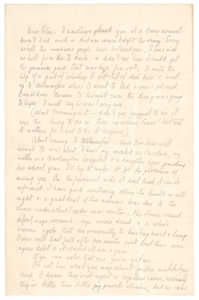 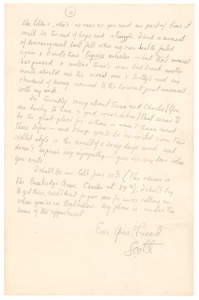 Remarkable ALS in pencil, signed "Ever Your Friend, Scott," two pages, 8.5 x 13, no date. Letter to John [Biggs], a lifelong friend of Fitzgerald's and his roommate while at Princeton. In full: "I must have phoned you at a busy moment. Haven't had such a lecture since I left the army. Sorry as hell the insurance people have bothered you. I was sick as hell from Nov. To March. & didn't see how I could get the premium paid that was due Jan 15th. So with the help of a pint of whiskey I got out of bed here & went up to Wilmington where I went to bed again & phoned Donaldson because I thought sure the thing was going to lapse. I must say he was very nice. (About borrowing on it—didn't you suggest to me it was the thing to do in these warfare times? Not that it matters for I had to do it anyhow).

About coming to Wilmington—since I've been well enough to move about I have my invalid in Carolina, my mother in a Washington hospital & a daughter here finishing her school year. I'll try to make it for the pleasure of seeing you. On the financial side I don't think I can be reformed. I have good resiliency when the health is all right & a great deal of this sickness was due to the strain under which Tender was written. The strain caused defeat, ergo overwork, ergo nerves, drink & a whole vicious cycle that led eventually to hurting heart & lungs. I was well last fall after two months rest but there was again debt & it started all over again. If you can solve that one you've got me.

It's not true what you say about public institutions and I know. They're all right in hopeless cases, certainly they're better than little say private clinics, but in case like Zelda's, who's as sane as you and me part of time it would be the end of hope and struggle. I had a moment of discouragement last fall when my own health failed again & I wrote those Esquire articles—but that moment has passed & unless there's some bad break another month should see the worst over & Scotty's and my standard of living reduced to the lowest point consonant with my work.

I'm terribly sorry about Anna and Charlie (You are lucky to have a good constitution). That seems to be the great place for asthma—wasn't Anna cured there before—and I hope you'll be reunited soon. This stilted style is the result of long days work and doesn't express my sympathy—give her my love when you write.

I shall be here till June 10th (The address is The Cambridge Arms, Charles at 34th). I shall try to get there, and I don't forgive you for never calling me when you're in Baltimore. My phone is under the name of the appartment [sic]." In fine condition, with intersecting folds, some light wrinkles and creases, and tape remnants to reverse top edges of both pages.

Fitzgerald wrote this letter in the spring of 1935, when he was living in Baltimore; it's written to John Biggs (Princeton Class of 1918) who was Fitzgerald's roommate at Princeton, and later served as executor and trustee of Fitzgerald's estate. By his "invalid" he meant his estranged wife Zelda, who was first struck by schizophrenia in 1930 and was thereafter hospitalized throughout the 1930s. Fitzgerald had finished Tender is the Night in Baltimore, and it was published in 1934 to mixed reviews. The semi-autobiographical novel tells the story of a psychiatrist nearly ruined by his mental patient wife. Realizing that the novel would not solve his financial troubles, Fitzgerald sought to write himself out of debt with magazine stories. He published several pieces in Esquire that fall, including the essay "Sleeping and Waking" and two short stories, "The Fiend" and "The Night Before Chancellorsville."

Fitzgerald was notorious for his extraordinarily heavy drinking, which took a heavy toll on his health. He also suffered from recurrent tuberculosis, and went to North Carolina to seek treatment with his daughter Scottie in February 1935. He wrote "Lo, the Poor Peacock!" that month, a story about a man ruined by the Depression who tries to raise his daughter while his wife is hospitalized. After returning to Baltimore, tests showed his tuberculosis as inactive, but x-rays revealed progressive lung damage. He returned to North Carolina again that summer.

A Fitzgerald letter of this length and content is extremely rare. Providing insight into the writing of one of his greatest works, as well as discussing his drinking problem, deteriorating health, and disastrous marriage, this singular letter would be a crowning jewel of any 20th century literary collection.