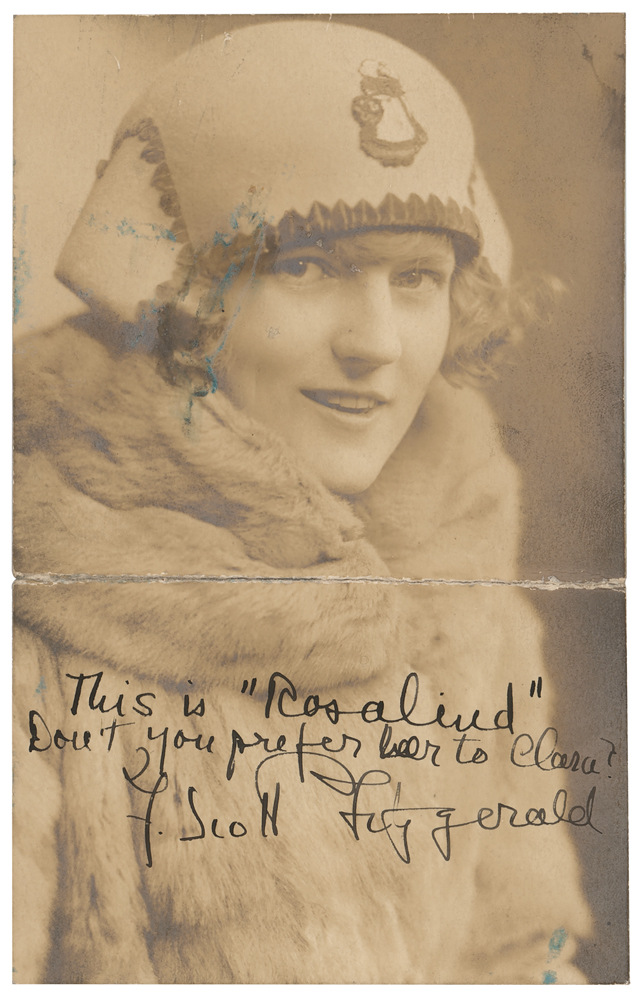 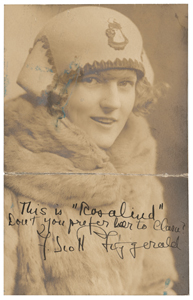 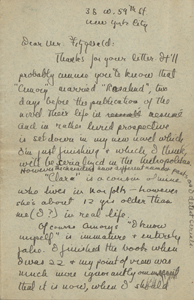 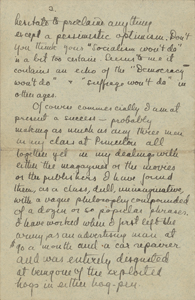 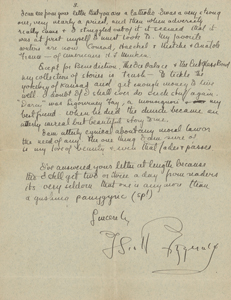 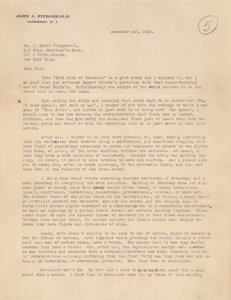 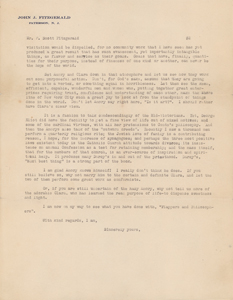 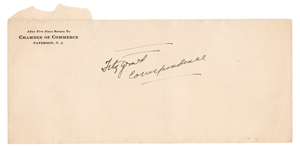 Remarkable pairing of two items signed by F. Scott Fitzgerald: a matte-finish 3.5 x 5.5 photo of Zelda Sayre Fitzgerald, boldly signed in fountain pen with a reference to This Side of Paradise, "This is 'Rosalind,' don't you prefer her to Clara? F. Scott Fitzgerald"; and an ALS, four pages on two adjoining sheets, 4.5 x 7, no date but circa late 1920, to "Mr. Fitzgerald," replying to commentary on This Side of Paradise, in which the protagonist 'Amory Blaine' was based upon himself, and the character 'Rosalind Connage' was based on Zelda.

In part: "It'll probably amuse you to know that 'Amory' married 'Rosalind,' two days before the publication of the novel...'Clara' is a cousin of mine who lives in Norfolk...Of course Amory's 'I know myself' is immature & entirely false. I finished the book when I was 22 & my point of view was much more ignorantly omniscient than is is now, when I should hesitate to proclaim anything except a pessimistic optimism. Don't you think your 'socialism won't do' is a bit too certain. Seems to me it contains an echo of the 'Democracy won't do' & 'Suffrage won't do' in other ages.

Of course commercially I am at present a success—probably making as much as any three men in my class at Princeton all together yet in my dealings with either the magazines or the movies or the publishers I have joined them, as a class, dull, unimaginative, with a vague philosophy compounded of a dozen or so popular phrases. I have worked where I first left the army, as an advertising man at $90 a month and a car repairer and was extremely disgusted at being one of the exploited hogs in either hog-pen.

I can see from your letter that you are a Catholic. I was a very strong one, very nearly a priest, and then when adversity really came & I struggled out of it it seemed that it was at first myself I must look to. My favorite writers are now Conrad, Heackel & Nietche & Anatole France—of Americans H. L. Mencken.

Except for Benediction, The Ice Palace, & The Cut Glass Bowl my collection of stories is trash—to tickle the yokelry of Kansas and get enough money to live well. I doubt if I shall ever do such stuff again. 'Darcy' was Sigourney Fay, a monsignori & my best friend. When he died the church became an utterly unreal but beautiful story to me."

The letter is in fine condition; the small signed photo is very good, with complete separation across its center (repaired with archival tape on the reverse). Accompanied by a carbon copy of John J. Fitzgerald's two-page letter to F. Scott Fitzgerald that elicited this exceptional response, and an envelope marked "Fitzgerald Correspondence" in an unknown hand.

Though Fitzgerald dropped out of Princeton to join the Army in 1917, his university years permanently shaped his life and career; it was in this world of privilege that he devoted himself to finding his voice as a writer. Drawing inspiration from the people he knew in real life, Fitzgerald drafted This Side of Paradise after a breakup with Zelda. He hoped it would make him a famous novelist and help win her back—a successful endeavor, as he notes that "that 'Amory' married 'Rosalind,' two days before the publication of the novel." He also makes reference to his favorite cousin, Cecilia Delihant Taylor, upon whom 'Clara' was based. In 1919 Scribner's accepted his manuscript for This Side of Paradise on its third submission, and the book was released to wild success the following year. The notoriously acerbic H. L. Mencken, who Fitzgerald here recognizes as his favorite American writer, offered high praise for his debut as 'best American novel that I have seen of late.'