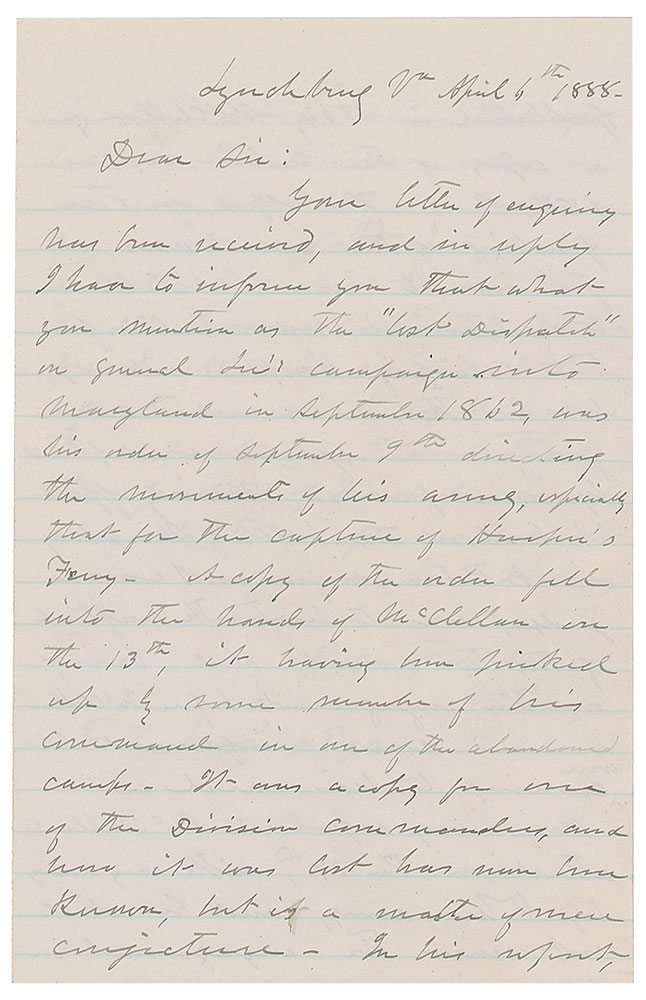 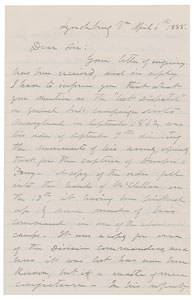 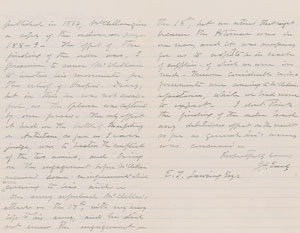 Phenomenal ALS signed “J. A. Early,” three pages on two adjoining sheets, lightly lined, 5.75 x 9, April 6, 1888. Letter to E. T. Lansing, in full: "Your letter of inquiry has been received, and in reply I have to inform you that what you mention as the 'lost dispatch' in General Lee's campaign into Maryland in September 1862, was his order of September 9th directing the movements of his army, especially that for the capture of Harper's Ferry. A copy of the order fell into the hands of McClellan on the 13th, it having been picked up by some member of his command in one of the abandoned camps. It was a copy for one of the Division Commanders, and how it was lost has never been known, but is a matter of mere conjecture. In his report, published in 1864, McClellan gives a copy of the order in pages 188-9. The effect of the finding of the order was, I presume, to cause McClellan to hasten his movements for the relief of Harper's Ferry, but in this he was not successful as the place was captured by our forces. The only effect it had in the battle of Sharpsburg or Antietam, so far as I can judge, was to hasten the conflict of the two armies, and bring on the engagement before McClellan received some re-inforcements—which were coming to his aid. Our army repulsed McClellan's attacks on the 17th, with very heavy loss to his army, and he did not renew the engagement on the 18th, but we retired that night because the Potomac was in our rear, and it was necessary for us to cross it to be in reach of supplies. Moreover considerable re-inforcements were coming to McClellan's assistance, which we had come to expect. I don't think the finding of the order had any deleterious effect on the result so far as General Lee's army was concerned." In fine condition. Accompanied by the original mailing envelope, addressed in Early's own hand.

On September 9, 1862, General Robert E. Lee issued to his Confederate commanders Special Order 191. Also known as ‘the Lost Dispatch’ or ‘the Lost Order,’ the tactical document laid out Lee’s plans to divide his army into two parts, with General ‘Stonewall’ Jackson leading two-thirds of the troops to capture Harpers Ferry, and Lee marching the remaining soldiers 24 miles northwest to Hagerstown. The fortuitous discovery of 191 at a vacated Confederate camp on September 13, only four days before the Battle of Antietam, proved a stroke of providence for Union General George B. McClellan, who, in his excitement, asserted: ‘Here is a paper by which if I am unable to whip Bobby Lee, I will be willing to go home.’ However, McClellan’s decision to wait 18 hours before repositioning his forces afforded Lee, now privy to the Union intelligence, ample time to appropriately re-strategize. Early’s doubts that “the finding of the order had any deleterious effect” on Lee’s army are not without weight; McClellan’s hesitation to take advantage of 191 squandered any chance of a resounding Union victory, a reluctance which enabled Lee to more effectively maneuver his greatly outnumbered forces and then, with victory out of reach, successfully withdraw to Virginia.