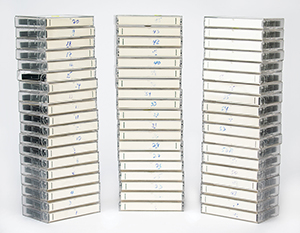 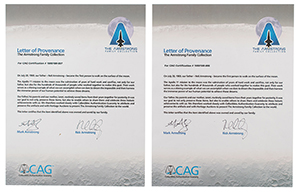 An extraordinary archive of material related to Buzz Aldrin's 1973 best-selling biography Return to Earth, including Aldrin's letter to Neil Armstrong about the project, Armstrong's handwritten draft of his reply, and a collection of 57 audio tapes dictated by Aldrin which were used to write the book. Includes:

TLS signed "Buzz," one page, Research and Engineering Consultants., Inc. letterhead, September 7, 1973, to Neil Armstrong. In full: "As you've no doubt heard by now, I've written a book called 'Return to Earth.' Its about to be published and Random House has assured me they're sending a copy to you and Jan. I hope you like it. I also hope you will consent to a fair and dignified depiction in a film version which is now being discussed with a reputable producer. I would like to hear from you and get your comments after you have read the book." Encapsulated by CAG as from the Armstrong Family Collection, and accompanied by a letter of provenance signed by Neil Armstrong's sons Mark and Rick.

Handwritten draft by Neil Armstrong in response to Aldrin's letter, written in red pencil on a lined sheet, circa 1973, in full: "I have delayed much too long in answering your note, primarily because I was unable to find a suitable reply. In all honesty, I believe that a movie of 'Return to Earth' would not be good for you. I can't think of a biography of a living person that has ever been made into a good flick. That makes pretty long odds. I know that if you decide to go ahead, you can do so with or without my concurrence. I do hope you will think it over carefully before you decide. All is well here on the farm. We have ice on the pond and suspect the Armstrong hockey league will begin earnest this week. Janet joins me in sending all the Aldrins our very best wishes for the Holiday season." Encapsulated by CAG as from the Armstrong Family Collection, and accompanied by a letter of provenance signed by Neil Armstrong's sons Mark and Rick.

An utterly unique collection of 57 first generation audio cassettes dictated by Buzz Aldrin, and used to write his 1973 best-selling biography Return to Earth. Each Supertape LN-60 tape is full of hours of personal recollections and experiences from Aldrin’s life from his early years all the way through his historic moon flight, as well as what the fame of that mission did to him and his family, including never-before-heard insights and revelations from Aldrin’s extraordinary life. A treasure trove of stories waiting to be discovered listening to these tapes—all in the voice of one of the first men to land on the moon.

In overall very good to fine condition, with fading and toning to the Armstrong letter, rendering it somewhat difficult to read.