Rare candid photograph of Oskar Schindler, annotated on the reverse by the WWII hero 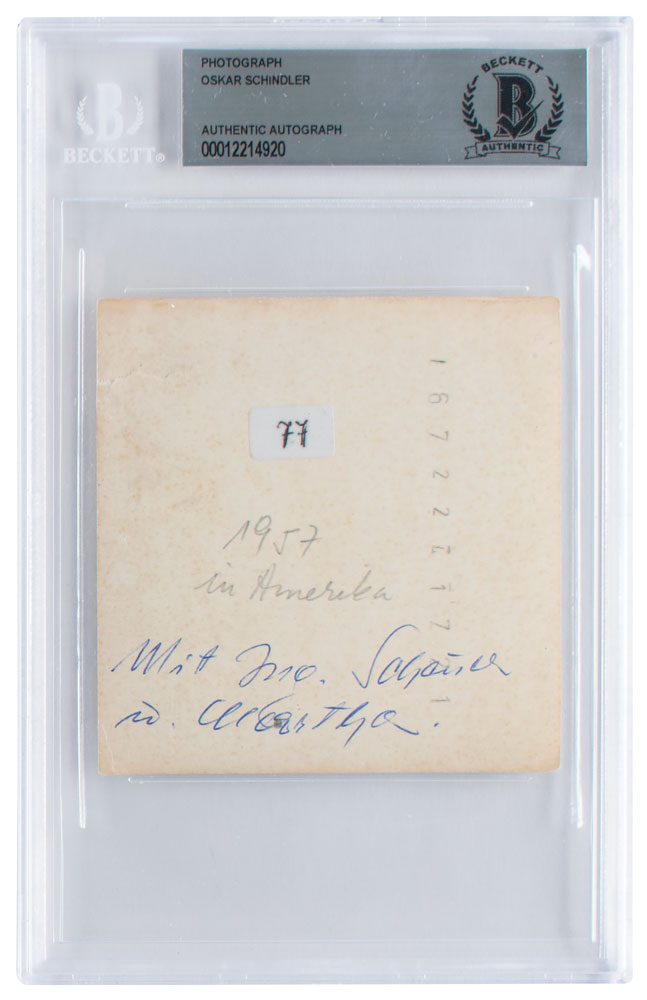 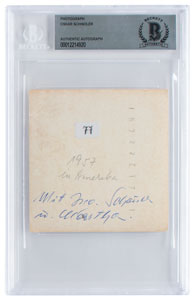 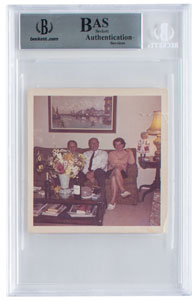 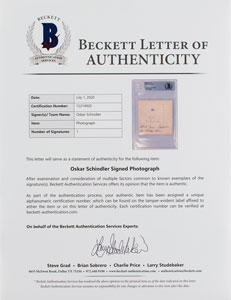 Rare candid photograph of Oskar Schindler, annotated on the reverse by the WWII hero

German industrialist (1908-1974) credited with saving almost 1,200 Jews during the Holocaust by employing them in his enamelware and ammunitions factories. Color vintage glossy 3.5 x 3.5 photo of Oskar Schindler seated between two friends while visiting America in 1957, annotated on the reverse in Schindler's hand. In very good to fine condition, with a tear to the upper right edge, passing through the top of the lampshade. Encapsulated by Beckett Authentication Services and accompanied by a full letter of authenticity from Beckett.

Accompanied by several documents from the lives of Oskar and Emilie Schindler:

Two boarding cards listing "Schindler Oskar" and "Schindler Emilie" as passengers, dated October 4, 1949, departing Italy and heading to various cities in Argentina, with legal stamps. The cards are split up by gender: women on one card, men on the other. They traveled with several others including Izak Korczyn, Edmund Horowitz, and other Jews that previously worked for him at his German factories, which he subsequently saved from the Nazi concentration camps. The Schindlers, concerned of possible arrest for war crimes, moved to Argentina, where Oskar attempted new business ventures during this period of his life post-WWII.

Medical card for Emilie Schindler, issued by the Delegacion of Argentina, dated October 10, 1949. On the reverse in a small pocket is an original black and white lung X-Ray slide for Emilie.

Oskar and Emilie had exhausted their savings in their work to save 1,200 Jews via their enamelware factory during World War II, and in 1949, with financial help from a Jewish organization, moved to Argentina to begin farming. By 1957, however, Oskar Schindler had become bankrupt and returned to West Germany alone—he never saw his wife again, although they remained married. His heroics during World War II were immortalized in the famous 1993 film Schindler's List.