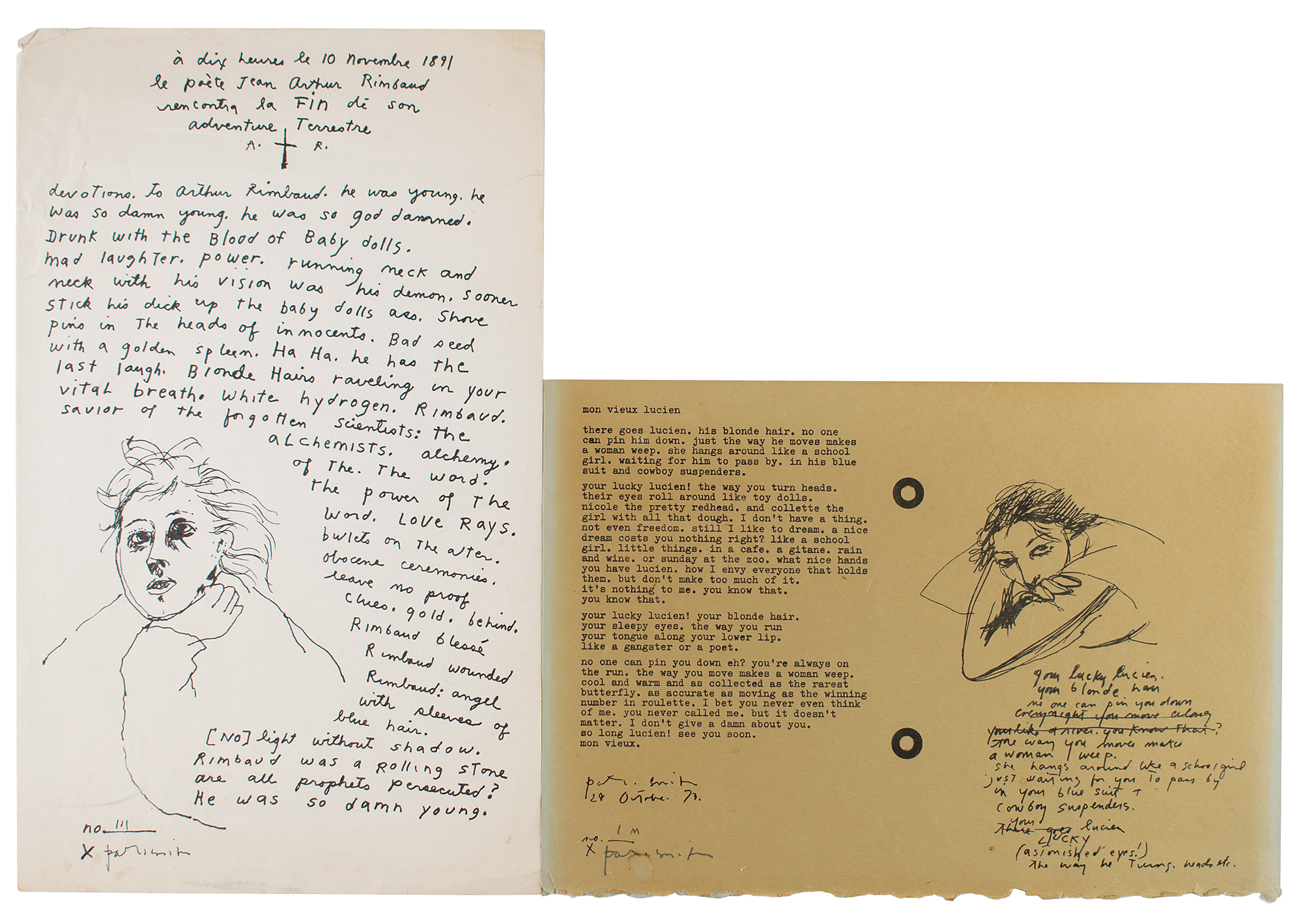 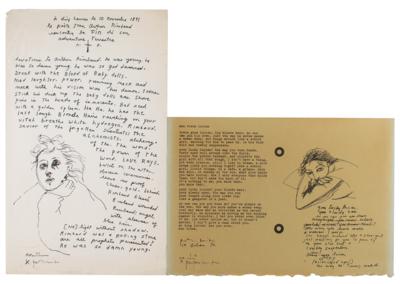 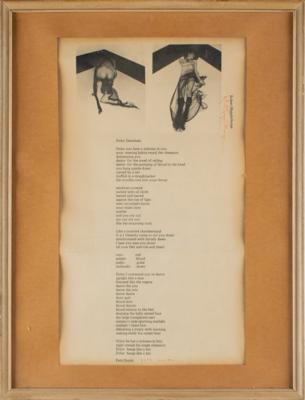 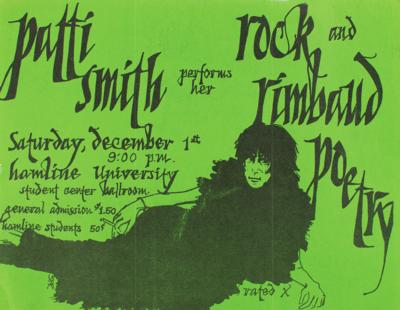 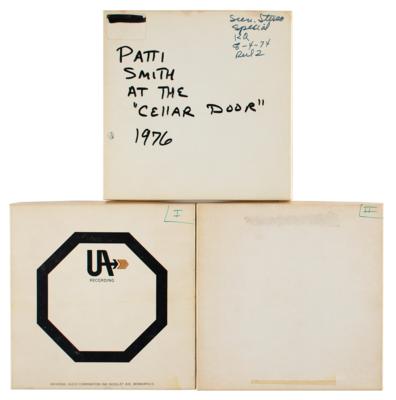 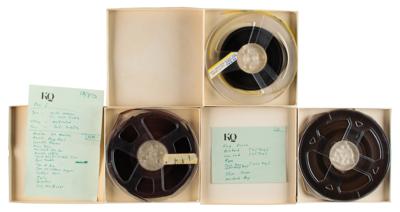 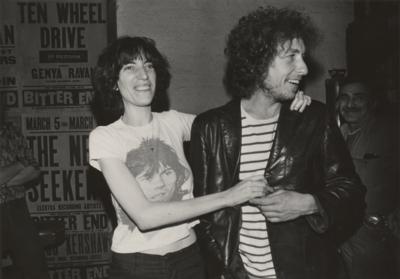 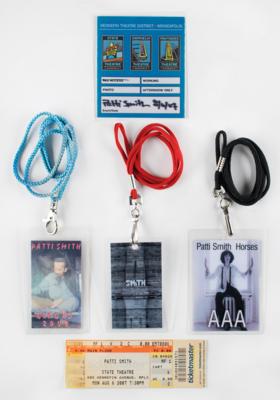 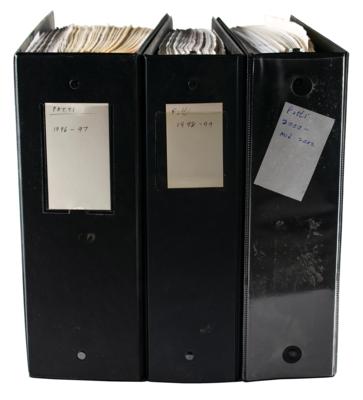 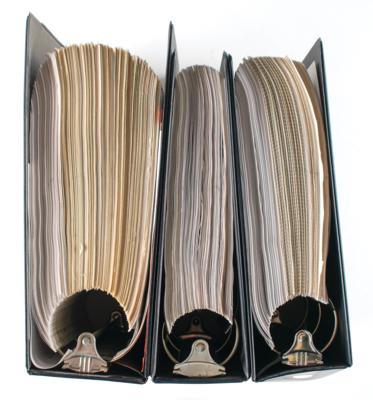 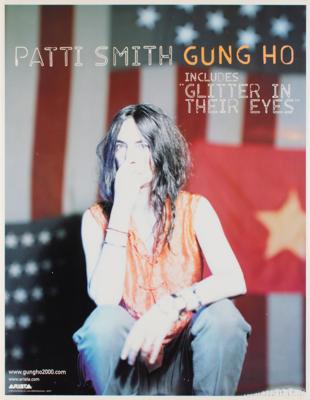 Archive of material related to poet and singer-songwriter Patti Smith, which is highlighted a group of five rare limited edition prints of her lyrics, each signed below in ink by Smith, including: three early broadsides entitled ‘Mon Vieux Lucien,’ each 12 x 8.25, originally printed and distributed by The Gotham Book Mart in a total edition of 300 copies, with 50 signed and numbered and the rest unsigned. Smith has signed each in the lower left corner, numbering them as follows: “1 m,” “3 m,” and “11 m w/ dirt stains.” The “3 m” print is framed to a slightly larger size. The fourth is a print entitled ‘Devotions to Arthur Rimbaud,’ 8.5 x 14, numbered “III,” and signed in the lower left corner; and the fifth is a collaborative broadside between Smith and photographer Robert Mapplethorpe entitled ‘Dolor Desvelado,’ 7.75 x 13.75, which is signed below by Smith and in the upper right by Mapplethorpe. The latter broadside is matted and framed to an overall size of 12.75 x 16.75.

Also featured in the collection:

A copy of Smith’s original review for Bob Dylan’s album Planet Waves, accompanied by the original mailing envelope addressed in the hand of Smith, who incorporates her signature into the return address field. Includes a glossy 7 x 5 photo of Smith and Dylan posing together, with the reverse bearing a Chuck Pulin stamp.

Three reel-to-reel tapes dated between 1972 and 1976, containing recordings by Smith: one is marked as “Patti Smith/King Biscuit Hour, January 8, 1976;” and the second and third tapes, dated December 3, 1972, feature titles of poems from Smith’s poetry collection, Seventh Heaven, in addition to some not listed on the final published version.

A color 17 x 22 Arista Records promotional poster for Smith’s 2000 album Gung Ho, which mentions the single ‘Glitter in Their Eyes.'

An Arista Records 45 RPM record for the single ‘Because the Night / God Speed,’ with disc included.

A German pressing of The Viking of Sixth Avenue by Moondog, with a handwritten note.

PHTP fanzines from June and October 1997.

An assortment of Patti Smith Group (PSG) press release material from circa 1979.