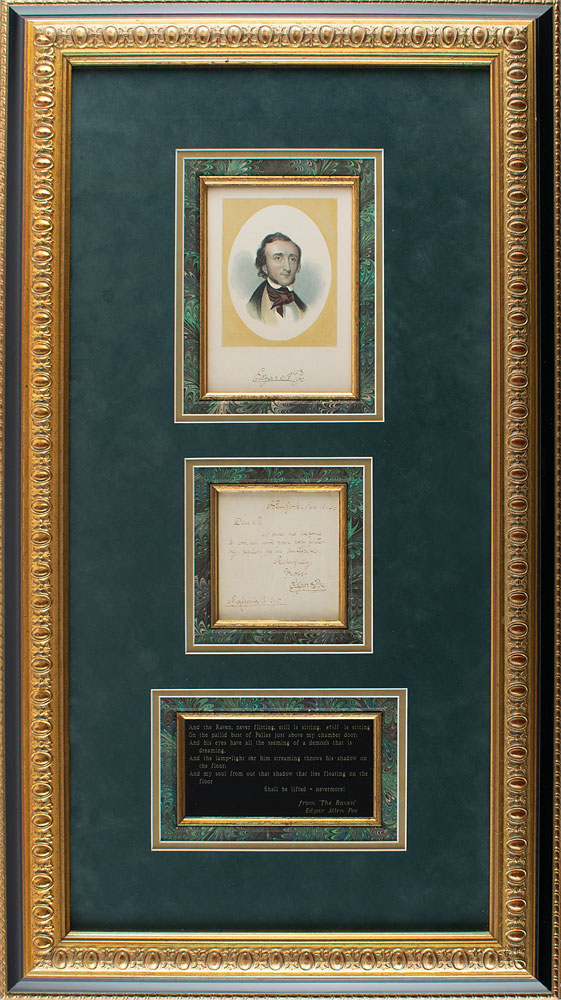 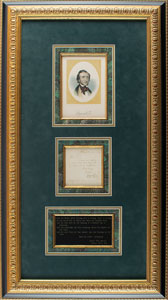 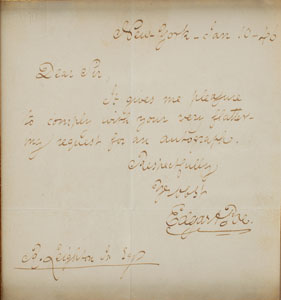 Rare ALS signed “Edgar A. Poe,” one page, 4 x 4.25, January 10, 1846. Written from New York, a brief letter to collector "R. Leighton, Jr. Esq.," in full: "Dear Sir, It gives me pleasure to comply with your very flattering request for an autograph. Respectfully, Yr ob st." Archivally matted and framed with an engraved portrait and a passage from Poe's classic The Raven to an overall size of 18.75 x 33.5. In fine condition.

Following the demise of his short-lived newspaper the Broadway Journal, Poe, with his wife Virginia Clemm and her mother Maria, around May 1846, departed Turtle Bay and moved into a cottage on two acres of land in Fordham, New York. The rural setting and the cottage’s quaint charms appealed to the family greatly, and Poe’s final short story, ‘Landor’s Cottage,’ published not long before his passing in 1849, is presumed to have been inspired by the home. It was also where Poe wrote the classic tale The Cask of Amontillado, the poems 'The Bells,' ‘Annabel Lee’ and ‘Ulalume,’ and where he published his gossip series on ‘The Literati of New York City.’ Only our sixth handwritten Poe letter, and our first in five years.

This letter has been documented by the Edgar Allan Poe Society of Baltimore.