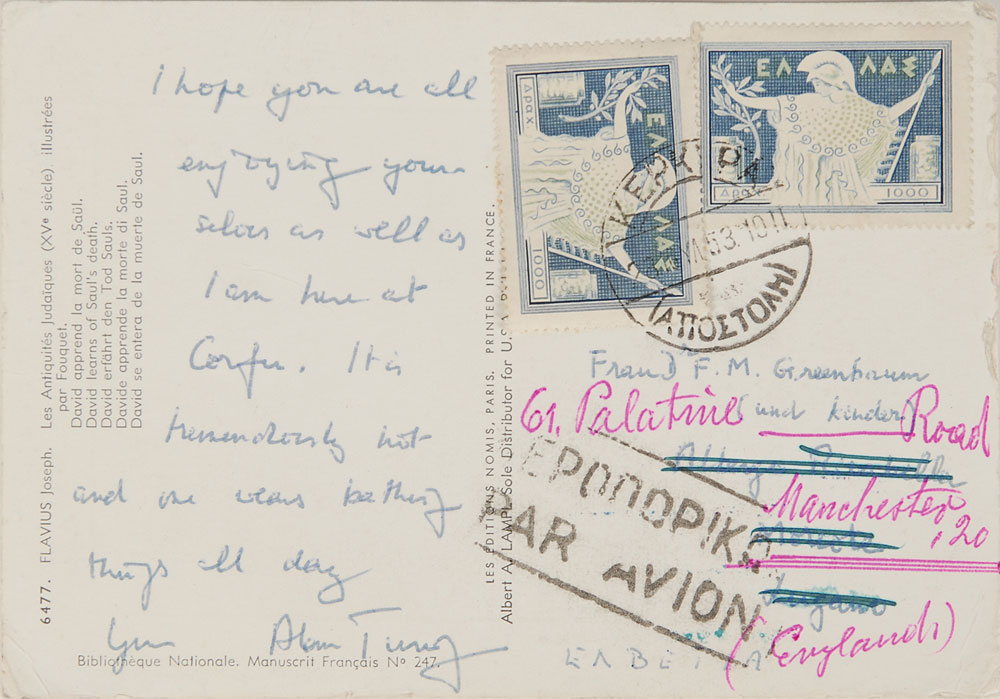 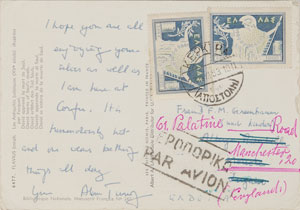 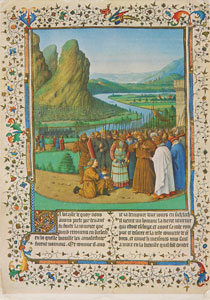 Immensely influential British mathematician, cryptanalyst, and computer scientist (1912-1954) considered the father of theoretical computer science and artificial intelligence; in 2019, it was announced that he would appear on the new £50 banknote, reflecting his importance in history. Extremely rare ALS, signed "Alan Turing," one page on a 5.75 x 4 color postcard depicting an illuminated manuscript from Flavius Josephus' Antiquities of the Jews, July 23, 1953. Letter to "Frau Dr F.M. Greenbaum (und Kinder)," sent from his Club Mediterranee holiday on Corfu. In full: "I hope you are all enjoying your selves as well as I am here at Corfu. It is tremendously hot and one wears bathing things all day." In fine condition. Turing became a patient of the Jungian psychologist Dr. Franz Greenbaum in 1952, and became a friend of the family; in a letter from July 10th, he had written to the doctor's daughter, Maria Greenbaum, about solving a solitaire puzzle. In Sara Turing's pioneering 1959 biography of her son she noted that he 'normally shirked letter-writing,' and his autograph is indeed incredibly scarce in any form.

What is especially notable about this example is the unexpected religious imagery, as Turing was an atheist. The first-century Romano-Jewish scholar Flavius Josephus, who commanded the Jewish forces at the Siege of Yodfat, is the namesake of the ‘Josephus Problem’ in computer science. Josephus describes a ‘counting-out game’ by which he and his soldiers, facing inevitable defeat, agreed upon an unusual suicide pact rather than surrender. Standing in a circle, the first soldier killed the man to his left. The next surviving soldier then killed the man to his left, and this pattern continued until Josephus was the lone survivor. The problem is thus: faced with the same situation, how could you determine where to position yourself in order to be the last man standing? Turing, who was fascinated by these types of algorithmic puzzles, surely knew of the ‘Josephus Problem’ and it is likely the reason he chose this specific postcard. More poignantly, it dates to less than a year before Turing's own suicide—something he may have already been considering when he went to Corfu. Connecting mathematics through the ages, this is a truly remarkable piece.