Fatherly advice for Samuel Bard, who would become George Washington's personal physician—"It is highly Imprudent and little short of madness for a young gentleman to precipitate himself into a married state eggd on by a barbarous & unreasonable Passion" 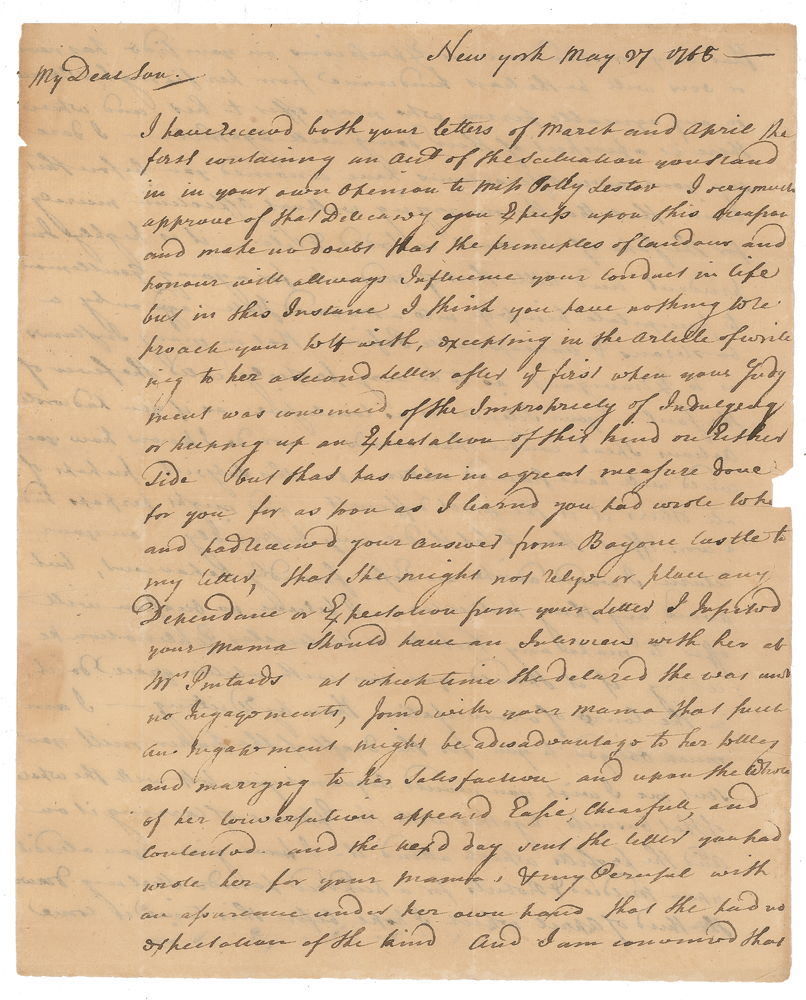 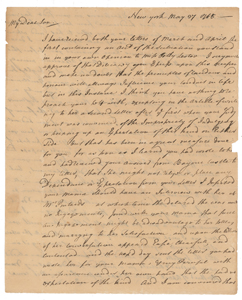 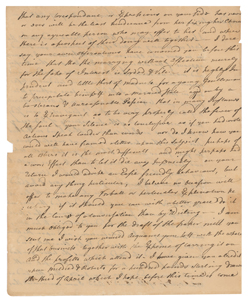 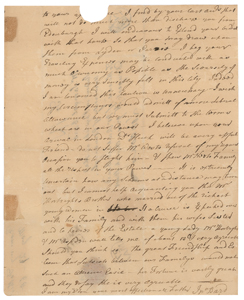 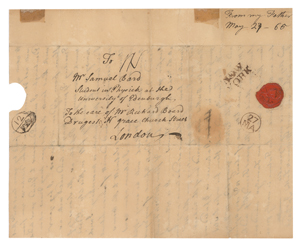 Fatherly advice for Samuel Bard, who would become George Washington's personal physician—"It is highly Imprudent and little short of madness for a young gentleman to precipitate himself into a married state eggd on by a barbarous & unreasonable Passion"

ALS signed “Jno. Bard,” three pages, 7.25 x 9, May 27, 1765. Letter to "Mr. Samuel Bard, Student in Physick at the University of Edinburgh," written by his father John, in full: "I have received both your letters of March and April the first containing an acct of the situation you stand in in your own opinion to Miss Polly Lester I very much approve of that Delicacy you Express upon this occasion and make no doubt that the principles of candour and honour will allways Influence your conduct in life but in this Instance I think you have nothing to reproach your self with, excepting in the article of writing to her a second letter after ye first when your Judgment was convinced of the Impropriety of Indulging or keeping up an Expectation of this kind on either side but that has been in a great measure done for you for as soon as I learned you had wrote to her and had received your answer from Bayone castle to my letter, that she might not relye or place and Dependence or Expectation from your letter I Insisted your mama should have an Interview with her at Mrs Pintards at which time she declared she was under no Ingagements, joind with your mama that such an Ingagement might be a disadvantage to her and marrying to her satisfaction and upon the whole of her conversation appeared Easie, chearfull, and contented, and the next day sent the letter you had wrote her for your mama, & my Perusal with an assurance under her own hand that she had no expectation of the kind and I am convinced that any correspondence or Expressions on your side has never or ever will be the least hindrance from her fixing her choice on any agreeable person who may offer to her and where there is a prospect of their doing well together. I dare say your own observations have convinced you before this time that the marrying without affection merely for the sake of Interest is sordid, & vile. it is highly Imprudent and little short of madness for a young gentleman to precipitate himself into a married state eggd on by a barbarous & unreasonable Passion. that in many Instances is to Extravagant to be very properly called the fever of the soul. your Silence is as conclusive as if you had wrote actions speak louder than words nor do I know how you could well have framed a letter upon this Subject perhaps of all others it is the most difficult and might perhaps had a wors effect than to let in die away insensibly. on your return I would advise an Easie friendly behavior, but avoid any thing particular. I believe no occasion will offer to make Verball or particular explination necessary if it should you can with a better grace do it in the course of a conversation than by Writing. I am much obliged to you for the draft of the paper mill you sent me I wish you would acquaint your self with the whole of that business together with the Expence of carrying it on and the profits which attend it. I have given you a Credit upon Mildred & Roberts for a hundred pounds Sterling drawn the third of April which I hope before this time is come…

I find by your last accts that will not do much more than discharge you from Edinburgh I will endeavor to Extend your credit with that bank so that you may draw upon them from Lyden or Paris. I beg your Traveling Expenses may be conducted with as much oeconomy as Possible as the Scarsity of money is very sensibly felt in this city Indeed I am honoured this caution is unnecessary. I wish my circumstances would admitt of a more liberal allowance but we must Submitt to the terms which are in our Power. I believe upon your arrival in London Dr Huck will be a very useful Friend. do not suffer Mr Wests refusal of my request occasion you to slight him, & shew Mr Hoels Family all the respect in your Power. It is extremely uncertain how any Scheems at a distance may turn out but I cannot help acquainting you that Mr Hartrights Brother who married one of the richest young women in Sta Cruise is Expected over with his Family and with them his wifes Sister and co heiress of the Estate a young Lady Mrs Hartright & Mrs Aspdenwall tells me of about 13 & very agreeable Should you think so the Great Friendship and Esteem that subsists between our Familys would make such an Allience Easie. her Fortune is vastly great and they do say she is very agreeable." In very good condition, with almost complete separation (and some old tape) to the hinge, and seal-related paper loss to the integral address leaf affecting one word of text.

John Bard (1716-1799) was born in New Jersey, but his father died when he was young. His mother sent him to Philadelphia, and he was apprenticed to an English surgeon for seven years. He became acquainted with Benjamin Franklin and opened his own medical practice in 1737. In 1740, he married the niece of his master. In 1743, Franklin suggested that he might have better prospects in New York City, where two prominent physicians had recently died. He followed Franklin’s advice and established a successful practice in New York. He became the first president of the New York Medical Society.

Samuel Bard (1742-1821) was born in Philadelphia as the son of Dr. John Bard and graduated from King’s College (Columbia University) in 1758, before traveling to Europe for a medical education. He spent five years in France, England, and Scotland, and earned his M.D. at the University of Edinburgh in 1765. When he returned, he entered into partnership with his father. He married his cousin Mary Bard (1746-1821), and they had six children. Samuel Bard founded the first hospital in New York City in 1769 and formed the plan for a medical school. He left the city during the Revolutionary War, but he soon returned to secure his property and worked as a physician while the British occupied the city. After the war, George Washington selected Bard as his personal and family physician while in New York. In 1791, he helped found the New York Medical School at Columbia College.